“Tell Them of Battles, Kings, & Elephants” by Mathias Énard 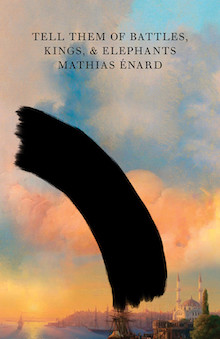 Énard is a Very Important Author indeed. He belongs on the stage with Pamuk, T Morrison, Morante, Okri, Delillo, J. Marías, Vargas Llosa, D. Ugresic, Murakami, and Lianke. Yes, there are others. Some younger writers too rising in relevance, audience, voices in need of hearing, such as Teju Cole, Laila Lalami, Valerie Luiselli, Rodrigo Fresán, and Han Kang. They and many others tell stories well, but also address the worlds they inhabit, engage in ideas, non-simplistic ethics, and emotions. They help us to better understand our world, ourselves, our histories common and divergent, and some help us understand people who are other than ourselves.

But Énard is in a striking way a person for his times. He writes in his native French and has lived in Barcelona for 15 years. Previously, he intentionally sought out an education in Arabic and Persian, and has lived for extended periods in Iran, Syria, and Lebanon. He probably has equals—more likely immigrants who have come those places to Europe and the Americas—but I bet no one can surpass his bona fides as a writer on the range of subjects—“the zone,” with which he deals.

This historical novel imagines Michelangelo leaving the frustrations of royal and papal patronage that only sometimes comes with the needed funds to eat and make art. He slips away to Constantinople to take up the Sultan’s commission of designing a bridge across the Golden Horn, physically uniting the European and Asian sides of that city. Di Vinci, the older rival of Michelangelo, had actually attempted the same project—in verifiable historical record—but it was never built. Énard suggests that the Sultan found the design inelegant, although historians of architecture have said it was unbuildable (until it actually was built according to di Vinci’s plans though somewhere in Scandinavia, about 20 years ago).

The novel succeeds on its own merits as a good story, well told. Michelangelo takes on believable flesh and blood, interacts with his guide—an actual poet of that time and place who in the novel falls in love with Michelangelo. While the landlord of his living space is not as well realized, we are introduced to a merchant who trades between Venice and Constantinople, with profitability as his guide for allegiances. An androgynous muse, a voice in the night, comes to Michelangelo’s bed after earlier dancing and serving food and tea. This woman—the sex of the person not revealed to Michelangelo or reader until at least half-way through—brings reflection, perspective, and speaks the same words as the title.

Some years ago I stood in line at a bookstore in DC. Behind me a woman explained to her father at great length how the book she was buying for him, Dan Brown’s Di Vinci Code, was so . . . everything. I couldn’t hold back after a while, and turned and said something about the book actually being a novel, fiction. She sniffed in response and replied that she believed in it, all of it. Tom Hanks then starred in the documentary.

A curious critical echo of that Brown follower attaches to this book. I’ve been reading other notices and reviews of this Énard title. It made quite a few year-end lists for 2018. Other titles of his have been reviewed. I’m sure the significant number of said reviews has nothing to do with it being short, and in the U.S. a hardcover with great cover art was released just before Christmas. And it’s about Michelangelo . . . we like him. We like things with him in them. Like Irving Stone’s The Agony and the Ecstasy (movie starring Ben-Hur Moses Charlton Heston), the David, a pieta sculpture which was vandalized by a hammer wielding unstable man. The ceiling of the Sistine Chapel.

Here’s the thing though: Michelangelo didn’t actually go to Constantinople, although the invitation was actually proffered by the Sultan in real life, with the enticement of a big pay off. Michelangelo was miffed with the pope, who had asked for a grand funeral monument but had provided little funds; the artist went to Florence instead in a sulk until papal emissaries brought him back to Rome and the pope finally granted an audience and money.

Énard even has a postscript where he lays out the “well, it could have happened this way.” To the author’s credit, he has told a tale compelling enough for some critics—not many, but at least three I’ve found—who buy it, that the artist truly made this journey. The matter is not trivial though, based in Énard’s larger project. These critics make the claim that Michelangelo’s trip to Constantinople then shaped his imagination, introduced a bit of Oriental spin and flavor to his art that followed, without actually pointing to specific works. Because they can’t. Because he didn’t. Énard is a thoughtful critic of just such Orientalism, the romanticizing of the East. His life and his work from the European side of matters are uniquely situated to reflect on some of the most consequential issues and events we are living through.

Of those authors named at the beginning of this post, some have a distinctive style—Marías’s long and descriptive sentences, which slow the pace of reading; Murakami’s surreal universe. Énard, though, seems closer to early Delillo: the scifi Ratner’s Star, the urban detective story Great Jones Street, a football novel, a philosophical one which looks at language (The Names, still my favorite of his). Each of Énard’s books address the zone of time and space and ideas of Western European culture and those of the Arabian peninsula, North Africa, the Balkans. However, each does so in with both a focus and variation in style.

The title Tell Them of Battles, Kings, and Elephants tips the author’s hand: a quote from Rudyard Kipling, written about the Raj, the colonized India of his day, stories of wars, exotic royalty, wonderous beasts. Énard’s title, and the same phrasing late in the novel, should put the reader on high alert. In case we’d miss the source, it is also the epigraph of the novel attributed to Kipling.

Four of Énard’s nine books are in translation in English. Zone, Compass, Street of Thieves, and now, this present book. Each have different settings, eras portrayed. An aged musician takes stock of his life and love in Compass. Franz is an Austrian who has specialized in looking at how music, East and West, have influenced, interpenetrated the cultures of one another; Sarah, his romantic fixation is a historian about the same matters beyond music. In Street of Thieves, a young man and his best friend live in our post 9/11 world, with the Arab spring reaching the streets of Tangier, Morocco where they both live. They take divergent paths in, one radicalized, the other rootless as he travels and witnesses contemporary events in Morocco, Tunisia, and Spain.

Zone is remarkable for being one, long sentence, albeit with chapter breaks. The protagonist has missed his flight from Amsterdam to the Vatican, so he is on a train with briefcase full of documents, photos, and accounts of some of the late twentieth century’s worst atrocities, bad actors, and his role as actor/witness, specifically in Bosnia/Serbia/Croatia. The former Yugoslavia becomes a microcosm for contemporary fault lines between peoples’ faiths and historical memories that never become left in the past.

However “the zone” is also a concept that Énard uses to point toward the Mediterranean region of countries, and those immediately contiguous. Some of what Énard points toward is the Orientalism of Edward Said’s critique several decades on now. Énard in an interview has expressed some ambivalence about Said, saying that Said raised up the concept of Orientalism—the mother of all cultural appropriations in the nineteenth and twentieth centuries—but in so doing actually perpetuated it.

Instead, Énard claims that all of Europe is the Orient: the interpenetrations of cultures through invasions north and south, European, Asian, North African, Arabian throughout history have also opened the way for intellectual exchange. Also come the facile cultural adaptations. Disney’s Aladdin—the mystic, aromatic, cue the minor-key and unmistakable horns, land of genies, 1001 stories, Sinbad, and so forth. The Victorians had their own versions, probably no less kitschy and superficial, but with a big dose of colonialism. Rumi is a go-to poet for some time now at weddings that tilt toward the secular. He warrants almost a whole shelf alone in the poetry section of bookstores, kind of astonishing for a thirteenth century poet from Afghanistan writing about a break-away version of Islam.

In the world of Tell Them, the bridge is never built. Michelangelo was only charged with the design, not the construction of this fictional bridge. In Énard’s postscript, he combines fact, the “it-could-have-happened,” with a report of the completion of the first steps of the bridge construction, only for it to be washed away by torrential rain and floods, and overshadowed by the Sultan’s preoccupation with other, more pressing matters. This failed bridge can stand for some of the surrounding tensions, miscommunications, and worse: the European side of the city, now Istanbul, is where the Blue Mosque, the Ottoman palace, and the Hagia Sophia are. On the Asian side is the Galata Tower built by late medieval Genoese of Italy, and the side to which Michelangelo travels in the novel to attend Mass. Europe and Asia, east and west, linked but not, inhabiting one another’s worlds.

As stand-alones, Énard’s books are interesting and engaging. Intellectually they engage us as an oeuvre—at least for those of us who rely on translations—as they mutually inform one another as part of a grand project. Gone though are the days when singular voices could claim the authority of the last word on a matter. Marx and Keynes cast large shadows over contemporary economists. Einstein is followed by Hawking/Sagan/Tyson. Tillich and Niebuhr have no real successors because we can not systematize as we once did. The modernist approach, the last ditch effort to hold all of our life together by even imaginary systems, has sputtered out. Nietzsche and Wittgenstein lack any equals today.

But the great news is that we do get Énard AND Laila Lalami, Sinan Antoon, Darwish, Castel-Bloom, Tayeb Salih, and so many more already available to us in English translation. As well as a world of writers famous and influential in their own countries, cultures, whom we might be fortunate to meet in print one day.

One response to ““Tell Them of Battles, Kings, & Elephants” by Mathias Énard”