In celebration of the release of 77 on Tuesday, February 12, we’ve decided to make Guillermo Saccomanno this month’s featured author. Like what we did for Volodine last month, we’re offering 30% all orders for Gesell Dome and 77 (use SACCOMANNO at checkout), and will be running a series of excerpts from his books. (Maybe even a preview of a future Saccomanno book . . . Or an interview with his translator, Andrea Labinger . . . Stay tuned to find out!)

Let’s kick things off with a quick overview of who Saccomanno is. In faux-interview form. 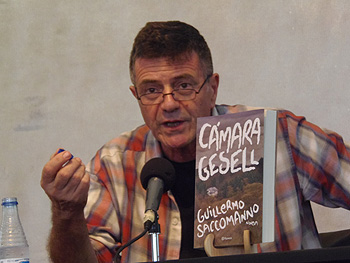 How did you come to find out about and publish Saccomanno?

We first found out about Saccomanno when Andrea Labinger was awarded a PEN/Heim Translation Fund Grant in 2014 for her translation of Gesell Dome. The sample that won her the grant was pretty . . . striking, right from the get go:

Tonight, hypocrite reader, my double, as you’re about to start reading this book, novel, stories, chronicles, or whatever you prefer to call these bits of prose, pieces of nothing, on this freezing night, with the sea so close and so alien, right here in this Villa, May, June, July, August, September, what difference does it make, in any of the off-season months, here, in his chalet in Pinar del Norte, a center-left surveyor is fucking his kid, someone, a mechanic, in a tin-roofed house in La Virgencita, is beating his girlfriend, someone, a drunken laborer in a vacant lot, tries to break another drunken laborer’s neck during a game of truco, someone at the Terminal, a night watchman in canvas espadrilles, after the last bus has gone, drinks mate, the steak of the poor, someone, an AIDS victim, hangs himself in a shanty in the south, someone, a foreman at the cement plant, is burying his girlfriend’s body at a construction site, someone, a young officer, is applying an electric cattle prod to a juvie thug at the police station, someone, a loser wrapped in cardboard, dies of cold in the doorway of a building near the docks [. . .]

And it goes on and on like that for probably a couple-dozen more awful crimes. 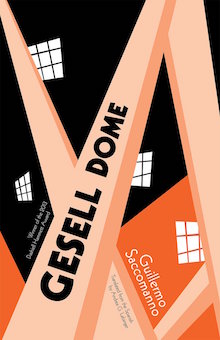 Is that when you made an offer?

Well, it doesn’t exactly work like that . . . We were intrigued, but given the length of this book (616 pages!), we needed a bit more information about what it was like as a whole. Thankfully, Andrea had a proposal that provided a really solid overview of this mosaic novel about Villa Gesell, a resort town with a Nazi past. Gesell Dome takes place in the off-season, when the town’s remaining residents struggle to make it through to the next tourist season. How do they pass the time? Murder, for one. Adulterous affairs as well. Other acts of violence. Other crimes. And in the background, four wealthy men pull all the strings, taking advantage of everyone they can for personal gain.

Paraphrasing P.T. Smith, it’s a book of horrible endings and crimes that go unsolved because no one even bothers.

What’s also really cool—and which Andrea brought to light—is how the novel builds itself. Similar to John Dos Passos’s U.S.A. Trilogy, it employs a mosaic structure, with stories constantly being interrupted by advertisements or other stories, only to pick up a few pages later, building and building in a sort of symphonic whirlwind of thwarted ambition and desperate acts.

Aside from the horrifically violent plot and interesting structure, were there other factors that drew you to Saccomanno’s work?

There is the fact that he received the Dashiell Hammett Prize, awarded by the International Association of Crime Writers, on two occasions: for Gesell Dome and for 77.

Nice. Are there any other interesting stories about this book?

Actually, yes. There’s a character in the book who is a writer, the one journalist in Villa Gesell, who is more or less our moral bearing as we read. At one point, his house is burglarized and the computer with his manuscript is stolen. Supposedly, that’s based on a real-life event because, yes, Saccomanno lives in this very town.

Really? The local Chamber of Commerce must love him for writing this book? 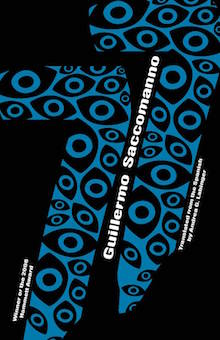 It comes out later this month, right?

Yep. On February 12th. I have great expectations for this book. Everyone who took the time to read Gesell Dome (a book that takes both a lot of time and a strong stomach for all the violence, which, to be fair, is offset by moments of humor, but still, a strong fortitude is required), really loved it. (Jeremy Kitchen from the Chicago Public Library and Eye 94 radio claimed that it was “better than any Bolaño” and was willing to fight about it.) 77 has some of the same elements, although it’s a much more focused, digestible book.

It’s about Gómez, a gay high-school teacher trying to make it by during the Videla dictatorship in Argentina, when there were lots of disappearances. The novel is mostly a flashback to 1977, as Gómez reflects on what he had to do in order to survive—a sort of “silent complicity” that still haunts him thirty years later. It’s a very plot-driven noir that is very much of the time laying out just how bad things can get if we don’t stand up to fascists. You can’t just bury your head in the sand and wait for things to get better, because they might not.

Are there other Saccomanno’s lined up for the future?

Not exactly. We are planning on doing more of his books, but without anything under contract, I don’t want to say more at this time. But it’s quite possible this will be unveiled during this Month of Saccomanno.

Very. But in the meantime, everyone should get copies of 77 and Gesell Dome. And remember, if you use the code SACCOMANNO at checkout, you can get 30% off both of these. And stay tuned for longer excerpts from both, and possibly some other fun things.

3 responses to “Guillermo Saccomanno [Open Letter Author of the Month]”