Before starting this month’s focus on Quebec literature, I asked P.T. Smith to recommend a few books for me to read, since he’s one of the few Americans I know who has read a lot of Quebec literature. But rather than hoard these recommendations or write silly things about this, we decided it would be best if P.T. wrote a weekly post throughout February covering some of his favorite works of Quebec literature ever. First up is a book that’s beloved by Norm Macdonald.

A few weeks ago, Chad asked me for four books to read for his month of Quebec literature. I over-thought it, as I do. Do I go with ones I love most? Older books or recent releases? Do I make sure to have a variety of publishers, of both the original French and the translation? Am I balancing the gender of the author and the translators? Am I using these rhetorical questions as a delaying tactic to begin actually writing? Yes. They were real questions though, and in the end I threw them all out by coming up with a simple structure: three books that are classics in Quebec but which are criminally unknown in the U.S. (and ignored in English Canada, but I’m not here to go on about the Two Solitudes), plus the thing I’d read most recently. I gave the list to Chad, he seemed happy . . . then weeks later he came back to me saying he’s got too much to read and can I write about them myself. So, here I am, continuing this pretense that I’m some half-expert on Quebecois literature, despite having no French, but hey, I live near Quebec and sometimes I go there and sit at a dinner table with friends patiently waiting for the next time they switch to English for my benefit. 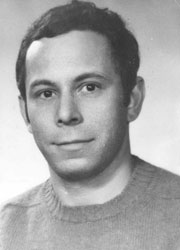 Let’s start with a book by the god of Quebec lit, Réjean Ducharme. He’s hard to come by in English now, with books not yet translated, books out of print, books in need of a new translation, but Talonbooks has two translations by Will Browning, Miss Take and Go Figure. Of the two, I probably prefer Go Figure. The dumbest thing I could say about Ducharme, and so the thing that would probably help sell some books, is that he’s like the French-Canadian cross of James Joyce and J. D. Salinger. It’s hyperbolic nonsense that in the end doesn’t really hold, like most comparisons of the kind, but also like those comparisons, there’s truth in it. Ducharme was a genius with wordplay, with puns, with language slipping all over the place, not quite meaning what you’d think, not quite holding but always moving forward towards something new. The narrator of Go Figure, Rémi, is halfway brilliantly in control of his language, and halfway someone just barely following the madness of their distractions and obsessions. 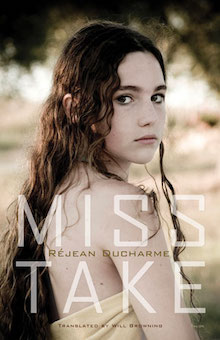 The easy, obvious part of the Salinger comparison is that Ducharme eschewed celebrity, was a “recluse,” and had stopped publishing fiction well before his death in August of 2017. But it cuts deeper than that. Children, the wildness of children, features prominently in both Go Figure and Miss Take. There is something like innocence in their behavior, but not in a way that suggests purity or goodness. Instead it is fierce, untamed pursuit of life that society does not approve of, a clash that leads to pain, torment. There is no idealization of the children not yet tamed by the world, but Ducharme is indeed on their side. As Rémi says of his child friend at one point: “With that, she left, completely disgusted by a preaching moralizer who was despoiling her.”

Have I preambled enough? Should I actually write about Go Figure now? Before I start my look into Go Figure, if you prefer someone who knows much more than I do, look to Dimitri Nasrallah’s article in The Walrus.

I’m trying to follow in Chad’s style a little here. This isn’t a review, it’s scattered thoughts about a book I haven’t finish rereading, and I’m probably going to start drinking at some point while writing this. Or maybe while editing, whichever. It’s all okay though, so long as I convince a couple of you to get this book. Or convince enough of you to clamor for Ducharme so much that some publisher gets him back in print, gets new translations out in the world. Okay, done hesitating. 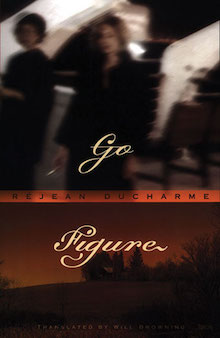 Go Figure has a plot: a young couple, Rémi and Mammy, are utterly broken by the miscarriage of twin daughters. Isolated from each other, Mammy goes to travel Europe with a beautiful seductress while Rémi renovates a mess of a home in rural Quebec. There’s a community around him, many women, some men, and of course, a child. Fannie is Rémi’s closest companion, a replacement for his dead daughters and for his wife. Rémi narrates his relationships with his new friends, their parties together, their struggles and their pleasures. He is isolated, deeply, deeply alone, but also already intimately connected with the people in the village, because that is life, right? Isolation and connection both utterly inescapable. He details the work he’s doing on his house, his successes and failures as a guy from Montreal trying to make it in the country. (Of the local hardware dealer: “he has a knack for deflating the swelled-headed fugitives from Montreal.”) But most of all, he speaks to Mammy and to her companion. He longs for them. He doesn’t know how to be live with out without them, or with their adventure abroad, but he will.

So that’s the plot. But good luck finding it. Rémi isn’t narrating for the reader, he’s speaking to and for himself, chasing his language and his thoughts and god knows where they’ll take him at any moment. Go Figure is, yes, a difficult book. Straightforward things get caught up in the language, in the twists of Rémi’s mind so that you lose track of what is happening, who he’s on about at the moment, who is doing what, and you only have the twisting path of language to follow. Rémi himself knows this: “I don’t know what I’m saying anymore. I’ve lost the thread. Even the fabric of speech no longer holds water, no longer sustains us.”

And yet . . . this isn’t all language game, isn’t a fall towards nonsense: it’s the way this hurt man’s mind functions, how it expresses his life. Ducharme is a master of style, but his writing is deeply, deeply emotional, his characters are complex humans trying to make it in a world that doesn’t root for anyone: “As cannibals go, we are quite peculiar: we only eat the ones we love and only their very best, and when we’re done, we dab our lips with a handkerchief.”

Go Figure is funny, too. In all sorts of ways. Sometimes it’s silly, quick: “a caper designed to lead Fannie into temptation, but deliver her from ladders.” The jokes are compulsive, and a challenge to translate (some of them I have no idea how Browning did it, would love to know how creative he got), barely holding to sense: “I didn’t wait to be asked twice, I perched her on my shoulders, and I have no idea what impression she gave me yet again—whether I was happy to have her, or unpappy she wasn’t mine.” Unhappy, unpappy, it’s silly, it’s funny, but goddamn if it isn’t heartbreaking too, coming from this man who lost two daughters. Are these slips even under Rémi’s control? “I’ve metaphorically put all our eggs in one casket.”

For me, beyond the insane intelligence of this book and of Browning’s translation, beyond the raw beating heart, the almost miraculous stretches of compassion towards each and every character, beyond the joy in the possibilities of language, what I love most is that it’s filthy as fuck. Rémi is obsessed with the sexual. The sexual is inescapable, it’s in every character, including the children (child are wild beings, remember?). Sex is everywhere, in conversations, in touches, in Rémi’s thoughts, in other’s thoughts, in movement, and of course, in language. I live for filthy lines, for filthy jokes, so here: “What’s the use of all that, apart from tiptoeing through the twolips.” 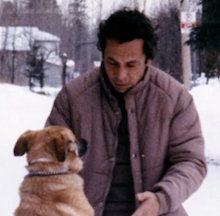 It’s a line of dialogue thrown out between Rémi and one of the locals, a woman. The whole passage is a perfect example of how this book goes. It’s part description of them working on the house, part weird exchange. I could quote the whole thing, but I’d rather end on a passage showing the beauty Ducharme is capable of. Most of the time, the book is a prayer towards Mammy, towards woman Rémi loves more than anything, obsesses over, but who is a distant as a loved one can be. That’s where most of the pain and beauty resides. (For it always comes back to you, you who are my law, who hold the mirror, from the side that is betrayed, from the other side of the gulf widened by every betrayal.) But the presence of Fannie, that child who is friend, source of joy, source of pain, stand in for lost children and lost wife, is a close second. Regarding Fannie:

She was sent to get me, and it’s urgent. She takes me by the hand. I let myself be led. How can you resist—her fingers are so slim, so delicate; it’s beyond human. We’re taken by grace and put back in our place, in the inferior realm to which we ascend while growing up. We’re nothing but organs and infections, she’s nothing but art. We moan and groan, she’s lost in reverie. We have eateries, sculleries, histories, breweries, Tuileries, therapies to treat ourselves, therapists to hold us hostage and demand higher ransom. She has nothing, she is all she has.

So that’s Go Figure, the way I see it after reading it years ago and rereading the first seventy-five pages.

I don’t know folks. Read Ducharme. Read Go Figure, then read Miss Take. Look for them in used bookstores, buy them online, whatever. He’s a master. I want you to read him. Quebecers want you to. Norm fuckin’ Macdonald wants you to, seriously. I made those comparisons cause that’s what we do in this lit world . . . but the man stands alone. This isn’t just some of the best literature from a small province of Canada, but some of the best you can find anywhere.

PS: I want to end all of these with additional recommendations, connected somehow to the book I’m focused on. Two contemporary story collections, Raymond Bock’s Atavisms and Samuel Archibald’s Arvida, translated by Pablo Strauss and Donald Winkler, respectively, contain stories that call to mind Go Figure. They’re vastly different in most ways, but still, Archibald’s “House Bound” and Bock’s “The Worm” and “The Call” all contain the seed that is a man, a little broken, moving into a home, working on the home, with some fractured relationship with his wife. Ducharme is under-read, but he’s not forgotten.

One response to ““Go Figure” by Réjean Ducharme [Quebec Literature from P.T.]”