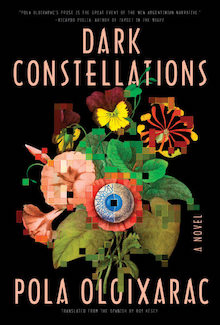 Dark Constellations, the second novel in translation by the author of Savage Theories, continues the intriguing, complex narratives of science, technology, and searches for meaning and control in the personal and economic/political. Both novels jump around in time. Each epoch pushes boundaries of connectedness between the human and non-human, sometimes mystical, other times exploitive and weirdly, humorously absurd. Readers of Oloixarac’s novels seem to struggle with how to decide where to shelve these books: there are certainly elements of cyber-punk and science fiction. There is some Venn Diagram of relatedness in which a wider range of genres fits: Richard Power’s Plowing the Dark, DeLillo’s White Noise, Sorokin’s Ice; Bulgakov’s phantasmagoria and Nicola Barker’s disrupted narratives; Monty Python when the humor is biting, horrifying; and Andrea Barrett’s historical scientific concerns. And yet, we are not dealing with magical realism. Oloixarac is part of a grander movement of new Latinx writers, which includes the likes of El Salvadorian Castellano Moya of Dances with Snakes and Samanta Schweblin with Mouthful of Birds. Oloixarac’s writing is one of many styles of the new, but all these novels consist of ideas grounded in particulars, which is ultimately missing from so many dreary, derivative fictions of USA/British writers of manners and social convention.

Oloixarac’s writing is original, with unique preoccupations. Dark Constellations starts in the nineteenth century as European scientists seek an orchid’s pollen in the Canary Islands that is reported to break down barriers of human consciousness between people, but also human and non-human. Traveling into a cave system, scientists such as cartographer Torben Schats and insect merchant (?!) Diotimus Redbach find themselves overwhelmed by the hidden city of an indigenous tribe. They appear again later, but then we move on to Cassius, an student from Argentina studying computer coding and who later works at Stromatoliton, a company that seems to have a stake in the private, the public, the international, the dark web, and a future that breaks down divisions of species, people, corporations, and countries.

At the conclusion of his translation of Savage Theories, Roy Kesey writes a short afterword with observations on Oloixarac’s writing. He notes a sense of displacement, and already looks toward Dark Constellations, which joins the first “as every bit as rich and enfoldingly complex.” This is true on several levels of narrative structure and continuation of images and themes of which the keen reader might want to keep track. On a basic level of sentences (and the challenges the Spanish might have created for a translator), consider this concluding paragraph for one of the final chapters:

Ailín laid her head to rest next to the computer. Suddenly, Ailín and Noelia and Leni ceased to exist, and Cassio took up his lambskin jacket and patted Mossad, who meowed like a hoarse mockingbird. Cassio waved a liminal goodbye and was jettisoned out of the house. Violet glimmerings descended from the peak of the sky, covering everything, sliding down the side of the frozen mountain. Suddenly, his own trajectory painted itself sharply against the world.

A whole lot is going on just in those few sentences: acting and being acted on, unstable reality at least in perception, species confabulation, sky and earth features, allusion to the secretive political (Mossad) reduced to non-meaning, transcendence, specificity. If asked, could you demonstrate the act of “a liminal goodbye?”

We are in the near future. The women named in the above passage are the new “resistance,” literally painted as superficial as they try to disguise their faces from being scanned by public cameras, painting them with black and white triangle shapes. Cassio, who has been nurturing virus codes, has planted them throughout the world-wide web, one of the several trans-historical, trans-national, trans-personal constellations of the book’s title. The government and Cassio’s company have figured ways to capture the DNA of each person first via live samples, then exhumed corpses, and finally with monitors similar to public security cameras—Bionoses—which hoover up airborne DNA molecules from the general public. The revolutionary impulse of the population post-Argentinian dictatorship has devolved into the wearied but predictable co-opting of such projects—in which the government and corporations use scientific means for threatening but unclear gain.

I don’t think it is a spoiler to urge the reader to keep with the novel in order to reach a phantasmagoric, wonderfully absurd moment later on: a swarm of rats in a five-year cycle, triggered by the blooming of a specific plant that covers them in a neon-green dust. As the rats later die they first form copies of star constellations. According to one character, we can discern the really real by not looking at the stars/constellations, but at the black voids, the dark, titular constellations where there is no light. Head-scratching, profound sounding, a strung-together set of metaphors that might echo theoretical physics, nihilism, sure sounds like scientific deep thought or one of the earliest human attempts to figure out cause and effect: as above, so below, and vice versa. But these are the musings of a fellow looking at Day-Glo rats being exterminated while mysteriously forming constellation patterns, all brought about by an ability of humans to reach across the species barrier. A deep parallel exists between this descent down to the animalistic as Cassio reveals the technological nodes of the computer virus he has spent a lifetime surreptitiously disseminating, one that no one could debug or contain due to its complexity and reach.

Oloixarac has an inventiveness, an imagination that stands apart from all those other (mostly male) writers I referenced at the start. She has control over images and ideas, which makes for little to no waste of words building up this world and its story. I don’t intend all of this to sound so dry, deadly serious. The writing has wit, playfulness, as Kesey also points out the “satiric key” that a reader needs keep in mind while tracking the jumps of time and place. We can look forward to more from this author, and one hopes the same translator, as Oloixarac’s third novel, Mona, has been recently published in Spanish.