Carlos Labbé [Author of the Month]

In celebration of the release of Carlos Labbé’s Spiritual Choreographies later this month–and because of a little surprise we’ll unveil soon enough–we decided to make Carlos our “Author of the Month.” From now until June 1st, you can use the code LABBE at checkout to get 30% off any and all of his books. (Including ePub versions. And preorders.)

Over the next few weeks, we’ll run excerpts from his novels, highlight a forthcoming interview between Labbé and his translator Will Vanderhyden, and share some of Carlos’s music.

But for today, to kick this off, I want to do something a bit unusual and rerun a post from a couple years ago about Loquela. 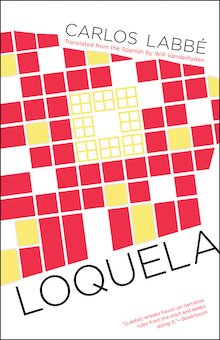 Loquela Is the Book You Should Be Reading

This is another one of those posts. One in which I wrote a long-ass essay/diatribe that I decided to delete so as to “focus on the positive.”

In this case, I was on a roll about how sick I am of the literary field anointing four-five international authors a year and writing endless articles/listicles about them at the expense of all other books. About how the field has become a bunch of yeasayers who would rather join a chorus of “this book is the best!” instead of reading adventurously and actually finding out about books that haven’t been ordained in this way. About how reviewers don’t seem to take many risks anymore, and would rather pander, cheerleading style, for more retweets and favorites. People don’t seem as curious anymore, as willing to go out and find their own little books to champion. Maybe it’s because social media has ramped up our social anxieties to an insane degree, but it feels like people just want to be nice and safe and all in accord. Dissent is death on Twitter.

Fuck all of that. And fuck me for wasting twenty minutes trying to flesh out the argument . . . Instead, I’ll tell you about one of those books that adventurous, non-conforming readers would absolutely love: Loquela by Carlos Labbé, translated from the Spanish by Will Vanderhyden.

I just reread this book in preparation for a conversation with him at Wild Detectives in Dallas, and was re-wowed by the multilayered linguistic world that he creates in his novels. This is a book that owes a lot to Juan Carlos Onetti’s work (especially A Brief Life) as well as to Julio Cortázar and other Latin American works that are set in universities. I’m not going to lie: It’s a complicated book, with multiple narrators, events that recur in new contexts providing the book with a certain instability (or, reversing that statement, granting it with a certain remix texture transforming scenes into motifs that Labbé picks up and plays with in increasingly interesting ways), novels within dreams within novels. It’s a book about how art is created and how it is transformative, and there’s basically nothing like it that’s being written today.

Rather than do a “normal” sort of reading and conversation—with Carlos reading for 10 minutes, then answering some general questions—we tried to create a way to introduce everyone to the text by asking questions, then, at three different occasions, reading separate bits from the book. I can’t reproduce that here, but I do think that it was a really great introduction to how to approach the book and that everyone who attended will enjoy the novel that much more, and have a new appreciation for it. Which is maybe what literary events should be?

We started by talking about the first main thread of the book, the sections entitled “The Novel,” which occurs every other chapter and are always in italics. This thread is about “Carlos,” a young writer trying to write a detective novel about an albino girl who is being stalked and hires a detective to try and protect her. That doesn’t end well though . . . From the very first paragraph of Loquela:

Carlos looked at his notebook and reread the last page: anticipating that the killer—whoever it was—would defend himself, the man had retrieved the gun. His head pounded and his knees were shaking. There’s a dead girl lying inside, he thought. He’d never fired a gun. His vision clouded over, his whole body pulsed as the door opened slowly from inside. He decided to fire first. And he did. The albino girl let out a soft cry and fell at his feet. He was the killer.

The bulk of “The Novel” sections are about Carlos trying to make this manuscript work. He talks about it with Elisa, he tries to figure out the plot holes, he rewrites certain events (like when the car tries to run over the albino girl), and he receives a letter from Violeta Drago (more on her in a bit).

In writing the novel, Labbé (to distinguish him from the fictional Carlos) wanted to include some of the thoughts and ideas that went into writing such a novel, which led to the second set of sections: “The Recipient.” These sections take the form of a diary in which a student writes about the novel he’s writing about Carlos. This is some At Swim-Two-Birds shit right there. These bits are more theoretical, touching upon the way ideas and books (like Onetti’s A Brief Life) influence your way of structuring events and writing about them. Here’s an abridged excerpt from one of these parts.

I’ve been imagining a detective story. It occurred to me that I could write a novel of innumerable pages about a girl who, frightened because a man is apparently following her, contacts a detective to help her. She and the detective become friends, they flirt. He ends up obsessed with her and follows her everywhere. I want to sit down every afternoon, take advantage of the dead hours of summer to write. On one of those afternoons the inspiration comes to me. [. . .] That story of the girl who gets stalked by the same guy she is paying to protect her has been coming back to me every since my cousin told it at our uncle and aunt’s country house last Sunday. [. . .] That Sunday my cousin Alicia and I talked almost all afternoon. I told her I wanted to live alone that next year and she invited me to come check out her home-studio on Calle Bustamente, she could rent me a room there. And that’s where I’m writing this now. She also told me about her friend Violeta. Bored of living in the cesspool of Santiago (my cousin’s words), she moved to another city—I can’t remember which one—for a couple of years. She met a guy there, a classmate at the university, with whom she went out and then broke up. The guy was unhinged and wouldn’t leave her alone, calling her on the phone every night, following her through the streets, buzzing the intercom at her apartment and not saying anything when she answered. One day, desperate, it occurred to her to ask a professor friend from the university for help, and he managed to get the guy expelled, but that was worse: one time the guy, furious, almost hit her with his car, and another time he almost pushed her into the city’s river. She loved where she was living, but in the end Violeta had to go back to Santiago. What she doesn’t know is if the guy followed her here or if she just had the terrible luck of encountering another psychopath. Alicia was very worried when she told me this, her friend is receiving letters that are making her paranoid, lately she thinks she sees that guy on every corner. There aren’t many girls like Violeta, according to Alicia, and that’s why men go crazy for her. This is a story I’d love to be able to write.

What comes next is the moment in which my childhood multiplies into details I’d love to recount and cannot. Most of them were lost the instant we played together, the rest are still there, in Neutria, and you can see them for yourself. Sometimes Neutria was the land of semi-divine emperors, of infinite cruelty or kindness, whose slothful and obese courtiers, in contrast, engaged in decadent melodramas. Other times it was a simple village where farmers, shepherds, and foreigners traded honey, cheese, bread, or fruit for a song or an entertaining story. Or it was the nexus of activity for stylized spies, convertibles, casinos, firearms, hotels, highways, and femme fatales. And in the middle of all those adult faces appears a boyish one, yours, insistently inquiring what it is that we’re playing, and coldly I reply that we’re playing the city of Neutria, not expecting you to make fun of us: you talk to yourself—my mother says people who talk to themselves are lunatics. Alicia gets up, says again that it isn’t make-believe, that Neutria exists; it’s a beautiful place, incredible, we travel there on long weekends with our parents. It’s so much fun that we like to recall everything that happened there. That’s what we’re doing, remembering all the wondrous things, not inventing them.

2) At the university, she’s involved with a professor who promotes “Corporalism,” a set of literary beliefs that are intentionally hazy, but generally involve doing extreme things with your body while a writer observes and writes your flesh into the text, and also involves some quasi-Barthesian rhetoric. From the “Corporalization Manifesto”:

The reader lives and the author has died, we’ll proclaim, though our goal will be to resuscitate him, to give him what he never had: body, flesh, presence. And what will die instead is the text, the artistic product that escapes from our hands and becomes merchandise: all the time we spent spilling our blood across the page is transformed into food for publishers, newspapers, critics. That’s why we’re anemic, that’s why we need to suck up the humors of others and end up dissolved in foreign books, that’s why we die every time we read, in handwriting that is not our own, a sentence that belongs to us.

So there’s that. The last part of Loquela starts to revolve around this group, their actions and beliefs, reflecting back on everything that came before. Like I said before, this is layered. It’s a book in which there are “rabbit hole moments,” when the spiral of narrative levels is simply dazzling. And there’s this thing that happens towards the end, where there’s basically a series of beginnings, a sort of loop of possible events. For me, it starts to read like the best of electronic music. (Or anything by Mark McGuire.)) Ideas and threads resurfacing in new contexts, textures that you can lose yourself in, spaces that seem utterly alien and exciting. (Not surprising that Labbé is a musician.)

For a book that opens with an ending, I guess it makes sense for me to wrap this up by going back to the title, Loquela. It’s a strange, slippery word first used by Ignatius de Loyola way back in the middle ages, and then adopted by Roland Barthes:

Loquela is a word that designates the flux of language through which the subject tirelessly rehashes the effects of a wound or the consequences of an action: an emphatic form of the lover’s discourse.

And that’s really what Loquela is: the flux of language around death and love. It’s a book I hope you buy and that I hope we can talk about. I don’t get it, but the experience of rereading it—in which every paragraph reframed the whole book, convinced me it was about something else—was exhilarating. It may never get it’s own hashtag trend, or be a best-seller, but great literature never really does.

Tags: author of the month, carlos labbé, loquela, will vanderhyden