As mentioned last week, in celebration of the imminent release of Carlos Labbé’s Spiritual Choreographies, we decided to make Carlos our “Author of the Month.” From now until June 1st, you can use the code LABBE at checkout to get 30% off any and all of his books. (Including ePub versions. And preorders.)

And to try and entice you to buy the book, here are the first two chapters. (And yes, the second chapter is 13.) 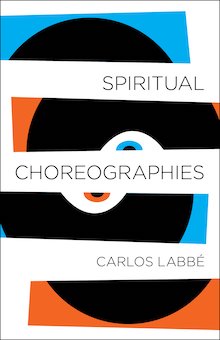 The choreography needs someone to witness its movements.

He played the harmonica with his nose, pulled out his handkerchief and blew until all the pollution of the capital was expelled from his lungs in one transparent color. He finger-tapped his f lat chest like a kultrun, gargling to imitate a harp.

He thought he’d be able to escape to his tree when he could not longer bear the smog of the city.

I, on the other hand, now that I have no nostrils with which to inhale or exhale, want a melody of bows and strings and stones to still be raining down from all five fingers, onto this skin, stretched across this orthopedic wheelchair, when the sun rises.

On the table, in the sunlight, there should’ve been some kind of animal, not this screen where each movement of my pupil writes a soundless name.

The choreography needs audience, needs someone to witness its movements. The damp twilight wind slammed shut the kitchen window. She was cutting leeks at the sink when the sash colliding with the frame startled her; the shards of glass turned to fragments on the floor a few meters away. The shock made her jerk the knife across the back of her left hand. When the boy entered dressed in pajamas, hair mussed—mother, what was that? his question—she was standing there, staring at the shape of that small wound under the stream of water, as if it reminded her of some profound, lost thing. One sound, two, a counterpoint, the dark night looking out at waves, she thought. And then there was just her blood, staining the water in the sink. She brought her hand to her mouth so she wouldn’t ruin the vegetable with her foul taste.

“Go shower, we’re eating soon. And bring him down,” she told the boy.

Ten minutes later they were all sitting in silence around the kitchen table. She had to quicken her breathing and open her eyes: the little wound on her hand kept her from concentrating, pulsing in the dark, like the double of another wound on the palm of the hand of a man who in her memory recoiled from a seashell, from a broken bottle, tears and sweat; she was naked, on the wave-packed sand, wet. I was another person back then, she thought.

“Life here begins many times,” the vocalist blurted out unexpectedly from his wheelchair.

He did so without solemnity, but with a voice not his own.

It was a little unsettling, according to the doctors, his neurological damage rendered speech impossible, but that was the third time in a year he’d spoken during meditation. For an instant, the boy opened his eyes too; he and his mother exchanged a glance just as a draft swept in through the broken window and caused a distant door—the bathroom door, she guessed—to slam. Then they heard the beep, beep, beep of the alarm being deactivated at the front entrance. It was the other, returning from the recording studio. He came in carrying a paper bag, set it down in the middle of the table, and went into the kitchen. Reaching out her fingers, she removed a still-warm roll from the bag and tore it open, scanning with her eyes, in vain, for the jam. The other shut the refrigerator with his foot, sat down; he grabbed the jar of jam and set it beside her plate—she gave him a grateful smile—and turned to the vocalist, offering him a sip of the beer he held in his hand.

Then the other raised the can and made a toast:

“Bless Him. I finished writing the bloody score today.”

The boy pinched an unlit cigarette between his lips as he applauded. The movement of his hands knocked over the milk carton, which, striking the floor, bounced back up and collided with the jar of jam. Suddenly irritated, she couldn’t take her eyes off the can of beer as she attempted to clean the floor with a spoon. The other brought his hands together and bent down beside her.

“The Man wanted to tell me something last night, I’m sure of it,” the boy blurted out.

The vocalist tried to grimace through his paralysis.

“Was the show any good?” she asked.

“It’s been proven: The Man is the greatest baritone in the history of humanity, Mother. His shows are always perfect.”

“That’s why he’s in the bubblegum music.”

The other burst out laughing at his own comment. She, all the while, watched her son speak, but couldn’t understand what he was saying. Were they speaking in Chezungun again to mess with her, to exclude her? All she heard was laughter and—it’s absurd, she said to herself, we’re miles from the ocean—the sound of waves breaking on the beach, swelling with wind and rain. Another spark in her memory: the beach’s thick sand clinging to her thighs as she spread her legs, the other’s alcoholic stench on the nape of her neck, his moan in the dark: leave us alone.

“I pushed through the crowd right up to the front, seriously. And there I am, transfixed, face to face with The Man, modulating the final guitar solo with the vocoder implanted in one of his molars. Then he sees me, I’m sure of it. He sees me and wants to tell me something, something only he knows, something for my ears alone.”

“My dearest, dearest lad,” the other sighed under his breath. “Do not forget the stage’s bright lights are there to blind the performers just enough.”

She carried the plates and cups to the dishwasher as the volume of the conversation rose. According to the boy, the fact that The Man was the first clone to ever produce positive sales numbers for the record company proved nothing in terms of his musical refinement, nor did it provide any credible proof as to whether or not he was capable of feeling emotions when he sang.

“Haven’t you ever seen a stranger’s face pass quickly by a window, the face of a stranger to whom you must impart some important thing, a face that never comes entirely into focus, but that you just have to speak to? I swear that’s what happened to The Man when he saw me.”

She decided to leave them to their discussion and take the vocalist in his wheelchair to their bedroom. She thought she might purchase a Quyasullu film for the four of them to watch while they ate dessert. She helped prop him up in the bed, brought a few pillows in from the living room to support his back. When she gave him the remote control, he gripped her hand, his eyes fixing on that little wound, already beginning to heal. She wanted to say, to ask him one, two, three times the same question about the words he’d babbled during meditation: if, after all these weeks correcting the book about The Band on his screen, he could use his voice again, if something had made him say what he’d said, and to what end. Then the wind blew, causing another draft to slam another door. A door somewhere in the apartment. The front door? she wondered.