“The Book of Collateral Damage” by Sinan Antoon 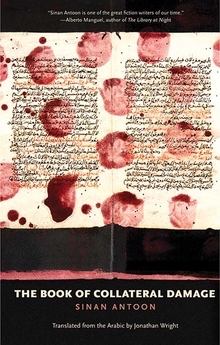 Author Sinan Antoon is an Assoc. Professor at the Gallatin School of Individual Study of NYU. His undergraduate degree was in 1990 from Baghdad University; his PhD is from Harvard, 2006, in Arab Studies. He came to the U.S. just after the 1991 war and has returned to Iraq several times for personal and professional reasons. He is a poet, translator, and novelist; The Book of Collateral Damage is his fourth book. The Corpse Washer, 2015, was also published by Yale Margellos.

An apt image for Antoon, or at least the narrators he brings to life would be a wax seal depicting a small globe with a person’s head peeking out above one pole, and feet out below the other, a literal depiction of a person passing through the world, with the one-word legend “Honesty.” A reader gets the sense that Antoon is a man travelling through this world based on life details he reveals in interviews, and his choices of stories, people—specifically narrators, language, and tone. That seal image may seem a bit light, but only on the surface: a person facing challenges, not quite belonging, at least at times. It’s a common theme from major world religions, Plato to Camus, contemporary science—being aliens and sojourners in this problematic, indifferent world. Antoon has written a twenty-first century update of the existential novel. Yet religions and philosophies also urge us to know the same world as a gift in terms of food, music, family, and friends. Antoon describes that goodness as well.

Belonging and struggle come with the impressions Antoon’s characters respectfully and non-judgmentally form of other people—taxi drivers, waiters, mentors, and professional peers, to women with whom the protagonist has romantic relationships. In this novel the narrator, Nameer Al-Baghdadi, keeps an interesting distance via observations of people, places, and events. He is present, he takes it all in, he processes, shows, cares: a slight, cool distance, of facticity, a flaneur not just of places, but an observer of life. However, instead of creating a sense of alienation, Antoon’s gift is to create a concreteness of the world portrayed. Toward the conclusion of the novel, Nameer recounts a scene after observing a man in NYC he has seen repeatedly going through bins for discarded cans and bottles to redeem for cash:

A month later, after wrestling with insomnia, I went out at half past four and walked south. After an hour, when I reached the riverbank, I saw from afar a truck parked under the Manhattan Bridge. There was a long line in front of it, with men and women pushing shopping carts piled up with bulging sacks. At the back of the truck a man was taking the sacks and then giving each person an amount of money. I watched for five minutes, then headed back.

While the account described here of the economically marginalized shows consequences of the contemporary urban world, the collateral damage of the title fully emerges in Baghdad, and in the writings of Wadood, which are at the heart of this novel.

Wadood Abdulkarim too is a man not wholly at home in any world. He is a bookseller whom Nameer encountered in Baghdad while serving as a translator for documentary filmmakers. Wadood gives Nameer an unfinished manuscript to perhaps translate; Wadood is ambivalent about this, the purpose of the writing not necessarily seeking publication. Wadood names his manuscript Firhis—catalogue. The writings of Wadood are in his voice, though not a book-within-a-book format, so no set-aside changes in font style or size beyond a chapter title and slightly indented margins. Wadood gives voice to his idiosyncratic vision, articulating the perspective of things of the world—a tree, a book, a wall, a rug, over 20 in all. Each of these sections is named “The Conversation of ______,” with the first one and a concluding version being a variation on the historical spiritual fable The Conversation of the Birds.

These testimonies recount the birth, formation, and growth of each thing of the world—sometimes we have to read a bit to figure out the small mystery of what is being brought forth, each with a history of decades. Each meets a final fate during the first minute of the fall of Baghdad in 2003. By the time we arrive at the concluding gut-punch of the fourth object, a carpet, the reader might feel put on notice that by understatement, showing not telling, this collateral damage will document the real costs to so much of what makes a culture, of the ordinary, which always bears the brunt of wars not of their choosing or control. Wadood explains this when handing Nameer the manuscript:

“This is a project of a lifetime, an archive of the losses from war and destruction. But not soldiers and equipment. The losses that are never mentioned or seen. Not just people. Animals and plants and inanimate things and anything that can be destroyed. Minute by minute. This is the file for the first minute.”

The voicing of inanimate objects as if they have human-like senses of sight and hearing, as well as the retention of memories, is a risky narrative device. A reader might initially experience that move as a bridge too far and absent in any previous familiar framework beyond fables, such as magical realism or a fictional argument for pansychism. A different purpose is served. The first aid in moving beyond this concern is the realization that Antoon has Nameer translating Wadood, and so creating a narrative container, context. Wadood’s Fihris comes with his explanatory writings, including a Preamble which includes:

The minute will be a three-dimensional space. It will be a place where I snipe at things and souls as they move. . . . But we rarely hear their voices, their whispers, because we don’t try. We rarely notice things smiling. Yes, things have faces too, but we don’t see them. Those who do see them, after making the effort and training to do so, and those who talk to them are labeled mad by your standards.

I am the one who saw everything, and I see what they don’t see.

Nameer then observes, “I liked the preamble, the idea of a history of the prey and a catalogue of the first minute. These were wild ideas that were not afraid to take risks.”

After a time the reader starts to wonder if and how Wadood and Nameer are also collateral damage. True to the smaller sections where the object or person emerges from unfolding detail, the novel itself concludes with the final puzzle piece of Wadood’s life, his mind shattering history and his fate. Nameer remarks that he is on his seventh move since coming to the U.S. Mariah, the woman with whom Nameer finds a mutual and significant relationship, traces the scars on his back. She does not ask too much about them, nor does she promise to erase them. As an African American woman she has her own deep understanding of history grounded specifically in the person, in belonging/not-belonging.

However, the collateral damages of history by the powerful do not dictate the entirety of existing as people out in the world. In one well-told scene, Nameer visits Mariah’s mother’s apartment for a meal. Antoon/Nameer appreciates food, home-cooking, or at least the unpretentious flavors of the everyday: figs, breakfast sammun with cream and date syrup, tea, simmet, okra recipes from two different cultures.

Antoon as a citizen of the world has definitive opinions regarding intellectual and political Orientalism. This critical engagement shows in his interviews, non-fiction writings, and a documentary he made about Iraq after the 2003 war. He critiques American invasions of Iraq and the politicians who ordered them, as well as the behind-the-scenes manipulation of foreign rulers, fickle and serving the perceived purposes of the U.S. We know that later, time and again, the support will boomerang back with unintended consequences for both governments and civilians.

Antoon’s fiction also comes as a rejoinder—my reading of him, not a stated concern of Antoon—to those who claim that something called “world-literature” gets initially written with an eye and ear for a theoretical (and mythical) mono-culture dominated by Western taste. The author in this novel cites poets and philosophers from pre-Islamic, pre-modern, and modern Arabic culture. A reader in English can take note in this novel of the authors named to seek out or not; the novel stands on its own regardless.

What is given no quarter, though, is the myopic Western assumption about the primacy of Western philosophy and arts cultures in the larger world. Whether from Asia, the Indian subcontinent, N Africa and other Arabic influenced regions: whole and different written worlds and perspectives, each with a rich, ongoing history are more ancient than, and stand beside, those of Western European traditions.

Sinan Antoon’s perspective and voice are one of the important, emergent witnesses. I’d claim that for the world stage. His books have been translated into French and German, and originally appeared in Arabic. He is building a truly important body of work.