As listeners to the Three Percent Podcast already know, last month I went on an editorial trip to Norway to meet with Norwegian publishers, agents, and authors, and to participate on a panel at the Lillehammer Book Festival. The panel ended up being a really enjoyable, wide-ranging discussion (which I will try and replicate on a bonus Three Percent episode later this month), but in preparation, I ran a ton of reports from the Translation Database to try and get a handle on general trends in Nordic literature in translation. (Which includes Norway, Sweden, Finland, Denmark, and Iceland.)

I never really had a chance to share my findings (which maybe are kind of somewhat interesting?), and since I feel obligated to NORLA for bringing me on such a fantastic trip–and not just for the amazing sauna experience on the opening night—I decided to make July “Norwegian Literature Month” on Three Percent. Starting Friday, our Jan Kjærstad books will be on sale as part of our “Author of the Month” program, I’ll be interviewing three different people for Three Percent, there will be weekly posts about a different group of Norwegian authors, and starting on the 25th, Monsterhuman by Kjersti Skomsvold will be the focus of the ninth season of the Two Month Review.

All that will be fun! (I think? I hope?) But for today, I wanted to provide a wider context by sharing a bunch of charts and nerdy shit to see if we can pick out any interesting trend lines. Next week I promise to bring the weird and the funny (the working title of next week’s post is “Norway’s Sad Dads: A Global Epidemic”), but before getting to that, I think it’s worthwhile seeing how Norwegian lit stacks up against the other Nordic countries, what’s being translated, by which presses, etc., etc.

Let’s start with the most basic: Which Nordic countries are getting their fiction and poetry translated into English?

Although there’s not a huge variance between the five countries, Sweden has been leading the way from the inception of the Translation Database right up to 2018. In terms of raw numbers of translations (of only fiction and poetry) between 2008 and 2018, here’s the breakdown:

That’s an average of 57 Nordic titles/year, which is pretty solid! Much higher than the Balkans and Baltic States and, I don’t know, Central America. This is doubly true if you’re into police procedurals/mysteries/thrillers, but I’ll leave that for later.

Two notes: That upward trajectory for Norwegian lit is really encouraging, especially given that they are the Guest of Honor at the Frankfurt Book Fair later this year. See that 2012 bump in Icelandic titles? That’s thanks in large part to being Guest of Honor (and AmazonCrossing). Given that natural bump that happens thanks to Frankfurt, I would bet heavily on Norwegian lit being the trendiest of the Nordic countries over the next few years. Well . . . maybe. I’m going to complicate that statement in a couple charts.

Second note! Iceland is WILD. I’m big on Icelandic literature, and have been for more than a decade. But the fact that they’re only 2 books behind Denmark? That seems insane. Iceland is so small!

So, because I’m a data nerd and feeling it tonight, I reran all these numbers, scaling them to the number of titles translated into English per 1,000 native speakers of the various languages. In other words, I tried to make this data a bit more standard so that we weren’t comparing a country with 320,000 native speakers (Iceland) against the 5 million Norwegian speakers. Because, obviously, there’s no way that Iceland can really compete with that on a book-by-translated book level.

Even more illuminating than expected! In this case, Iceland looks like such an outlier. That’s really wild and exactly why “Iceland Month on Three Percent” will happen in the not-too-distant future. (Unless Sweden invites me over there first? *WINK*) 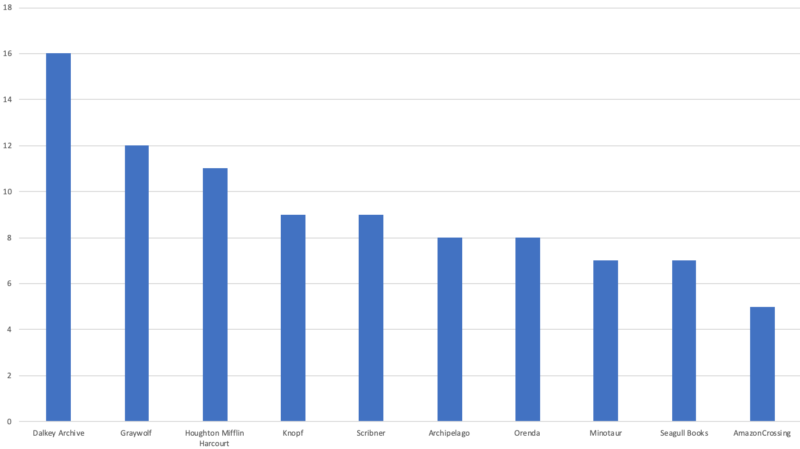 Oh shit. This is actually the most interesting chart that I was able to come up with. I took all of the Norwegian books and sorted them by publisher. Look at those top two: Dalkey Archive and Graywolf.

Long time listeners and readers know all about the Dalkey Problem, but for anyone new to this, let me recap in one simple set of statements: Dalkey Archive has been one of the most innovative, aesthetically pure presses of the past 50 years; Dalkey Archive has lost a lot of employees and never transitioned into a 2.0 version with a publisher different than the founder (both Graywolf and Coffee House have accomplished this); Dalkey Archive books can be hard to get and don’t have a ton of support among independent bookstores.

Which all fucking sucks.

Sorry for the blatant obscenity, but, seriously, there’s no Open Letter without Dalkey. And there’s no Deep Vellum (or Transit or New Vessel?) without Open Letter, which, without Dalkey isn’t . . . Dalkey is one of the few presses that is uncompromising in its aesthetic vision, something that I appreciate more and more as I both age and watch my colleagues use Twitter in hilariously embarrassing ways.

Independent presses start up each and every day. And a lot of them have vanished. Or been acquired. Or become something other than what they started as. (I want to write a post about how listicles have eliminated diversity among indie publishers as we all chase the same clicks, the same audiences, the same trends. Which bums me out. Have a fucking vision, kids, and believe in it.) Dalkey was always fringe, and despite all my issues—both private and public—with how it evolved over the past decade, I respect the impulse and commitment. Now more than ever.

That said, how many of the 16 Norwegian titles that Dalkey published have you read? Check that: How many are you aware of? Does anyone remember that Dalkey was the first to publish Jon Fosse more than decade before Fitzcarraldo? (I actually take some credit for this. It’s the petty side of myself, but I did Fosse and Alexievich and Énard first even if no one cares. Which is so shitty to focus on! But I am a shitty person! Recently, I heard other editors brag about their “misses” and thought, dude, I don’t even get credits for my hits so why don’t you fuck yourself, champ. I am not a good person. I know that.)

Anyway: Which of these books are “available” and which are read? We all know of Knausgaard and Nesbo and Petterson, and some of us know of Fossum and Fosse and Øyehaug and Jacobsen, and a couple people know of Sæterbakken and Kjærstad. (Follow along all month, and I will fill you in on all of these authors.) “Available” and being “part of book culture” are two separate things. And it’s quite possible that being “part of book culture” and “really great literature” don’t correlate. These are all issues for a much longer piece (aka, the book I’m going to work on in a couple weeks when I lock myself away in a light house [?!] with no WiFi [?!?!!?!?] to write about decision making, luck, and baseball. I doubt any of you will ever read this, but I need to get it out of my system), but for now let’s just move on to another graph: 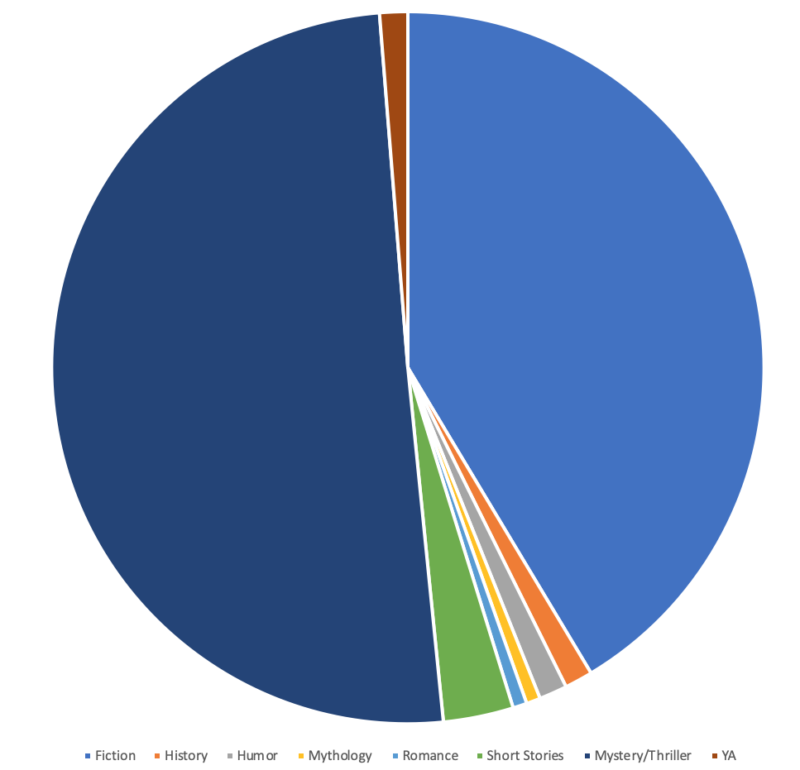 Well that was totally predictable. There are more mystery/thriller/police books translated from the Norwegian than all other categories combined. (Although my prediction was that mysteries would come in at 69% they only hit 51%. Which is still something.)

Spoiler Alert: It’s highly unlikely I’ll write much about these mystery/thrillers this month. I’m sitting in that light blue slice of the pie, reading my weird fiction (actually unusual, not Twitter “we want a brand!” sort of “weird”) and trying to figure out what makes books interesting and not just trendy. 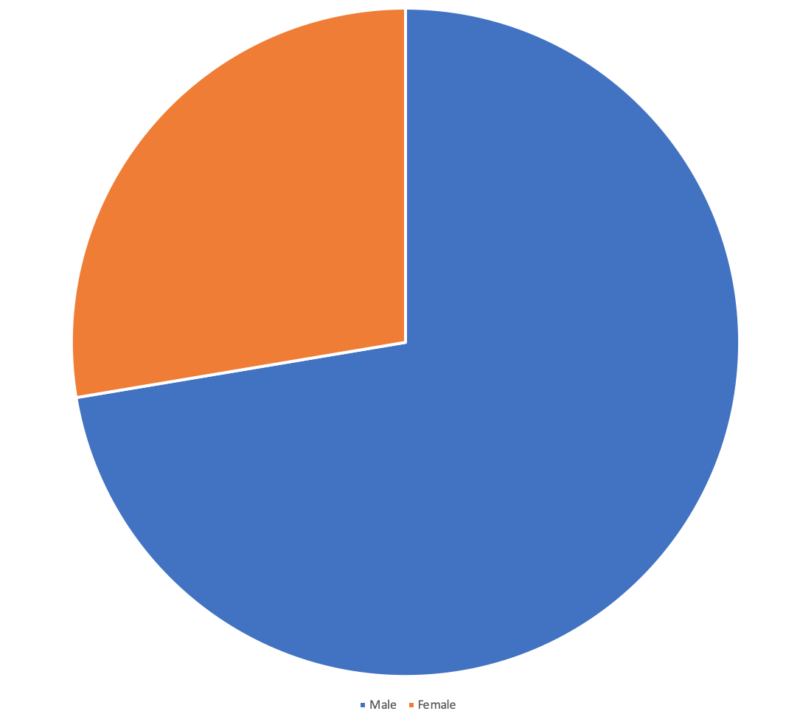 Last chart! I have no more unfinished thoughts to share, nor any subtle digs. This is bad. Of the Norwegian books that have been translated into English over the past eleven years, the vast majority were written by dudes. My half-thought out prediction at Lillehammer about the “future of Norwegian lit” was that it would be dominated by women writers; having looked into the statistics, I’m going to double-down on that.

We’re about to enter a five year period in which Norwegian literature is very trendy—especially when written by women. And when it’s unusual.  Goodbye, Knausgaard and Petterson. There are new voices that are going to resonate.

One response to “Nordic Literature In Translation: A Huge Data Dump”