Women in Translation by Publisher

Earlier this week I posted a few infographics about the breakdown of books (fiction + poetry) in translation by men vs. women from the sixteen countries that have produced the most new translated titles since 2008. Lots of qualifiers in there! To clarify: I took all countries with more than 100 books in translation in the Translation Database and looked at how many were by men, how many by women. The results? Not very good.

Those results are especially disconcerting if you assume that the countries whose authors are most frequently translated have a larger impact on the perception (and sales) of literature in translation. Which led me to wonder: Are the results any different if you take the publishers who do the most books in translation? Answer: Nope, not really.

Well, on the upside, AmazonCrossing has published more books by women than men (60.00%), but then things drop off rather quickly, with Other Press coming in at 39.36% and only four presses (those two plus Europa and Open Letter) above 30%. That far right side is bleak. Dalkey Archive, NYRB, FSG, Archipelago, Knopf, and Pushkin are all under 20% (Pushkin is 12.86%, which, ouch).

To make this easier to view in terms of raw numbers, here’s a graph of the number of titles by men and women from each of those fourteen presses.

Similar to France on the last set of charts, the gap for Dalkey looks insane. Although those little blue bars for NYRB, FSG, Archipelago, Knopf, and Pushkin aren’t much better.

And if you take all of these presses and add their books together? Only 31.45% of all their fiction and poetry in translation since 2008 has been written by women. (Almost identical to the 32.27% breakdown for titles from the most translated countries.) Visually, that looks like this: 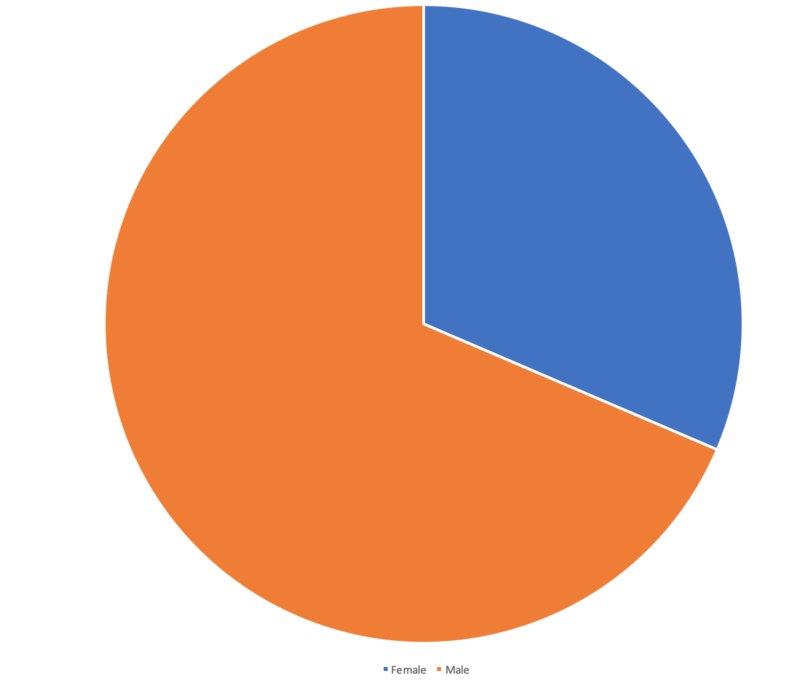 Given that, combined, these presses are doing approximately 164 titles a year, it would take over four years of publishing only books in translation by women to reach a 50-50 balance.

All of this is useful to know, if not a bit discouraging, but it also makes me wonder what impact Women in Translation Month has had on the industry as a whole. Come back next week for some analysis of pre-WITMonth versus post-WITMonth numbers. Should be interesting to see who’s tried to course-correct (and where those books are coming from).

Anyway, we’ll wrap this with a chart of the raw numbers. 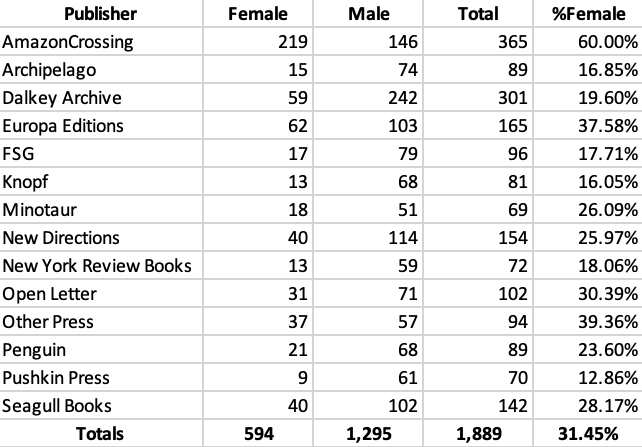 
Previous post
Three Percent #167: We Could All Do Better
Next post
“The Nocilla Trilogy” by Agustín Fernández Mallo