Now you’re really getting to preview our books . . . Although Cars on Fire by Mónica Ramón Ríos, translated from the Spanish by Robin Myers, is available for preorder from various online retailers, we don’t even have this book up on our website yet and, as of yesterday, on our website as well. We haven’t even presented it at sales conference. But it’s coming out on April 14, 2020 and is an incredible collection of stories that are bold, feminist, edgy, sometimes rather experimental in form and content, and very thought provoking.

Cars on Fire, Mónica Ramón Ríos’s electric, uncompromising English-language debut, unfolds through a series of female characters―the writer, the patient, the immigrant, the professor, the student―whose identities are messy and ever-shifting. A speechwriter is employed writing for would-be dictators, but plays in a rock band as a means of protest. A failed Marxist cuts off her own head as a final poetic act. With incredible formal range, from the linear to the more free-wheeling, the real to the fantastical to the dystopic, Rios offers striking, jarring glimpses into life as a woman and an immigrant. Set in New York City, New Jersey, and Chile’s La Zona Central, the stories in Cars on Fire offer powerful remembrances to those lost to violence, and ultimately make the case for the power of art, love, and feminine desire to subvert the oppressive forces―xenophobia, neoliberalism, social hierarchies within the academic world―that shape life in Chile and the United States.

Here’s one of the stories from the opening section of the collection. 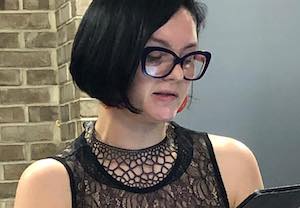 I move in slender fog
but I still wear
the features of my face
. . .
and I answer to my name
although I’m someone else by now.

Before the writer died, she’d held long meetings with her lawyers to discuss the possibility of being buried far from her country of origin with all the papers she’d written and never published.

One of the envelopes I’d found on her nightstand, even before I realized that the body in the bed was no longer breathing, contained the signed papers. My name was written in trembling letters on another, smaller envelope with the unmistakable green ink she used to draft her manuscripts. Inside it was a long letter dated two days before. It explained why she felt it would do no one any good to read her old notebooks. They’d only find her sorrows, her regrets—not because her life had been dissatisfying, but because her papers were crammed with experiences that had plagued her repeatedly in the form of dreams, night terrors, or when she forgot to take her pills—an empty medicine bottle on her nightstand—even when the people involved were long dead. No one could possibly benefit from reading a compendium of humanity’s most hideous features, which had pervaded the writer like fog.

As she once read in a mediocre book—her steady, uniform handwriting informed me that this was how she judged most of her contemporaries—the passing of time was supposed to imply that one had acquired a certain wisdom in focusing on pleasurable things—I could almost hear her say the words, her voice dense with sarcasm. Ever since she was a young woman, she had devoted her mind to resolving things that any reasonable person would dismiss as unimportant. But they reminded her that there was essentially nothing, deep down, to distinguish her from the gargoyles trapped in limbo between the St. Vitus Cathedral and the rest of Prague. Maybe this was only obvious to me because I’d spent so many years helping her with her work and her personal affairs, years in which my own writing was starved of attention, withered by the emotional paroxysms that periodically disfigured the writer’s face—the scratch on my left cheek smarted at the sight of her lifeless nails peeking out from under the sheets. It wasn’t that she’d killed anyone—with reference to the legal scandal that hounded Mario Vargas Llosa and Rubén Santos Babel—or that she’d destroyed young female writers who wrote like her—an allusion to the article she’d written under a critic’s pseudonym for several journals in her home country. What she meant is that she’d let her nightmares ruin every moment of her life, every relationship, every place she’d ever visited—her complaints filled interminable paragraphs. I skimmed them. She hated people, she mistrusted them, and perhaps, the writer mused, her sole raison d’être was to work out their basest inclinations, to fix a clinical eye on everyone who entered her field of vision. Where could this destructive instinct have originated, if she’d had an idyllic childhood and the world rose up sweetly to meet her? Even at a very young age—I remembered the time she’d shoved that academic out of an elevator—she couldn’t stand places where people congregate: museums, concerts, parties, gatherings, offices, conferences, readings, houses, living rooms, hallways, public restrooms, and assembly halls. She didn’t know how to behave among people she actually knew. She felt more comfortable as the eternal, ever-inaccessible foreigner. This was the source of her countless woes and afflictions, and it explained why she was always on the move.

I thought I heard a sigh leave her body as it lay prone. Out of habit, I got up to check on her. I looked at her face for the first time since I’d entered the room. Her eyes were half-open, her eyelashes metallic. Her skin had taken on the texture of drying wall sealant. Gum, I heard myself say, my voice a wispy thread.

I opened the windows to air out the medicinal smell that had thickened during her dragged-out death throes, real or imagined. I sat down in an armchair to watch the sun shifting along the rug until it reached the foot of the bed and illuminated a delicate curtain of dust spilling down from the books on the nightstand.

Sometime in her thirties, the writer had decided that the only way she could keep on living was to document her regrets in curt, precise, objective sentences. Attaining this literary distance from her own memories, the writer continued, her penmanship listing forward into dramatic peaks, was the only way she could forget. The bookshelves in her house soon filled with notebooks, and the notebooks filled with endlessly repetitive phrases. And so on for decades. The letter piqued my interest at last.

I daydreamed about where the notebooks might be. I knew she’d stashed some of them away in the walls, but what if there were more?

They were nothing but pages and pages of useless drivel—I sensed, in the letter, the writer’s desperation to dissuade me from the search, and I felt a rush of pleasure—that no one in their right mind would waste more than an instant thinking about. They overflowed with events that were of little interest to anyone, not even the writer herself, but would soon lodge themselves in her mind like inflection points with hundreds of possible interpretations. Later, much too late, the writer realized things she’d done, emotions she never knew she’d felt. As she stood in the kitchen, knife poised over the butter, or just before bed, or subsumed in a deep sleep, they’d reappear. Then she’d take out whatever notebook she was keeping at the time.

The sentences soon turned into verses. The verses into songs. The songs into elaborate precepts on the meaning of life that seeped into her work, the speech of her characters, her narrative style, her own voice. I could almost hear her declare “Tell me what it feels like to be alive,” the edict that would become, thanks to an erroneous attribution, her most frequently quoted line. She never dared correct the misunderstanding. It hounded her when she won those prizes. It plagued her on the death of the stepdaughter she’d cared for as her own, and even when her own death started nipping at her heels. As soon as anything receded into the past, she realized that she actually enjoyed her friends’ mistakes, enjoyed contributing to the demolition of the young man who approached her as she prattled on in a corner of the hall, enjoyed pronouncing stark truths that caused the ruin of her loved ones.

I put down the letter, half-read—I couldn’t take any more of her whining—and glanced at her motionless body. Then I opened all the little wooden doors in the room that had been her workplace for so many years. I stared at the spines of the notebooks. They covered more than an entire wall, spilling out of the shelves she’d built herself, hidden behind the books. She always used the same kind of notebook at first, but they soon started changing size and color. There was a thick-notebook period and a small-and-thin-notebook period. Later, she’d settled on a specific kind of notebook that was bound in bluish leather and ruled with lines that were far too wide for her tiny script.

I sat down in her reading chair, switched on the lamp, and started paging through them. The same stories were repeated over and over in different syntax, in different words intentionally overlaid with contradictory meanings. She omitted information that appeared later on, or rearranged events out of order, or included explanations where there hadn’t previously been any. The stories grew longer and more complex. Then they shrank down until they all seemed like the very same story endlessly written and rewritten. In the last notebooks, the stories morphed into mere lines, as if marking her mental activity in waves, peaks, and valleys, grounded in nothing but the green strokes of a pen on paper.

I was supposed to organize the funeral. She’d made the request in writing, the lawyers told me that night. This information and her other wishes lured journalists like wayward men to siren songs. Disputes with the leaders of the writer’s sect were made public. Under the dark tunics and demonic masks they used to conceal their identities, they declared that her body must be buried without pollutants: naked and alone. No one but they must know the location of her grave, and no mark or fire must inscribe it. After a long discussion among the lawyers, trying to avert a scandal, and after various intrusions by the literary milieu and the fans amassing outside what had been the writer’s home, but now served as storage for my furniture, I managed to orchestrate her cremation behind everyone else’s backs and attended it as a spectator.

“One cold winter evening, I stood before the snow-white body of the writer and watched it blaze inside a concrete grid.” So begins my prologue to the edition of her Dirty Notebooks, which is how I chose to title the anthology of her posthumous work.


Previous post
Save 40% AND Get a Free T-Shirt for Women in Translation Month
Next post
TMR 9.06: Monsterhuman by Kjersti Skomsvold (pgs 226-274)