This week’s Best Translated Book Award pose is from Louisa Ermelino, who is the author of three novels; Joey Dee Gets Wise; The Black Madonna (Simon and Schuster); The Sisters Mallone (St. Martin’s Press) and a story collection, Malafemmina (Sarabande). She has worked atPeople, Time International, and InStyle magazines and written stories for anthologies and articles and book reviews for Kirkus, the New York Times, Saveur, Glamour, and several other magazines and newspapers. Since 2005 she has worked at Publishers Weekly magazine as Director of Reviews and now writes a column, Open Book, about noteworthy forthcoming books, interviewing authors, editors, and agents.

I am always thinking of books and authors and stories and far away places and having just traveled to Iran, I was reminded of Negar Djavadi, a French Iranian writer who was born in Iran and came to France as a child. Her wonderful novel, Disoriental, follows an Iranian family through three generations in Teheran and Paris. It’s beautifully translated from the French by Tina Kover, published by Europa, and was a finalist for the National Book Award for translated literature for 2018. And this all makes me think about language. Hearing Persian spoken, seeing it written in Arabic calligraphy, thinking about reading an Iranian author writing in French whose work has been translated into English. The wonder of it all. The gift of translation, that can open another world, take an unfamiliar tongue, an unfamiliar alphabet and present it to us on a silver platter. I learned a new word in Iran: “Bali,” which means “yes” in Persian. I never needed the word for “no”! 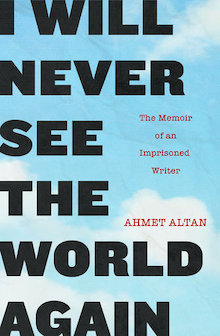 I went on to Turkey, where the good news of writer and journalist Ahmat Altan’s release from prison was momentary and he was rearrested. His memoir I Will Never See the World Again is from Other Press, translated from the Turkish by Yasemin Congar. And so I think about protest, the pen mightier than the sword, writers the first in the line of fire. Mussolini exiled them to remote villages, as with Carlo Levi, who wrote the amazing Christ Stopped at Eboli about his year of political exile in a small town in southern Italy.

I meet Sebnem Isiguzel, the Turskish author whose novel The Girl in the Tree is her first to be translated into English (she’s written ten) and will be published by Amazon Crossing in March. Inspired by the protests in Istanbul in 2013 against the urban development of Gezi Park, the novel’s protagonist, a young girl horrified by the violence, retreats to an abandoned stork’s nest in the tree tops. Isiguzel’s agent, Nermin Mollaoglu, says she loved the book so much, that the agency paid for the translation (by Mark David Wyers). Isiguzel says she is excited to be published in English, to bring the voice of Istanbul to American readers. “All my dreams are on paper; I live for literature,” she tells me. I leave Turkey: A new book to read . . . and a new friend.