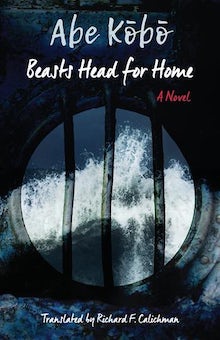 Crisp, stark, pristine scenes of gaunt settlements, vast wilderness, and tense human encounters fill this 1957 novel by Abe Kōbō, the story of Kyūzō, a Japanese youth raised in a nondescript city in the interior of Manchuko during the Japanese occupation of Manchuria.

Japan’s defeat in 1945 finds an orphaned Kyūzō living as a prisoner-servant in a garrison of Soviet soldiers. But Kyūzō manages to escape, hoping to reach the coast and find a boat that will carry him to Japan for the first time, his head filled with idyllic notions from his local Japanese school, textbook scenes of an honorable, cherry-blossom homeland.

Kyūzō stows away on a southbound train but is discovered—before the train rolls out—by his Soviet captors, who have come looking for him; in a touching moment they don’t ask about the supplies he has stolen, including some of their personal possessions, and even give him a generous roll of cash to help him on his way. Beyond that charitable instant, the demons of deceit and treachery hover over every scene as Kyūzō’s journey becomes an agonizing pilgrimage fraught with gruesome suffering and abysmal confusion.

The train crammed with Japanese refugees is sabotaged and waylaid in the frozen winter wilderness by Chinese nationals intent on preventing their escape. When the train tries to ram its way through the blockade, Kyūzō’s hopes of a swift journey home are literally derailed. The ensuing train wreck and its aftermath are intense and startling—a firefight breaks out, and a Soviet fighter swoops down to strafe the scene:

“The battle ceased for some time. The groans of the wounded sounded just like the call of beasts. Although cold dulls the pain, those who cannot move from loss of blood soon freeze if they don’t scream and warm the body. A cry like a large-throated bird rang out two or three times from the passenger car above. Perhaps it was a baby. The wind began to pick up.”

In the fearful chaos that follows, Kyūzō finds himself accepting advice, and then orders, from an older man named Kō, a worldly, dangerous character; alternately brigand and guide, he pressures Kyūzō to throw in his lot with him, claiming to be the young man’s best bet for making it home.

As the two men leave civilization behind, moving through the liminal world of the wilderness in a phantasmagoria of mutation, the novel’s focus on man’s incessant, fruitless struggle with his bestial nature informs nearly every page.

The mark of the beast is almost always in sight. The examples are many, from small details—Kyūzō’s jacket is lined with rabbit fur, Kō’s with dog hair—to weird, nightmarish scenes, such as when the men seek refuge from the chaos and biting cold in the dark forest: “When they struck a match to investigate, a round bird the size of a human child suddenly appeared before them, flying off with a loud squawk like the sound of horse hooves.”

Kyūzō’s fear of wolves in the woods is rebuffed by Kō, who reminds him that the animals will sate themselves on the abundant corpses from the train wreck and battle. Nonetheless, a wolf does come to spy on them: “Hearing a sound, [Kō] pointed beyond the fire. A beast that looked like a filthy dog slowly passed by with slanted, faltering steps, its neck hanging so low that it nearly touched the ground.”

The two men walk, run, stagger, stumble, and crawl their way through a brutal, frightening trek for survival across the frozen wastelands of central Manchuria, heading south toward Liaodong Bay to find a ship out of China. Trying to move through the wilderness undetected by unfriendly Chinese soldiers, the two undergo a memorable epic of real suffering—starvation, frostbite, thirst, injury, amputation—faring worse than animals, at one point stalked by four hungry wild dogs that, given the chance, just might attack and eat them.

The fear and desperation of their increasingly weird nightmare together evoke the frightening journeys found in a variety of stories, such as Edgar Allen Poe’s Narrative of Arthur Gordon Pym of Nantuckett, J. M. Coetze’s Waiting for the Barbarians, and more recently Jeff Vandermeer’s bizarre Southern Reach Trilogy, but perhaps the most telling analog is Akira Kurosawa’s great 1975 film Dersu Uzala, the Hunter. Kurosawa’s film is an adaptation of the 1923 memoir Dersu the Trapper by Russian explorer Vladimir Arsenyev, in which he recalls how, as captain of an army troop surveying the western reaches of Siberia, he meets and makes friends with Dersu, a Nanai hunter who has lived his whole life in the wild. However, Kyūzō and Kō’s survival story enjoys none of the noble brotherhood that develops between Vladimir and Dersu; instead, their relationship is lunatic, desperate, and depraved. And while they are driven to avoid detection until they can reach the coast, Kyūzō’s greatest fear, and strangest nemesis, is Kō himself.

Kō is a crafty survivor, a shapeshifter, of no certain nationality—he alternately veers, as it suits him, toward being Japanese, Chinese, or Korean; sometimes he is the wise older guide, at other times he must depend on the younger man, even as Kyūzō, fearing that Kō might murder him for his money, wonders if it’s all an act. Even so, they experience a peculiar inversion of authority. As Kyūzō is forced to take charge of an ill and delirious Kō, the reader is challenged to reconsider Kyūzō’s naiveté, his lack of experience outside his hometown, in the face of Kō’s cynical opportunism.

Their hell, which is each other—the naive Japanese youth who has never known his homeland, and the peripatetic grifter of uncertain, fluid nationality—is bottomless. Even as they traverse the wilderness and make it back to civilization, what seems their creepiest, possibly lowest point— finding in an abandoned farmhouse the old mummies of a family who died on their own pilgrimage to nowhere—is really an antechamber to darker depths.

Using recent twentieth-century tragic history as a backdrop, Abe’s 1957 work posits the protagonists’ antagonism as both a reflection and an inversion of betrayal. The Japanese invasion and colonization of Manchuria was brutal for both the Chinese and, as the novel shows, to the Japanese who perished there for the emperor’s cause. Kyūzō’s parents both die there, his father, for reasons unclear, early in their settlement, his mother from a stray bullet just after the Soviets arrive. Kyūzō’s tragedy thus encompasses a strange land where he does not belong and a homeland he can never reach, one he can only imagine in the most stereotypical notions. Similarly, Kō, a manic two-bit criminal without a nation, fights for neither the Nationalist Army nor the Communists, and despite a formidable will to survive he cannot endure the depredations of those more ruthless than himself.

The novel’s title suggests both a homing instinct—Kyūzō’s drive to find his imaginary homeland—as well as a predator’s fixed gaze as it homes in on its prey. The beasts of this novel are human, rapacious conquerors and ruthless survivors, as well as those degraded, driven, and deranged by usurious circumstances, stripped of, or forced to abandon, their humanity. The greatest mercy Kyūzō receives comes from a street urchin who survives by trapping and slaughtering stray dogs, and selling their meat. Kyūzō even seems in danger of suffering a similar fate, but his own fate might be worse.

Kyūzō’s guileless determination makes him a sympathetic figure, and while every clue points toward disaster, one hopes for the best for him to the very last. But the only Japan Kyūzō reaches is a Japanese merchant marine ship where his hosts offer him a Blackbeard’s bargain: don’t go snooping around and things might turn out alright. Kyūzō doesn’t know that he’s seeking refuge in the arms of the nation that committed the massacres in Nanking, a nation that lost its greatest war and has nothing more to lose; and even when this fact is explained to him bluntly, it cannot, does not, register. He is the unfortunate innocent who has depended on others his whole life; despite remarkable strength and weeks of endurance, his journey seems an inevitable descent into madness that only reduces him to a cypher.

Richard F. Calichman’s smooth, lucid translation offers the reader a dark, memorable flight into increasing claustrophobia, no less grim than plots by Kafka or Beckett, with a palpable share of the latter’s bleak humor. Beckett’s tragicomedies trace absurd closed loops—Abe Kōbō’s choking Möbius strip of disasters and betrayals is as snug as a guillotine yoke, but the urge to test its fit is nearly irresistible.

One response to ““Beasts Head for Home” by Abe Kōbō”