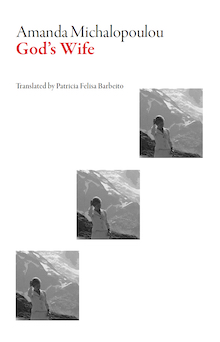 Why do people get married? Maybe because they need a witness to their lives, someone to watch them do whatever it is that they do. In Amanda Michalopoulou’s novel, God’s Wife, the husband is God himself; the wife is a human, an oh so human, narrator. God, in all his magnificence—bathed in light—thinks marriage is the station, the destination; the wife thinks it is the train. And now, after years and years of life together, the thrill is gone: he seems fixed at the initial stage, loving her as much as he always did, exactly like he always did. She asks for something more and for something different. This is the material of any marriage on the rocks, yet, in this case, there is a huge peculiarity. He is God for god’s sake.

Amanda Michalopoulou can give substance and voice to the improbable; she is the kind of writer who makes a black swan look perfectly wonted. In her previous novel Princess Lizard, a few ghosts were fluttering about —and made perfect sense. In this one there is no metaphor: God has proposed to a girl and the girl said, well, yes. The heroine has never spoken to this day; now, she does; and she asks a lot of questions. A lot: about the Creation, about love, sex and the meaning of life. God has no answers; he is appropriately enigmatic and irritatingly unsavory. And sexless to boot.

This is not the only odd notion in Amanda Michalopoulou’s novel, which becomes odder still in the social context of a gender shifting God: is God a he or a she? Not that anybody should care, but, in this story, rest assured he is definitely a he, withdrawn from worldly life and frankly a tad boring. God sits at the center of a dreamy, spotless home, full of non-fiction books: science, philosophy, religion, you name it; he is the ultimate bookworm but doesn’t go near literature—literature reminds him of the screw-up of his creation, οf his aborted attempt to turn chaos into something neat and attractive.

She, the wife, is an unreliable and inquisitive narrator; her curiosity and her intellect are only human; her restricted capacity is a source of agony for her. How can she be happy without knowing the truth? How can anybody be happy? How did a perfect God make all this mess? What was he thinking? And so on. But her imagination is limitless: it can capture everything, even the aforementioned unthinkable. So, God’s wife, overwhelmed by the mental vertigo of doubt, resorts to fiction, to literature: literature becomes her religion. It’s an act of adultery: she pursues her own cosmogony hiding from the omnipresent but not really omnipotent spouse—and in the end she gives birth, with a pencil hidden in her body, to a literary universe.

The theme and the story-line may sound preposterous; it is a fantasy and fantasies tend to borrow from the toolkit of the absurd. However, the technique, the texture so to speak, is totally realistic and the structure down-to-earth (I am not sure if the pun is intended). Amanda Michalopoulou recounts the journey of a woman from an earthly life to the timeless and immaterial realm of God and then from ignorance to knowledge, from unconditional love and devoted witnessing to defiance. As if it were any other journey with trains, stations and destinations.

The novel can be read as a feminist allegory, but I would resist the temptation. I would opt for the quest of meaning through writing, through storytelling; through plots, words, tongues and characters. God’s Wife is a woman who, left to her own devices, becomes a she-God, a Creator, not of a deficient universe but of an alternative world made of pages and pencils and bookends. Writing fiction is not only a salvation through self-fulfillment, it is a faith. That said, the novel is full of cracks, of crannies: a lot is being said (or re-said through Plato, Emerson, Spinoza, Pascal, Lacan, Nietzsche, such and such), a lot more remains unsaid or fleetingly hinted at: writing books is a religious redemption and the worshippers should kneel among them and pray to Holy Literature. Amanda Michalopoulou builds God’s library and puts a ladder next to it. Whoever wants to read must climb the ladder.

Soti Triantafyllou is a writer and scholar based in Paris.