Season Twelve of the Two Month Review: “Cars on Fire,” “Four by Four,” and “The Book of Anna”

As announced during the last season of the Two Month Review, we’re going to try something different this time around. Instead of focusing on a single, long book, we’re going to cover three short ones—all written by Spanish female writers, all translated by women, and all released during the lockdown. 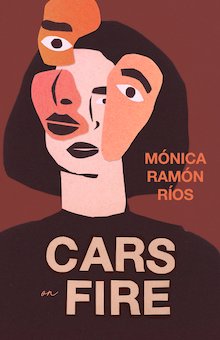 Cars on Fire, Mónica Ramón Ríos’s electric, uncompromising English-language debut, unfolds through a series of characters—the writer, the patient, the immigrant, the professor, the student—whose identities are messy and ever-shifting. A speechwriter is employed writing for would-be dictators, but plays in a rock band as a means of protest. A failed Marxist cuts off her own head as a final poetic act. With incredible formal range, from the linear to the more free-wheeling, the real to the fantastical to the dystopic, Ríos offers striking, jarring glimpses into life as a woman and an immigrant. Set in New York City, New Jersey, and Chile’s La Zona Central, the stories in Cars on Fire offer powerful remembrances to those lost to violence, and ultimately make the case for the power of art, love, and feminine desire to subvert the oppressive forces—xenophobia, neoliberalism, social hierarchies within the academic world—that shape life in Chile and the United States.

This book is absolutely incredible, and earned a *starred* review from Publishers Weekly! Here’s the reading schedule, with the dates for the live YouTube broadcasts. (The podcast version will go up either later on that Wednesday, or Thursday morning.) 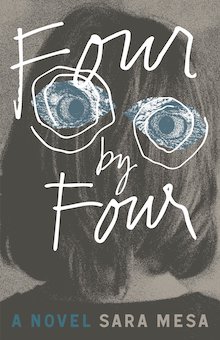 After that, we’ll move onto Four by Four by Sara Mesa and Katie Whittemore, a novel I’ve written about a billion times on here already. But here’s our copy:

Set entirely at Wybrany College—a school where the wealthy keep their kids safe from the chaos erupting in the cities—Four by Four is a novel of insinuation and gossip, in which the truth about Wybrany’s “program” is always palpable, but never explicit. The mysteries populating the novel open with the disappearance of one of the “special,” scholarship students. As the first part unfolds, it becomes clear that all is not well in Wybrany, and that something more sordid lurks beneath the surface.

In the second part—a self-indulgent, wry diary written by an imposter who has infiltrated the school as a substitute teacher—the eerie sense of what’s happening in this space removed from society, becomes more acute and potentially sinister.

An exploration of the relationship between the powerful and powerless—and the repetition of these patterns—Mesa’s “sophisticated nightmare” calls to mind great works of gothic literature (think Shirley Jackson) and social thrillers to create a unique, unsettling view of freedom and how a fear of the outside world can create monsters.

An excellent pandemic book! And here’s the schedule: 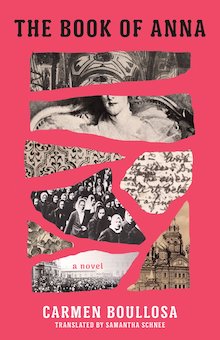 Finally, the third book is The Book of Anna by Carmen Boullosa and Samantha Schnee, and published by Coffee House. Here’s their description:

IN THIS CONTINUATION OF ANNA KARENINA’S LEGACY, RUSSIA SIMMERS ON THE BRINK OF CHANGE AND THE STORIES THAT HAVE LONG BEEN KEPT SECRET FINALLY COME TO LIGHT.

Saint Petersburg, 1905. Behind the gates of the Karenin Palace, Sergei, son of Anna Karenina, meets Tolstoy in his dreams and finds reminders of his mother everywhere: the vivid portrait that the tsar intends to acquire and the opium-infused manuscripts Anna wrote just before her death, which open a trapdoor to a wild feminist fairy tale. Across the city, Clementine, an anarchist seamstress, and Father Gapon, the charismatic leader of the proletariat, plan protests that embroil the downstairs members of the Karenin household in their plots and tip the country ever closer to revolution. Boullosa tells a polyphonic and subversive tale of the Russian revolution through the lens of Tolstoy’s most beloved work.

This sounds absolutely wild, and will be a lot of fun for any and all Boullosa and Tolstoy fans out there. Here’s the schedule:

There you have it! Go out and buy all three books and join in the conversation, either on YouTube, Apple podcasts, Stitcher, Spotify (as soon as it’s processed!), or wherever else you get your podcasts.

Previous post
“The Cheffe: A Cook’s Novel” by Marie NDiaye [Why This Book Should Win]
Next post
Nothing Adds Up Until You Overthrow the System