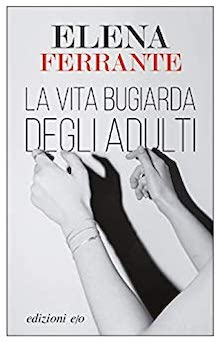 If all had gone as planned—which is to say if a global pandemic hadn’t bulldozed our normal lives—this summer, you might have been reading Ann Goldstein’s English translation of La vita bugiarda degli adulti, the new novel by Elena Ferrante. Instead, we’re still stuck in a viral vortex and the release of the English version, entitled The Lying Life of Adults, has been postponed until September.

So while we wait, I’ll give you a review of the Italian original—and as far as plot, pacing and characters are concerned, it really doesn’t make any difference. I’m not employed by Ladbrokes or anything but I would wager there is essentially zero chance that while Ferrante’s Italian original engrossed me, Goldstein’s English version won’t. Goldstein has built a sterling reputation by translating not only all of Ferrante’s works into English but also by overseeing the release of Primo Levi’s Complete Works in English. Primo Levi, folks.

Indeed, Goldstein is positioned well because I see the new novel—about a young girl living in Naples at the dawn of her teenage years who uncovers details about her family history—as a compromise between the sweeping four-book Neapolitan series that began with My Brilliant Friend and Ferrante’s earlier novels. A compromise in terms of length—Bugiarda runs 300 pages—and one in terms of scope and ambition, too.

It’s a distinction worth noting because I consider the earlier novels—The Days of Abandonment and The Lost Daughter, in particular—small literary earthquakes that unleashed something powerful and at times disturbing. (As James Wood said in his famous New Yorker review about Ferrante’s work, “It assails bourgeois niceties and domestic proprieties; it rips the skin off the habitual.”)

In fact, when I recommend Ferrante to readers, I always tell them to read those two early novels. And as far as the depiction of female characters in fiction goes, I think I have good reason. The Days of Abandonment is, after all, where the main character, Olga, who has been cuckolded not only by her husband but by the family’s underage babysitter, viciously attacks the pair on the street in broad daylight, noting as she strides toward them that she “felt no desire to cry or scream or ask for explanations, only a black mania for destruction.” (Translation care of, who else? Ann Goldstein). A black mania for destruction. Like a ferocious Angela Bassett setting fire to the car in that scene from the movie “Waiting to Exhale”!

Ferrante’s female characters are fully-dimensional, nuanced, flawed individuals, like centuries’ worth of male characters. Reading the two earlier novels, I’ve fantasized about a re-boot of The Odyssey, with Penelope as Odysseus—the one who wanders, sometimes recklessly. Perhaps it’s because as Meghan O’Rourke once noted in the Guardian, Ferrante writes about “women’s experience without trying to find anything redemptive in it, and in doing so peels away superficial assumptions.” In other words, we women are crappy, too. And this is especially obvious in spare, concentrated works like The Days of Abandonment.

It’s not that I, too, didn’t ravenously read all four of the books in the Neapolitan series—I did. And certainly, Ferrante continues in the series with the themes from the earlier novels, but I don’t think they had the same literary quality as the shorter works. I think, as some Italian critics pointed out, the writing (in the original Italian) was sloppy in places. There were sections where the prose could have been tighter, improved.

All the works—including this new book—showcase Ferrante’s sterling storytelling abilities. In fact, it almost doesn’t make any sense to parse too much or question narrative decisions when, at the end of the day, the new novel is suspenseful—a page-turner.

Ferrante uses a sophisticated form of bait and switch in this new work by training our eyes immediately on one set of ruptures—between Giovanna, the young protagonist, and her parents, and between her parents and her father’s sister—while setting us up to swoon when another, equally devastating schism emerges.

I won’t say any more about that because to do so would require a spoiler alert. But with both of these plot points, she reaches into her novelistic toolbox and pulls out the implements she wields most authoritatively: moments of discomfort, predatory relationships, awkward scenes between loved ones, infidelity, power, not to mention something as fundamental as the nature of evil (and how it manifests itself in our everyday relationships). At one point in the new novel, the narrator reflects on something Ferrante terms ‘un’impressione di malvagità.” Malvagità—there’s a Ferrantian flourish. The word refers to a state of wickedness, of cruelty.

Like in all of her works, she has crafted characters whose desperate longing and insidious desires are—in the language of web analytics—sticky. This is after all the woman who describes in Frantumaglia her tried and true approach to writing as putting her fingers inside wounds of hers that have not completely healed, that are in fact still “infected.”

Such an approach makes us want to know more—to read more. Here, when we see the young narrator’s attraction for the aunt with whom her parents have broken off relations, we get it, even as we can also instantly see the aunt as a predator who won’t be content to simply get to know her estranged niece (single, flashy and childless, Zia Vittoria drives fast, curses and talks about romantic relationships in non-Hallmark Channel tones). Much of the early part of the book depends on building suspense as Giovanna is drawn into her aunt’s confidence and her world. What will happen when Giovanna sees her next?

Ferrante’s writing about friendships, particularly between women, and about relationships between mothers and daughters has been widely covered in previous reviews of the earlier works. Here in the new novel we have a few other relationships to which she turns her unforgiving laser focus: the father-daughter dynamic; the dynamic between a child and her parents’ friends; and as mentioned above, the familial ties between a niece and her aunt, or really any estranged relative.

Ferrante always goes where the emotional fires are raging, whatever their cause or attributes. One fire, in general, is the evolution from our childhood views of our parents in their adult world, and our more mature perspectives. That pivot—which here is buttressed by a short treatise on class relations in Naples—is at the heart of the novel. Early on in the book, Giovanna observes, “Imparai sempre più a mentire ai miei genitori.” She finds herself lying more and more to her parents—and as the book goes on, she learns just how much her parents have been lying. To her. To each other—and to themselves.

Here to exploit this shift is the aunt. Indeed, Ferrante shines when it comes to fictional villains. In one scene between Giovanna and Zia Vittoria, the young girl seeks comfort by proposing to confide a family secret, evidence of which she has recently witnessed. But the aunt isn’t playing along; when asked that she not tell anyone Giovanna’s secret, she replies acidly that she doesn’t make those kinds of promises, adding, “Fottiti.” Literally: Fuck yourself. Screw you. (I’m holding my breath to see how Ann translates this). The aunt, who never made it out of the old, rough-and-tumble neighborhood and sprinkles her conversation with saucy bits of dialect, goes on to say that the bad thoughts you keep inside become ferocious dogs that bite your head off while you sleep. Oh wait, there’s more! Giovanna is so desperate for some communion, desperate to unload this awful thing she has witnessed that she finally reveals what she knows, begging her aunt not to tell her father. To which Zia Vittoria replies, “You think your father gives a damn about that?”

Remember that moment when you realized your parents weren’t saints? That your relatives were maybe all drunks? The time you tried to tell a loved one your deepest fears? Or your closest cousin said the guy you loved was a loser? You’ll be reliving all those salient moments of your maturation while taking in this new Ferrante book.

In this one quick comment from her aunt, the young, fragile narrator is not only deprived of the succor typically afforded by an important adult relationship in her life, but she is told that her father—whom she thinks of as a sensitive intellectual—is so callous as not to care about this particular secret, which will ultimately devastate Giovanna’s household.

It’s a salient, unflinching Ferrantian moment. But one that’s unfortunately dimmed by the nature of the book’s main character, which is to say Giovanna. I don’t find Giovanna quite as sympathetic as Olga, say, or even Elena in the Neapolitan series, though all three are bookish female characters who clash one way or another with men or the world men created. She’s also less sympathetic than another young teenage protagonist in recent Italian fiction: the narrator of Donatella Di Pietrantonio’s A Girl Returned (also translated by Goldstein and also published by Ferrante’s publishing house). This dampened the appeal of the book somewhat for me.

Some of the plot also strains credulity. At the outset, the girl is embarking on her early teenage years and by book’s end, she’s hardly much older. Yet she comes and goes from home as she sees fit, traveling twice from Naples to Milan without her parents and without, say, a school chaperone or trusted relative. I suppose part of this freedom can be chalked up to the turmoil stemming from the book’s second schism.

There’s also a promising but underexploited subplot involving a charismatic man who’s deeply religious. Giovanna swoons over him, and Ferrante effectively conveys a dynamic that isn’t simply that of a young girl meeting an older, alluring man but rather of the frisson new acquaintances can stimulate. Yet I was maybe expecting a bit more from this.

Similarly, the book’s conclusion feels vaguely unsatisfying, perhaps because Ferrante is such a good storyteller and she drills down on themes that are, again, sticky, all of which lead me to expect more. It’s almost as if a final chapter were lopped off during the editing process. The last scene certainly signals Giovanna is growing up, entering the woefully mendacious world of adults. But the conclusion neither ties up narrative strands nor deliberately leaves things unresolved to reflect the sense of flux that permeates adult life.

I say all this full-well knowing that Anglophone Ferrante fans will seek out the new book, come September (and I am recommending as much myself). In fact, I’ll be cheered by any reader who picks up this work of translated Italian fiction. Besides, it’s always entertaining to see what Ferrante will produce when she mixes women, men, love, discomfort and growing pains together.