The other day, the Major League Baseball season—or, rather, “season,” given that it’s 60 games; given that instead of ten teams making the playoffs, sixteen will, which is more than half the league; that every extra inning starts with a runner on 2nd base, which is very weird; and, obviously, COVID protocols and a 60-man taxi squad for dudes who test positive—kicked off. The first game was rained out. Because of course. 2020!

But the first weekend was almost a success! Baseball was played, playoff odds shifted, Flaherty flourished, the Cards won two and then lost, and Ohtani got ROCKED. Which broke my heart. Watching Otahni and Trout at the top of their games is a gift to baseball fans everywhere.

Given how awful this summer is (I just remembered this song earlier today and am now playing it to death), baseball, this never-ending, not very popular game that’s being played with no fans—well, there are plastic/cardboard(?) cut-out fans in some stadiums, totally mis-sized, the things of nightmare, and, unfortunately, sturdy, depriving all of us of the joy of seeing Joey Gallo decapitate some dude’s dog—could be my only real joy until . . . God only knows. But as much as I’m willing to overlook in order to at least have baseball, there is some weird shit that deserves attention. 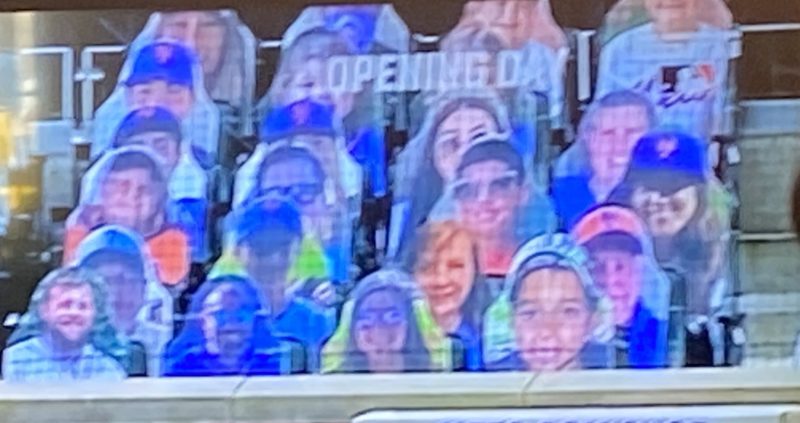 On Friday night’s Cardinals vs Pirates game, in the top of the fourth inning, there was a man on first and Bryan Reynolds hit a grounder to Kolten Wong, who flipped it to Paul DeJong, getting Kevin Newman at second before . . . DeJong swallowed the throw to first. This in and of itself is not particularly noteworthy, but the “crowd” response definitely was. As the play started, there was a rush of enthusiasm—”perfect double play ball!”—and when DeJong didn’t even throw over, a sort of disappointed sigh—’why didn’t you complete the great play, ya bum!!!”—that, assuming DeJong could hear it, was judgmental as fuck.

It would be bad enough if these were actual fans, but they’re not! No one is in the stands watching the actual game. The fans are at home, with their iPads and big TVs, having their assessment of DeJong’s defensive abilities swayed by the fake crowd blasting through earbuds.

The thing about baseball, the number one reason I like it, is because every single aspect of the game is difficult. Throwing a baseball so incredibly fast, or with such movement, that a grown man with a bat—who has hit tens of thousands of baseballs in his life—will miss it enough times that he strikes out seems impossible. (The season with the most strike outs ever was last year, 2019, with 42,823.)

The idea of hitting a ball—be it a 95 mph fastball, letters high, or a slider gliding across the plate at 82—seems equally impossible. Even in the “good old days,” hitting .350 was an incredible feat—meaning you still failed almost two-thirds of the time. (The most homeruns in a season was last year, with 6,776, a whopping 671 more than the previous record. That’s approximate a 10% increase in the record.)

Fielding isn’t very fun either. Not that players don’t mostly succeed at this—there are players who have a lifetime fielding percentage above 99%, the league as a whole was at .985 in 2013, and that’s normal—but every time a player doesn’t make a play, the crowd reacts as if they aren’t doing a nearly impossible task every other time a ball comes their way. Watch a MLB player dive for a ball at third, get up, and throw out a world-class athlete sprinting down the line and then imagine yourself in that situation. Imagine tracking a ball that goes a couple hundred feet in the air and covers 350 feet on the ground. It’s easier than anything else I’ve mentioned, but definitely not easy. Nor is stealing bases! It’s all hard!

Which creates such a beautiful equilibrium. Everything that happens in a game feels equally unlikely.

It’s hard to go back to playing MLB The Show now that real baseball is here. I’ve fallen into a very weird uncanny valley, in which I’m not 100% sure which game is real. When I’m watching live, I’m calling pitches in my mind, and feeling my finger twitch as the ball approaches the plate. Goldschmidt’s homerun from the other day was one that almost caused me to convulse on the couch as I jumped on that pitch with the maximum effort I give to every ball I swing at in my video game life. I’m way too absorbed into this game. (Thank you, quarantine!) I’ve been trained into its rhythms, the generalized likelihood of what’s coming next, and the exact nanosecond to hit the correct button.

(On the other side of the valley, I recently warmed up my least reliable relief pitcher in the 6th inning of a game, hoping to piss off Video Game Adam Wainwright and motivate him on the mound. Again, in a videogame. One in which I personally control a significant portion of his success.)

But I’m a game and a half in front of the Cubs, heading into the final part of August! This is the most exciting time for baseball. The time when the background noise that has colored your entire summer—win streaks, impressive player accomplishments, so, so many homeruns, surprise rookies and struggling giants—starts to feel a bit anxious. The end is coming. Summer doesn’t last forever. (Although this summer is lasting forever, never becoming summer, and never becoming something you want to remember forever.) If you want a few more games, a little bit more adrenaline and hope and worry, something to distract you for one more month, you need to hit the gas right fucking now.

In this video game. Where it’s the end of August.

Sure, the 60-game season is a “sprint,” and I kind of totally love it, since the stakes seem so much higher for each individual game, but it’s not nearly the same as being incredibly invested in the final 40 games after a 122 game grind. By this point, statistics have stabilized; everyone on the field has a plan on how to approach each other. Winning in September is winning when teams have the most knowledge about how to defeat individual tendencies. It’s not a fully mental game, baseball, but it’s a game in which, since its inception, people have been trying to drill down to figure out the essential question: “In this game of mostly failure, why did this work?”

You can start by looking at how often a player misses a 2-seamer in a particular part of the plate. How often he swings at them. What trajectory those pitches tended to have when he missed vs. when he made contact. What the likelihood is that this particular pitch will help our team win the game? And how can we leverage all of this information to win 56% of the time. (Slightly higher than a Vegas casino, but really, winning 56% of the time feels almost abusive in its inconstancy.)

What if instead of focusing on how the three true outcomes (strike out, walk, donger) are ruining the game of baseball by eliminating balls in play, we framed it as how the three tough accomplishments (dinger, whiff, making a catch) were elevating the difficulty of the sport?

Please don’t let the Marlins fuck this up for everyone. Seriously. How could half your team—and only your team—get the COVID?? God damn Florida. You wonder why you’re the butt of all the jokes.

But seriously: I need this. In a year in which all the seasonal, time-based rituals of our “normal” existence have been completely and utterly annihilated, having one thing to count on—sixty games in seventy days—feels monumental. Finding a routine in COVID has both been easy and insanely difficult. Easy if you indulge in the sloth, in the shuffling off of productivity, and instead embrace the feeling that the world is slowly shutting down, that none of this is really real.

Surreal, almost unreal baseball, but something to watch, to follow, to refresh. A genuine distraction. A new way to monitor the passing of time.

The relationship between baseball and time is so fascinating. “The only sport without a clock,” as the old timer broadcasts like to say over the radio. Which is true, but also a bit of an illusion, since the majority of games end within 10-15 minutes of one another.

To be honest, most games last about three-and-a-half hours. Which, to many, seems interminable! Soccer and basketball are around two hours each, whereas football is, in my best estimation, about 14 hours per half.

But going back to baseball: sixty three-and-a-half hour games produces 210 hours of entertainment—for just your team. Thanks to the way the schedule is arranged, if you really wanted to, you could watch three games a day, which, including your team’s off days, could conceivable add up to watching 735 hours of live baseball over the next two months. That’s seventy-three ten-episode Netflix shows. A ton of content.

Even when we look at a full, “regular” season, the perceived endlessness of the baseball season is quickly codified into very specific, countable numbers. In a normal summer, barring injury, you know that “your guys” will get about  620+ at bats over the course of these six months (that’s one hundred and three times a month you could watch or hear your favorite player bat, or, roughly 3.5 times a day).

That might seem like a lot—if you’re counting COVID sheep, you definitely don’t want to get to 620—but still, spread out like that over six months, it feels like Trout is rarely actually batting. Maybe he’s at the dish for 10-12 minutes a night. Again, extremely finite.

And by the end of the summer, your average star will have accumulated 130-150 hits, maybe 30 homeruns, a handful (or couple dozen) steals. Numbers that are remarkable in how pedestrian they are. For as long as any given game might seem—or, in the aggregate, the an endless summer’s worth of baseball—I can count to one hundred and fifty. That’s not that many times that a player was successful. Hell, I can probably even count to 150 over the course of a single at bat!

The timelessness of baseball is an illusion we’ve chosen to believe in. We want it to be super long, in which every individual play is tempered by thousands of others, so that the data we can strip from the events themselves becomes stable, predictable. We believe in a 162-game season being long enough to eliminate flukes and small sample sizes, thus rewarding the best, smartest, most talented—and, cough, lucky—teams in the game.

And if there’s one other core attribute to baseball, it’s that traditionalists will always be desire the past. Back when there was no DH in the National League. When no one wore batting gloves, and only the top two teams made the playoffs. The grass smelled better back then, apple pie was always on the counter, and everyone stood for the National Anthem.

God, I hate this sort of nostalgia. All this garbage feels like a false narrative constructed to get away with excessive ticket prices, questionable business practices (playing in the time of a pandemic, FOR EXAMPLE), and generally uncouth behavior. It’s such an illusion. That time is past. And will never be recovered. Entropy always wins. Or, put in a more positive light, all the traditions, the old systems, that are immutable? Well, they’re totally mutable. And if baseball can accept a 60-game season with a 16-team wacky playoff structure, what else can tumble once we stop accepting these illusions without question?


Previous post
TMR 12.7: “Heroes and Mercenaries” [FOUR BY FOUR]
Next post
Baudrillard in the Time of COVID