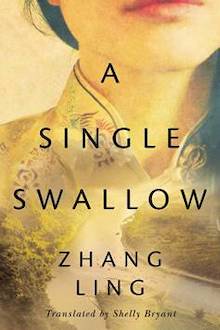 A Single Swallow by Zhang Ling, translated from the Chinese by Shelly Bryant (AmazonCrossing)

Forthcoming on October 1st from AmazonCrossing, A Single Swallow by Zhang Ling, the award-winning author of nine novels along with several short story collections. Here’s the jacket copy:

On the day of the historic 1945 Jewel Voice Broadcast—in which Emperor Hirohito announced Japan’s surrender to the Allied forces, bringing an end to World War II—three men, flush with jubilation, made a pact. After their deaths, each year on the anniversary of the broadcast, their souls would return to the Chinese village of their younger days. It’s where they had fought—and survived—a war that shook the world and changed their own lives in unimaginable ways. Now, seventy years later, the pledge is being fulfilled by American missionary Pastor Billy, brash gunner’s mate Ian Ferguson, and local soldier Liu Zhaohu.

All that’s missing is Ah Yan—also known as Swallow—the girl each man loved, each in his own profound way.

As they unravel their personal stories of the war, and of the woman who touched them so deeply during that unforgiving time, the story of Ah Yan’s life begins to take shape, woven into view by their memories. A woman who had suffered unspeakable atrocities, and yet found the grace and dignity to survive, she’d been the one to bring them together. And it is her spark of humanity, still burning brightly, that gives these ghosts of the past the courage to look back on everything they endured and remember the woman they lost.

To celebrate the release of this book—and Women in Translation Month—here’s a conversation that Lucy Silag conducted with Zhang Ling:

Lucy Silag: Tell us about Ah Yan, the main character of A Single Swallow. What makes her extraordinary?

Zhang Ling: Ah Yan, “Swallow” in Chinese, is a girl whose initiation into womanhood is marked with unspeakable atrocity, a woman who bears, with dignity and courage, the suffering and shame inflicted upon her by people she abhors as well as people she adores, and a woman who, through her action, redefines the meaning of hope and salvation.

A character pivotal to the development of the story line, Ah Yan outlives all three men who have once loved her, each in a different way. What war has snatched away from her, peace does not give her back. Bullied, downtrodden, but never defeated, she has drawn her strength from attending to the needs of others. It is her spark of humanity, burning brightly throughout her life, that brings people together and gives them hope in their darkest moments. While both of her American lovers have left her, by death and by different course of life, she provides a home and fortress to which the weary Zhaohu, her puppy love, and Ah May, her interracial daughter, turn for shelter and protection. Her extraordinary ability to endure and forgive makes her a truly remarkable woman of her time, and in fact, of all time.

LS: What inspired you to write about Ah Yan’s village during World War II? 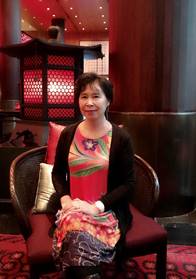 ZL: The acts of atrocity committed by the Japanese military and the great sufferings of the Chinese people during the War of Resistance (1939-1945) have not received, in my opinion, sufficient literary attention worldwide. As an enthusiastic reader of wartime memoirs, I’ve for years brooded over the idea of a Chinese war story.

A small, secretive American military group specializing in spy and guerrilla warfare, with an acronym of SACO (Sino-American Special Technical Cooperative Organization),operated in China during WWII. SACO established thirteen camps during 1943-1945 along the Chinese coastline with the dual purpose of gathering meteorological data for a possible air raid on Tokyo and training local Chinese guerrilla forces using the latest technology.

Through my reading I discovered, with great excitement, that the 8th SACO Camp was located in a place called Yuhu (or Yuehu in the novel), which was under the jurisdiction of my hometown Wenzhou, a city 800 km south of Shanghai. The American presence more than 70 years ago in a then very poor and isolated village immediately roused my curiosity. I instantly decided to write a war novel set in my hometown.

LS: The historic detail in A Single Swallow is so vivid. How did you research the novel?

ZL: I was able to arrange field trips, with the help of a local volunteer group, to visit the site of the 8th SACO camp, which has miraculously survived not only the Cultural Revolution but also recent economic development. I met with three surviving Chinese SACO trainees, an old man who worked when he was a youngster as a kitchen helper for the Americans, and some local residents with childhood memories of their interactions with the American soldiers in the village, etc. Vivid details emerged from my meetings with those people.

While my reading has helped me to gain a historic perspective of the war, the field trips helped me understand the poverty and sufferings of China as a war-torn country, the local people’s initial resentment and distrust of the American presence forced upon them, the displacement and alienation the American soldiers felt when trapped in an isolated village thousands of miles away from home, and the bond that eventually established between these two groups of people.

LS: The three narrators of the story—Pastor Billy, U.S. gunner’s mate Ian Ferguson, and local Chinese soldier Liu Zhaohu—each bring a new perspective to the story and to Ah Yan as a character. What makes each of their voices distinct?

ZL: By age and line of work, Pastor Billy is naturally the more mature and nurturing type. His mind is constantly occupied with thoughts about Ah Yan’s future when the war ends—her education, her medical career, and her financial independence, etc. His plan seems to proceed well except for one problem: he realizes, along the way, that he wants to be a part of her future, too. Sadly, he never gets a chance to find out whether his feelings for her are reciprocated.

A well-educated youth by local standard, Liu Zhaohu (“Tiger” in Chinese) gets his ideas about changing the world from his more sophisticated teachers in school, but the war shatters everything around him, including his chance to build a life with Ah Yan. Unable to overcome the shame and humiliation associated with Ah Yan’s lost virginity as a result of gang rape by the Japanese, he abandons his duty to Ah Yan and his own family, hoping in vain to die an eager and heroic death in battlefield. Forever haunted by his guilt-laden conscience, he lives his post-war years destitute of passion and enthusiasm.

Out of the three, Ian is the only one not aware of, nor bothered by, Ah Yan’s painful past. Ian’s youthful energy and free spirit breathe fresh air into Ah Yan’s care-laden life, but their flame of passion is doomed evanescent. Peace separates them as suddenly as the war has once joined them, leaving her pregnant with his child. This child, a girl named Ah May, becomes the talk of the town for many years to come, as Ah Yan never reveals the true identity of the father.

These three men each plays a different role in Ah Yan’s life. While Pastor Billy is a fatherly figure, forever living in a future tense, Liu Zhaohu seems to dwell on the past, unable to cross the gulf of shame. Ian’s youthful passion for life in its present tense seems to strike a right chord with Ah Yan. Pastor Billy embodies knowledge, wisdom and common sense whereas Ian represents youth and passion dangerously bordering on recklessness. A terribly torn man unable to put the broken pieces of life together, Liu Zhaohu, on the other hand, procrastinates whenever called upon to make a decision. Those are the elements I was conscious of while creating their individual voices. 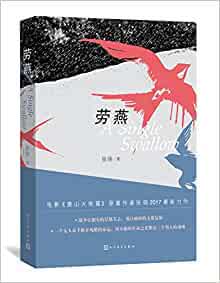 LS: A Single Swallow was released in China in 2017 to wide acclaim. What is the most common thing that readers say about it when they reach out to you?

ZL; Readers were quite intrigued by the existence of SACO camps throughout China during WWII, as this part of history is new to most of them. While outraged by the atrocity of war and saddened by the suffering of Ah Yan, they admire her incredible resilience, her innate ability to forgive and love, and her power to neutralize the most trying crises in life. Many of my readers, old and young alike, feel that there is a sense of modernity in Ah Yan, as she struggles to maintain her “five hundred pounds and a room of her own” even in the direst situations.

LS:What was the most emotional section of this novel to write?

ZL: Two sections seem to linger in my mind long after I’ve finished the novel. The first one is the farewell scene when Ian leaves the village at the armistice and his houseboy, Buffalo, runs barefoot after him, with the boots Ian gives him as a parting gift slung around his neck, to say his long goodbyes, until he reaches the port and can go no further. Fully aware this might be their last sight of each other, they wave and wave until the boat carrying Ian and his comrades fades into the deep sea.

The second section is when Ah Yan, narrowly escaping a rape attempt by a Chinese trainee who regards her as a piece of left-over by the Japanese, finally decides to lay bare the story of her past in front of a strange and initially unsympathetic crowd, just to stop, once and for all, the gossip that has haunted her wherever she goes. It breaks my heart to write about the agonizing pain inflicted upon her not only by the enemy, but also by her own people.

LS: Tell us what you are working on now.

ZL: During the pandemic outbreak in China, I was trapped in my hometown Wenzhou, the second most affected area in China outside Hubei Province (where Wuhan lies), for three weeks. Cut off from my family and social ties in a lockdown city, I succumbed to fear, both real and imagined, of my daily supply chain being interrupted. Upon returning to Toronto, I’ve started to write about my experience there. This will be my first work of non-fiction.