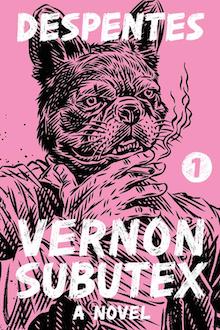 From the provocative writer and filmmaker Virginie Despentes comes volume one of her acclaimed trilogy of novels, Vernon Subutex—short-listed for the Man Booker International Prize. But who is Vernon Subutex?

Vernon Subutex was once the proprietor of Revolver, an infamous music shop in Paris, where his name was legend throughout Paris. By the 2000s, however, with the arrival of the internet and the decline in CD and vinyl sales, his shop is struggling, like so many others. When it closes, Subutex finds himself with nowhere to go and nothing to do. Before long, his savings are gone, and when the mysterious rock star who had been covering his rent suddenly drops dead of a drug overdose, Subutex finds himself launched on an epic saga of couch-surfing, boozing, and coke-snorting before finally winding up homeless. Just as he resigns himself to life as a panhandler, a throwaway comment he once made on Facebook takes the internet by storm.

We will be doing all three books back-to-back-to-back over the course of fifteen episodes. Volumes 1 & 2 are available now, and Volume 3 comes out on May 11.

There’s going to be a ton to talk about this season, especially given Despentes’s background, her earlier books (a new translation of King Kong Theory is coming out in May as well), and the unflinching descriptions of her characters. If you’re not familiar with Despentes already, here’s a brief bio:

As I mentioned above, we’re going to read straight through the trilogy, and, when possible, we’ll be bringing back guests three times each so that they can track their progress and thoughts across all three volumes. Here’s the official reading schedule:

As in seasons past, we’ll broadcast live on Thursdays, with the podcast dropping on Friday morning. Subscribe to both—and rate and leave a comment!—and tune in on Thursday, April 8th at 3pm Eastern to see me, Brian Wood, and  Derek Maine get the ball rolling . . .