“Death by Water” by Kenzaburo Oe 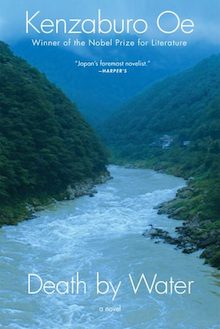 Death by Water, Kenzaburo Oe’s latest novel to be translated into English, practically begs you to read it as autobiography. Like The Changeling, as well as many other works not yet released in English, Death by Water is narrated in the first person by Kogito Choko, a septuagenarian writer with published works including The Silent Cry and The Day He Himself Shall Wipe My Tears Away. If those titles sound familiar to you, it’s because those actually are real-life titles by Oe, The Day He Himself in particular being a part of the collection Teach Us to Outgrow Our Madness.

The plot, such as it is, finds Oe’s stand-in Choko aware of the coming end of his writing career. Besides a monthly opinion piece for the newspaper, he hardly writes anymore. Ten years after his mother’s death, he suddenly gets the chance to retrieve his late father’s old, red leather trunk, containing his notes, diary entries, and evidence of his failed coup attempt after World War II and his escape from perceived authorities leading to his death by drowning. Choko feels he can finally write a definitive version of this turn of events, as in his old age he finds his previous effort, the aforementioned The Day He Himself, to be “an embarrassingly immature piece of work.” At the same time, he becomes involved with an avant-garde theater company The Caveman Group, who in the past has dramatized Kogito’s work for the stage, and is hoping to create a new work in tandem with the “drowning novel” Kogito now wants to write. The thing is, about a third of the way through the novel, Kogito discovers his mother has already destroyed most of the trunk’s contents, and Kogito finds himself unable to continue his work.

And yet, Death by Water continues to amble on for another three hundred or so pages, the ponderous middle section a more generous reviewer might call “reflective,” as Oe reconnects with his past, and reflects on the act of writing itself. The novel is absurdly self-aware, as Kogito/Oe reflects on his own quirks and failures as a writer. He even poses the question directly in a conversation with a friend, who complains:

“At some point, doesn’t it become overkill? I mean, can these serial slices of thinly veiled memoir really be considered genuine novels? . . . Why do you choose to write about such a solipsistic and narrowly circumscribed world?”

“Everything you say is true,” I said. “I admit that freely . . . but I always seem to come back to the sobering realization that if I hadn’t used the quasi-autobiographical approach I wouldn’t have been able to write anything at all. In other words, I’ve had to maintain this narrow focus out of sheer necessity.”

And while it’s true that there seems to always be a pretty strong basis of fact in even Oe’s early work, anyone who has read said work would know that Oe is capable of some fantastic, bizarre, and unreal stories. The contrast between Kogito/Oe’s early and late works becomes a major question of Death by Water, one that even Oe doesn’t seem to know how to answer. So what is better: youthful expressionism and raw creativity or the maturity, wisdom, and hindsight of experience?

It’s hard to say what Oe the writer or Kogito the character thinks on the matter. Are the late works, as Adorno says, catastrophes? Or, in the more hopeful interpretation of Edward Said, are the late works: “thrillingly catastrophic work that manages to overturn and surpass all the creations that went before?”

Oe seems to be hopeful of the latter, but I wouldn’t say that Death by Water is a successful example. The novel is overly long, disjointed, and aimless, particularly once the narrative thread suddenly revs up in the last hundred pages, and a more compelling story emerges when Unaiko, Kogito’s main liaison and friend in The Caveman Group, attempts to dramatize her own painful past via an abandoned script of Kogito’s to a conservative audience unwilling to deal with the issues it presents.

Oh, Unaiko, the true star of this show! One of the few characters in the novel who feels like a character and not simply a soapbox for Kogito to argue with, Unaiko has a story that needs telling, and a version of Death by Water two hundred pages shorter and more evenly split between Kogito and Unaiko’s creative relationship to their respective past histories seems like it would’ve made these questions of life influencing art and art influencing life much more entertaining and thought-provoking. Perhaps a younger writer would’ve dramatized her story directly. But even that raises the question: who gets to tell it; who is allowed to tell Unaiko’s story? Is Oe being respectful by not appropriating a woman’s more powerful and engaging story, one that could very well be more or less “true” for his own dramatic ends? Or is Oe, with his limitations as a writer, simply incapable of writing the story any other way?

Death by Water raises these interesting questions about mortality, political correctness, art cannibalizing life, and frankly, art cannibalizing itself, but comes up with few satisfactory answers. It is appropriately ambitious for a late work, but by being overly long, digressive, and didactic, Death by Water is more the bad catastrophic than the good. This doesn’t make Oe suddenly a bad writer—but a novel addressing your flaws as a novelist does not absolve you of said sins. Maybe just write a different novel.