“Remains of Life” by Wu He [Why This Book Should Win]

This afternoon’s entry in the “Why This Book Should Win” series is from BTBA judge Adam Hetherington. 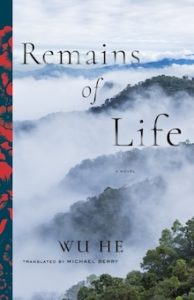 Remains of Life by Wu He, translated from the Chinese by Michael Berry (China, Columbia University Press)

On October 27, 1930, at a sports meet on an aboriginal reservation in the mountains of Taiwan, the Atayal tribe rose up against the Japanese colonial regime, slaying one hundred and thirty-four people in a headhunting ritual. The Japanese response brought the tribe to the brink of genocide

That part is true, if that kind of thing matters to you. The impetus of Remains of Life is something like an investigation into this event, The Musha Incident. In the afterword, author Wu He writes:

This novel is about three things:

Second, the Quest of Girl, Who was my next-door neighbor during my time staying on the reservation.

Third, the Remains of Life that I visited and observed while on the reservation.

All this happens concurrently, in a single unbroken, stream-of-consciousness paragraph, with fewer full stops than there are days in the week. In the text, translated by Michael Berry, a conversation with one of the villagers (the “Remains of Life”) can spark a winding, philosophical assessment of the facts of the Musha Incident—

—which can eventually abruptly be broken by the appearance of Girl, Wu He’s neighbor and guide who introduces him to even more of the Remains of Life, characters allegorically named, and sometimes renamed, for how Wu He sees and thinks of them: Girl; Boss; Pimp-Bastard; Old Man; Playboy; Skinny Monkey; any of whom might want to talk about any imaginable thing, even their thoughts on the honesty of the novel being written by Wu He.

I need to be loyal to the true face of my writing.

Clause by clause, the novel grows. Conversation, rumination, and observation are modes used to braid Wu He’s three threads, all inspiring and clarifying each other. The past refracts and informs the present, and the way we carry ourselves through the present dictates how we can think about the past. The novel builds. It cycles, it morphs, it reacts. And it grows. The block of text just keeps growing, like life. The relentless prose brings to mind Thomas Bernhard, or even Pierre Guyotat in some regards, but the effect of the prose is to me most like W.G. Sebald. There’s a shared bravery in their not explaining that which can not fully explained, and a peace in looking at it anyway. The text of Remains of Life is not showy circumlocution, or the kind of modernist mishmash you probably think of when you hear “single unbroken paragraph” or “stream-of-consciousness.” It’s a careful, thoughtful accrual of exactly what all an honest man can take in while carrying on. It’s a difficult book to read, though not because it’s hard to pay attention to, or hard to follow—t’s actually delightful, line by line—but because the structure of the book forces the reader into the same position as the narrator: because there are no breaks or refrains, you have to take what you read and carry it with you, forward, into the future and into meaning.

To circle back to my initial questions, Wu He’s Remains of Life is historical fiction, though it doesn’t function remotely like any I’ve read before. It certainly deals with history. It’s a way to start thinking about it, at least. But the reason it should win the Best Translated Book Award isn’t that it’s great historical fiction, it’s that it’s decisively present fiction in a way that no other book I’ve read is. The overlapping layers of consciousness and threads of story serve to collectively mirror back a life; a man, heartbroken, does not so much investigate as he does accrue. He has freewheeling conversations with everyone he encounters because he wants to know more, and they have conversations with him because he listens. He gathers. He adds to himself without reducing the people around him. Their existences are also true. The past becomes both more and less clear. He meditates. He’s trying to understand a number of things, but he doesn’t know if that’s possible, or even predict how he might go about accomplishing understanding. He meditates. He’s content to just try. He carries forward into his own ever-changing Remains of Life. So he goes on, his eyes, his ears, and his heart all wide open, available for whatever happens in the next conversation, or on the next line.


Previous post
“Before Lyricism” by Eleni Vakalo [Why This Book Should Win]
Next post
The End (Part VIII, IX, Epilogue, Pgs 237-281)