“Things That Happen” by Bhaskar Chakrabart [Why This Book Should Win]

Today’s entry from the BTBA poetry longlist is from writer and translator Tess Lewis, who also has a title longlisted on the fiction side of things. 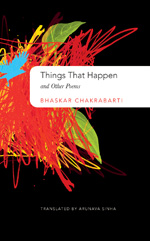 I love ordinariness. Rejected, pedestrian conversations and scenes, days and nights left behind are all things that move me. And I feel a desire to dress them in new clothes. Perhaps I wanted to capture an enormous pleasure in my poetry . . .

The city of Calcutta is constant presence in Bhaskar Chakrabarti’s poetry, although an elusive and ghostly one. Chakrabarti is every bit the city poet that Baudelaire is, but he wends his way through his beloved metropolis as a swimmer rather than a flâneur. In some poems he merely dips a toe into the stream that swirls around and past him. In others he submerges himself fully and lets himself be carried by the current. In still others he sits on the bank, his back to the city, and looks inward or simply remembers. The Calcutta Chakrabarti evokes and celebrates is not, however, the one we have often heard or read about elsewhere. There is little sign of the bustling streets filled with life and affliction, the faded grandeur offset by vivid colors and heady Coffee House intellectuals usually associated with this city of many goddesses and cultures. Chakrabarti’s Calcutta is a city of memories and particulars, of loneliness and melancholy, of beautiful women glimpsed from a distance and fleeting deities.

For Chakrabarti (1945–2005), there is little point in looking for the exotic half-way around the world or even in nearby neighborhoods. The crucial thing is to find a connection to the mundane, the familiar; “even writing four or five ordinary lines / About tender blades of grass is better” than “struggling on with symbol, imagery and resonance” in poems from the day before yesterday. Observed with the proper attention, the foreign becomes familiar and the familiar is seen fresh.

Arunava Sinha’s translation from the Bengali deftly navigates these poems’ shifts in register from elevated reflection to earthy exclamation. In the title poem, the poet reflects on the small but real joys a life dedicated to art can bring, yet quickly deflates the swelling sentimentality.

The days aren’t passing badly for the two of us
Though it’s true we haven’t been to the hills,
We haven’t been to the seaside for three years now
And poverty, it’s no small annoyance
Constantly borrowing money and asking my sister for help
Still, one or two interesting things do happen
Tonight, for instance, you exclaimed: There, it’s raining:
We went up to the window
But it was only the sound of someone pissing on the roof next door
Or the other night, I was writing in the tiny room
With the light on—someone from the street said loudly:
Go to sleep, motherfucker.

Most of the poems in this collection, however, are in a more reflective tone of sober nostalgia. Indeed, many were written after Chakrabarti began treatment for an illness that brought him frequent hospitalization and regular confrontations with mortality. Sinha’s sonorous, sinuous lines evoke the elusive comforts Chakrabarti finds in poetry that calls up, however futilely, absent beloveds and lost familiars.

Because you’ll come, I’ve snagged a wicker chair
I wonder, will you come? Will you really come?
Two decades have passed—or four? I still sit in the darkness
Why this loneliness, why this pulse in my veins
You are mild (fragrant air), peace, peace in my nerves, panacea

“The Language of Giraffes”

Readers of Things That Happen are quickly swept up by the soothing, inviting flow of Chakrabarti’s poetry, but sooner or later a gentle tug of danger even despair between the lines will send them back to firm ground, unsettled but with senses sharpened.


Previous post
The End (Part VIII, IX, Epilogue, Pgs 237-281)
Next post
“Affections” by Rodrigo Hasbún [Why This Book Should Win]