Why Are Ebooks [Let’s Talk about Catalonia]

Just like with last week’s post, I want to kick off this mini-survey of a couple Catalan titles with a chart of the presses who have brought out the most Catalan translations (according to the Translation Database): 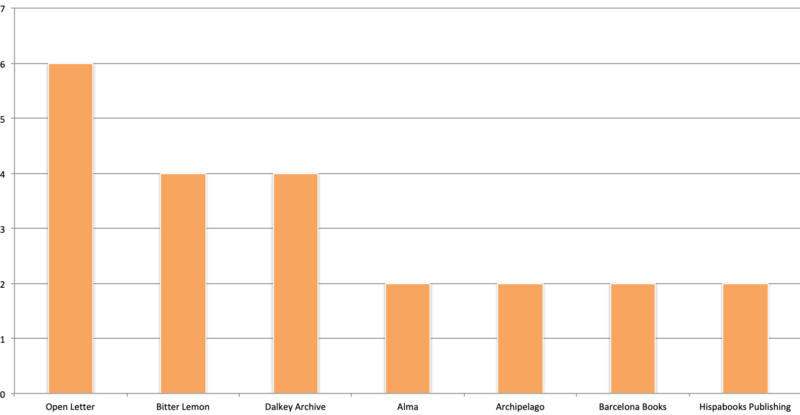 My first response is: Thank god I finally realized how easy it is to change the color on these charts! I was getting so sick of blue. And besides, this is a nice Open Letter orange, which . . . hey, look at that! We’re number one!

I could be wrong, but I think this is one of two languages that we have published more translations from than anyone else. The other? Bulgarian. For sure. (We’re close on Iceland, but AmazonCrossing did ten titles one year and is crushing us.)

This chart is totally flawed.

I figured it out about five minutes before I started writing this post, and although I’m usually up for doing a couple hours of extra research to make sure all my numbers are accurate before posting them, I just don’t have it in me tonight to deal with this bullshit.

Let me explain via the “funny/rant” section of these weekly posts:

Have you heard of Barcelona Books?

Yeah, so, I kind of remember them from a long time ago. January 2013 to be exact. Back when Obama was starting his second term and the world wasn’t a complete garbage fire.

What is Barcelona Books? GOOD QUESTION. It’s a “publisher” of ebooks that are distributed through Open Road Media. So far, so good. I mean, of all the ebook only publisher/distributor/media 2.0 companies out there, Open Road has to be the most (only?) successful one.

But how many of you have heard of Barcelona Books?

Given how the Open Road website is set up (BE SWEET CHAD, NOT SALTY, DON’T SHIT ON THEIR WEB DESIGN THIS SITE IS NOT ANY BETTER), I can’t link to a Barcelona Books page, but I can share a screen cap:

There are 22 titles total listed on this page, and given the name of the press—not to mention it’s location (Barcelona)—I assume these are are in translation . . . from Catalan. Although that could be totally wrong. Barcelona has a very healthy population of amazing authors who write in Spanish. So, who knows? Let’s see what’s behind A Barcelona Heiress: 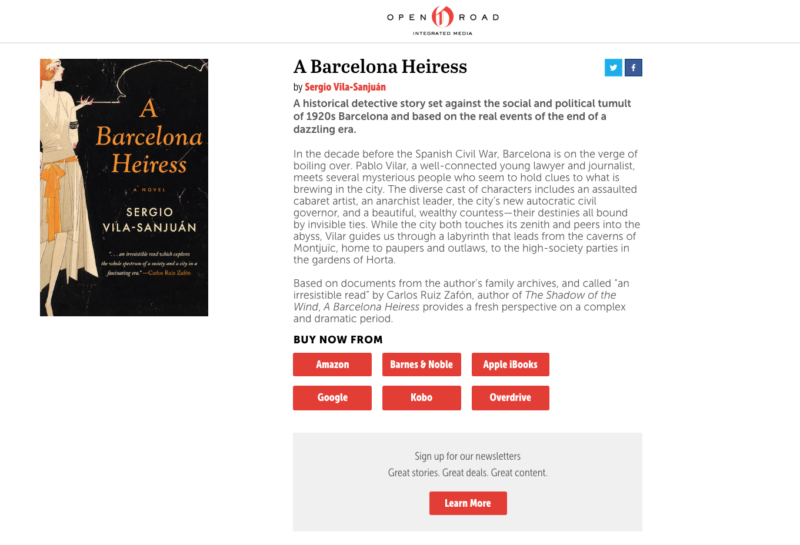 Carlos Ruiz Zafon blurb aside, I’m intrigued! But who translated this? I’ll just click on that Amazon link . . . 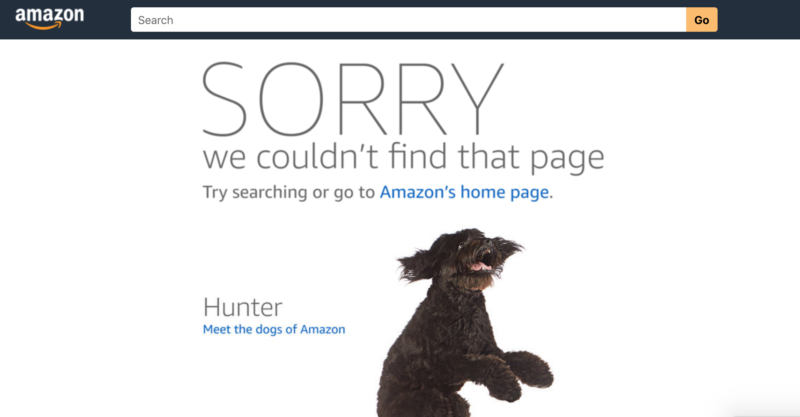 OK, back to square one.

Let’s check out the second book listed here, An American in Barcelona. 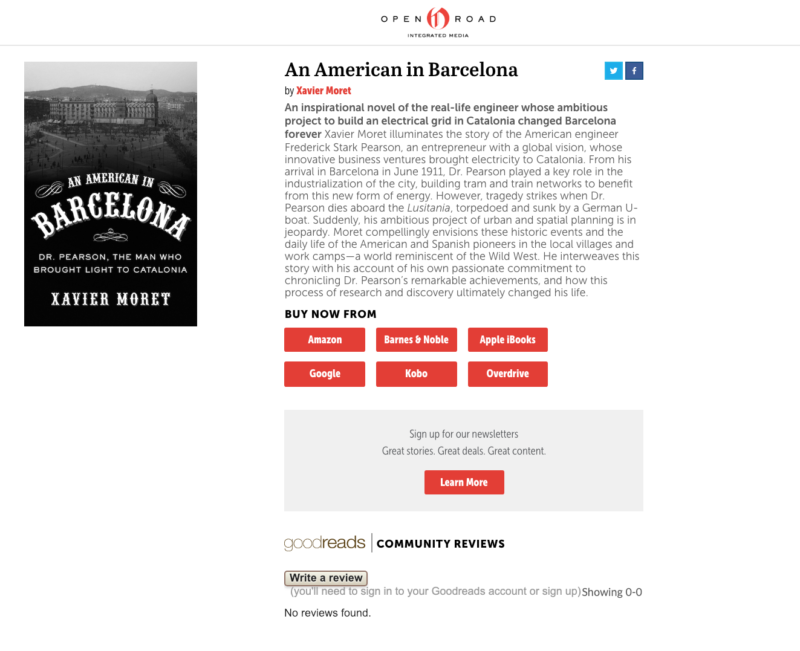 Again, cool cool. I’m reading/listening to Pynchon’s Against the Day, so I’m way into books about electricity. (Which is a joke for all four Pynchonites who read this blog. It’s like when I tell Rochesterians that my Crying of Lot 49 tattoo is about “the mail.”) But is this translated?

Thank GOD there are no more dogs! BUT. BUT BUT BUT. If Open Road Media’s number one claim to fame is that they excel at creating metadata for ebooks (trust me, this is their bread and their butter), then why no translator? Again, not trying to be salty, but c’mon. It’s 2019 and you’re Barcelona Books. Sure, Penguin doesn’t want you to know that Leila Slimani’s latest potboiler is translated (SCANDAL!) but who gives a shit in this instance? Again, you’re from BARCELONA. Own it. 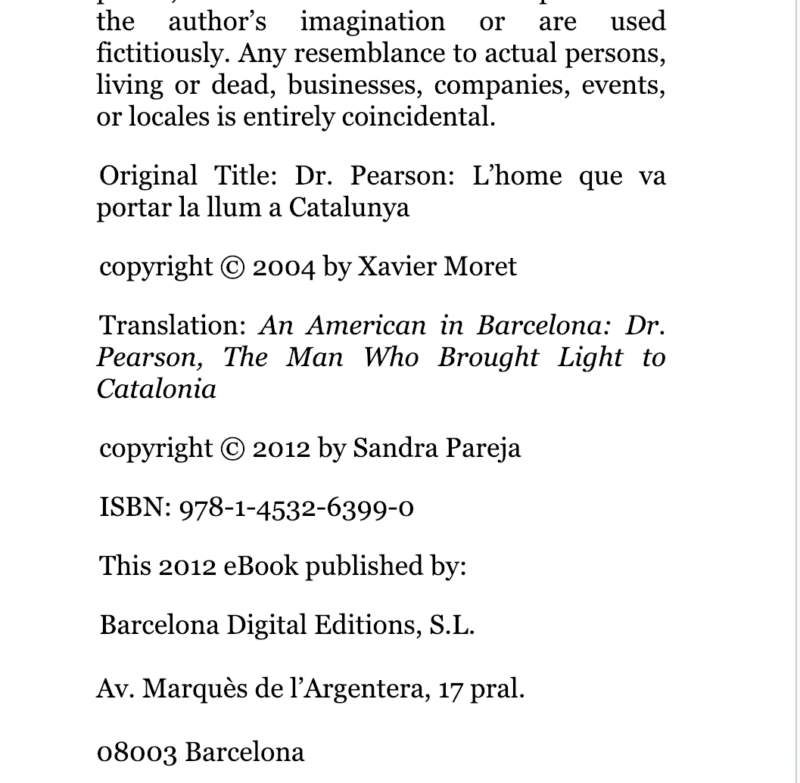 Wait a second. My friend Sandra Pareja, one of like three agents who I actually like (yes, I’m including you in that count) translated this?

Two notes: 1) unless you know a bit about Catalan, you might not know that this was originally translated from Catalan. And 2) why not “Translation copyright (c) 2012 by Sandra Pareja.”

This is all weird. And frustrating.

Those twenty-two books on the Open Road website? Neither of the ones currently in the Translation Database are included. But this list of twenty-two titles includes three (plus a box set) of books by Noah Gordon, which, to the best of my research, have not been translated. This is a nightmare of research for another day. For now, let’s admit that the chart above is flawed, and that it’s at least likely that Barcelona Books has brought more books to market than any other publisher . . . but have they? If no one hears of an ebook (An American in Barcelona is “#1,240,531 Paid in Kindle Store,” which, even by my standards, sucks) has it really been published?

That’s actually a good topic for another weekly post . . . What differentiates “printing a book” (like vanity publishing) and “publishing a book.” There’s a story that I’ll likely never tell about how Open Letter almost didn’t come into existence until I argued this differentiation vociferously late one snowy Sunday night to someone much my senior who, in a way, held my future in his hands.

It’s one of the troublesome contradictions of the Translation Database: We want to collect all the data, and yet, that includes books that are “made available,” but hardly published. And yet, it’s sometimes hard to discern what’s “simply printed” and what is “ignored by the powers that be.”

And where do ebook-only publishers figure into this continuum in 2019? I’ve never heard of a single one of these books, and I’m willing to bet that #BooksellerTwitter hasn’t either. And I “follow” people who read the most obscure titles. Who aren’t swayed by the Big Five and would be deeply into the niche publisher specializing in things like this.

In other words—and yes, this is my professional attempt at a segue—was Miquel Bauça’s The Siege in the Room published and ignored, or printed with no intention of garnering attention? 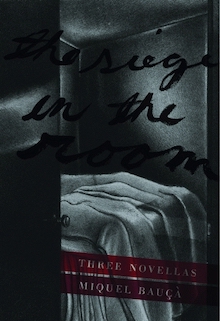 The Siege in the Room: Three Novellas by Miquel Bauçà, translated from the Catalan by Martha Tennent (Dalkey Archive Press)

I know, I know, I’ve been writing a lot about Dalkey Archive. Maybe it’s a mid-life crisis (what would’ve happened had I never left and Open Letter never came into existence?) or maybe it’s because I’m trying to find really great books from around the world to read—irrespective of “hipness” (aka Twitter references) or how recently they were published—and Dalkey is rather loaded in that regard. They have some titles that might raise eyebrows, but if you drill down to the core, John O’Brien’s taste is really interesting. There are so many books that blow away the most cynical of readers that no other publishing house in America would consider.

I remember learning about him on my first trip to Barcelona (first of two, although if I could live in Catalunya at some point . . . I would be in my own personal heaven), mostly because he had died “sometime around Christmas Day 2004,” a date that’s inexact for reasons that Martha Tennent explains in her introduction:

The iconic status that Bauçà came to hold among certain Catalan literati would perhaps have caused him to sneer, for above all he wished to be an anonymous, invisible writer. The relative obscurity of his work went hand in hand with his self-imposed ostracism (in a letter written in 1995 he referred to himself as “an apartment hermit”) in the tradition of literary exiles such as J.D. Salinger or Thomas Pynchon.

As morbid as it might be, I’m intrigued by this. We live in a world in which people are desperate to tell you about what they ate for lunch, or thought about while taking a shit, so someone who just doesn’t want to deal with the circus of being a public being? It’s stupidly refreshing.

I had two schemes in mind for this post when I started: To look at Dalkey’s “Catalan Literature Series” and the Open Letter one (past, present, and future) to see the similarities (emphasis on classic text and humorous ones), what succeeded and didn’t, and plug the new Quim Monzó collection (which BLEW ME AWAY, and which I think is one of the best story collections of 2019, hands down), or, alternatively, to look a bit deeper at The Siege in the Room and play the old game of “If you like X, You’ll Like Bauçà.”

Like usual, I’m going to shy away from promoting our own books right now—but seriously, in a single year, we have Camellia Street and Garden by the Sea by Mercè Rodoreda and the new book by Quim Monzó (still debating the title), which is untouchable in terms of sheer quality—and spend some more time with the Bauçà.

Maybe the world hasn’t always been sad. When we say our words are dragged down by inertia, we mean that what we learn as a pup stays with us. The same applies to other things. Girls, for example, use the phone but don’t know its precise function. (“Carrer Marsala”)

It’s hard to pull a quote for this comparison, but the atmosphere of the two books is very much in line. The Bauçà narrator is besieged by the world, much like Tómas Jónsson. Everything’s worse than it used to be—especially for him.

This is suggested in Martha Tennent’s introduction, and although Bauçà isn’t as radically stark, it’s definitely apt.

I remember that I came to the building in search of a sedative—if not a remedy—for the malady that had befallen me so cruelly some time before. My disquiet was so great that no one could comprehend the depths of the despondency I suffered. No ray of light fell across the shadowy abss. I had not yet hung up my had when I heard the sound of rapid panting from the multitude of wretches striding about on the landing upstairs, showing each other, anxious to drag me into the filth of their own despair. (“The Old Man”)

There are definitely more Beckettian passages than that one, but I decided not to mark up this library book as I read it. But on the whole, the sort of “writer writing their existence” vibe runs throughout. Although by contrast, where Beckett blends absurd humor with existential despair, Bauçà is more someone who complains, less philosophical and obsessed with the concept of writing, and more just annoyed at life.

There’s nothing quite as directly anti-Catalonia in Bauçà as there is anti-Austrian in Bernhard, but there is a bit of that disgusted riffing that a lot of readers (myself included) really like about Bernhard.

What’s the warden up to in her pajamas and bathrobe? Has she again fallen into her intermittent, intemperate whisperings? She gets drunk and goes out early in the morning to expose herself to the anger of those tubby boys who, instead of going to school, romp through the pine needles. If you stop to think about it, what else could she do? Associate herself with a portrait painter, ready to wash his shirts if necessary? That business wouldn’t last long.

I couldn’t find more than this review of The Siege in the Room, which, when I started reading this collection bugged me to no end. This book is right down the middle of the plate for so many people I follow who love to Tweet about interesting books.

And then, I found this. And this? It’s exactly where this post should end. A NONSENSE YOUTUBE VIDEO WITH TWO TOTAL VIEWS! This is promotional gold . . . or something.