Bricks and Mortar [Why This Book Should Win]

Tony Messenger is an Australian writer, critic and interviewer who has had works published in Overland Literary Journal, Southerly Journal, Mascara Literary Review, Burning House Press, and Concrescence Online. He blogs about translated fiction and interviews Australian poets at Messenger’s Booker and can be found on Twitter @messy_tony. 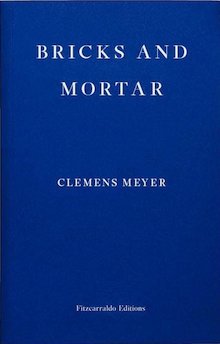 Bricks and Mortar by Clemens Meyer, translated from the German by Katy Derbyshire (Fitzcarraldo Editions)

“Lack of conciseness and verbosity were according to Goethe the besetting sin of German writers of the middle of the eighteenth century, and it is a fault to which German writers have always been peculiarly liable,” so writes John Albrecht Walz, in his 1914 essay about “The Life of Gottfried Keller.” The English-speaking readers may also be less inclined to adapt to dark and foreboding tales: most recognizable of the Brothers Grimm fairy tales would be “Little Red Riding Hood,” “Hansel and Gretel,” and “Snow White,” the bleak tales being less popular.

Bricks and Mortar has received little commercial coverage despite its Man Booker International Prize longlisting in 2017 and winning the prestigious Bremer Literaturpreis in 2014. The publisher, Fizcarraldo Editions, contacted me a few years ago to see if I was planning on a review, as a member of the 2017 Man Booker International Prize Shadow Jury. I was the only person who had read it when the longlist was announced, and mainstream reviews have been very thin on the ground. Unjustified, in my humble opinion, but then again maybe readers would prefer nice happy endings?!? 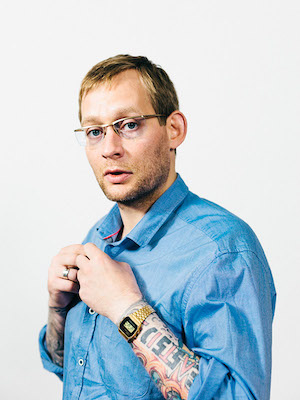 Early in Clemens Meyer’s Bricks and Mortar there is a reference to the Brothers Grimm story “Mother Trudy,” in which an inquisitive girl who disobeys her parent’s instructions meets a witch, is turned into a log of wood, and thrown onto the fire, and the novel picks up the threads of these darker tales and represents them in the reality of modern Germany, from the period just prior to the fall of the Berlin Wall to (possibly) the current day. But the tale of a developing, changing Germany is told through the eyes of the sex industry. Can “Little Red Riding Hood” be linked to the “red light industry”? Is “Mother Trudy,” recalled by our first narrator, a sex-worker, a metaphor for all female sex-workers?

And Clemens Meyer’s novel is no short fairy tale, running to 653 pages, it is a long work indeed.

The characters blur, the dead talk, people take the lead role and then move back into the shadows, time is not linear, we have one character talking about 9/11 and it is 1999!!! Told in a multitude of voices, you are not always certain who is the narrator, nor their role in this kaleidoscope. Rest assured things do draw together the further you travel into this melting pot.

An exploration of capitalism, economies, a unified Germany (and sex), this book, at no stage enters cliché mode: a football hooligan becomes a landlord for the apartments used by the prostitutes gives economic rants about the number of workers, the rooms, euros and then refers to Stanisław Lem’s Solaris. An alcoholic ex-jockey spends his nights looking for his young daughter who has become a street worker. A policeman works on a cold case of three bodies found in the bottom of a peat bog.

Uppers, downers, alcohol, tobacco, and Viagra, each scene the language and style mirrors the drug of choice, with sentences lingering or rapid and short, moving from 1st to 2nd to 3rd person, each scene descends or ascends holding a mirror to a seedy existence. It can be pacy or languid, a hallucinogenic romp, but there is hardly any color here, it’s all shadows nightclubs, swamps and dark lands. Given the plethora of styles, Katy Derbyshire’s translation deftly presents the foreboding exploitation and slips seamlessly from voice to voice.

As Meyer says himself, this is an “unorganized flow” (should that read “disorganized flow”?), you need to allow the language, the mood, the environment of each section, voice, character to simply sink in, there is no point in over analysis:

A park opposite. Snow on the trees, towers behind the park, behind the trees, far away or very close by, the distances change, tower blocks connected by bridges, corridors of glass, A temple-like low building with a curved roof among the white and green of the park, for the trees aren’t bare, winter in this city, but days, you remember them now, that smelled of spring, the air suddenly mild and the sky clear, no grey any more from which the snow fell wet on your face, but then another icy gust of wind that grabbed you on your paths through the night, on your way along the neon alleys, along the river, across empty parks like small woods, where are you going? And what are you looking for?

Each section (chapter?) has a reference to “bricks and mortar,” in various guises, nicknames, buildings, retaining walls, realigning a river’s flow, stability, and the real estate industry. The juxtaposition of Communism/Capitalism is subtle throughout, likely due to the blurring timelines, but it is the one constant subplo 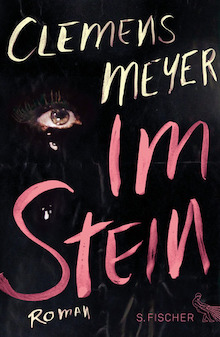 t, at times is can be a little more blatantly pointed out as in: “There was always plenty to see on International Worker’s Day at the racetrack, on the terrace with bubbly and finger food.”

A bleak fairy tale of a unified Germany, where the real estate industry is split by “Angels” and “the firm,” this novel reveals a sector that either boomed or plummeted depending upon what side of the wall you came from, and whether you were the exploited or the exploiter. In its many styles, this is a complicated and many-layered work, with sub-plots aplenty, that ex-jockey’s child prostitute daughter, those bodies in the bog, diamond smuggling, to list just a few. There is reference to the Prostitution Act of 2002 and the changes that brought into place, although the one (slight) failing I found with the book is that the female characters appear more as meat or commodities rather than human, with the male characters getting more depth to their motivations and behaviors. That this may be slight is because it may be an intentional portrayal as in the industry they are forever changing and are treated in that manner.

A book that is not for the faint-hearted, it contains numerous descriptions of sexual perversions, however not without context and not in any way gratuitous. As I mentioned before this is not a clichéd work, instead a many-leveled construction, all mixed up, hallucinogenic style. Throw in a hint of dreams, a cemetery, a crematorium, even Japanese scenery, and you’ve only scratched the surface of Clemens Meyer’s novel that was also shortlisted for the 2013 German Book Prize. Keeping the tradition of German fairy tales, this is a dark, dark fairy tale, why not throw another young girl on the fire the brighten things up?


Previous post
Season Eight of the Two Month Review: CODEX 1962 by Sjón
Next post
The Man Between [Genre of the Month]