I’m on a self-imposed hiatus from writing posts for this site until I finish two other articles for other publications (almost done!), but I am lifting this restriction for one post to share the next set of answers from Damion Searls in my (probably never-ending) interview with him about Uwe Johnson’s Anniversaries.

To set this up, you might want to read Part I and/or this write-up about the first of the four parts of the massive novel.

If you don’t feel like reading either of those, here’s what you need to know about Anniversaries before reading Damion’s responses: Anniversaries centers on Gesine Cresspahl, a young mother living in New York in 1967 with her daughter, Marie. Using a diary format, she recounts their life in NYC while also explaining the history of her family back in Eastern Germany in the build-up to World War II. The diary entries range from recaps of what was in the New York Times that day to long stories to Marie about Germany to short anecdotes about their trips to Staten Island and the like.

I think that’s all you need to know. Probably. These questions are kind of in the weeds, but I think you’ll find them interesting—even if you haven’t read the book.

Chad W. Post: One thing that struck me in reading the first volume of the book was Marie’s age. She’s supposed to be 10, but does a lot of things—exploring the new subway lines on her own, doing a lot of shopping alone, very politically aware (which doesn’t seem too out of keeping with her age)—that don’t really seem age appropriate. (I barely trust my eleven-year-old to change his underwear on a daily basis.) Times were different, I suppose? Or, what occurred to me as I started reading this second part, was that Gesine is the one describing Marie’s action. And in both a conversation with Marie about Robert Papenbrock and one of the internal ones with Jacob, Gesine acknowledges either leaving out particular information or refashioning it for the story. So maybe this is Marie as being told to us by Gesine? And not Marie a very-realistic-depiction-of-a-10-year-old-in-1967? I don’t necessarily have a question about this, except that I wonder if the “believability” of Marie’s age struck you at all as you read/translated? 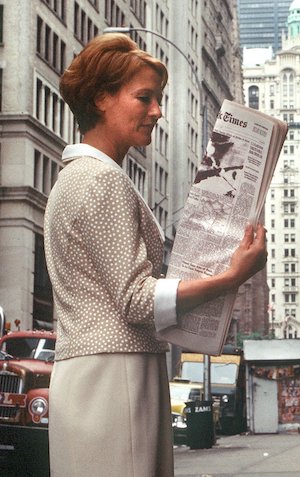 Damion Searls: Marie as a precocious child is one of the things that strike most readers of the novel. As a very eminent realist novelist commented to me over email (in private, so I won’t say who it is), precocious kid characters are really hard to pull off, in novels or movies, but when it works they’re amazing, and Johnson really nails it, in this writer’s opinion and in mine.

What Marie does is certainly different from children today, for instance in the great chapter where she explores the new NYC subway lines on her own, but I have to say that I was a child in New York not too long after her, in the 70s, and I took the subway by myself at age six or seven, for example, so I don’t think it’s that unrealistic.

Probably more interesting is what these aspects of Marie’s personality say about her character. I mean think about it: she has no father, minimal to no extended family, she moved to a new country speaking a foreign language at age 3—she has had NO ONE in the world except Gesine, and has obviously adapted accordingly. Naturally she’s going to be independent, with interesting things to say about intellectual topics, someone who pleases adults, and so on.

It’s smart of you to think about the fact that Gesine is shaping the presentation (the way she also, of course, shapes the child by being her mother!). There’s an incredible chapter you’ll get to soon where Gesine suddenly asks Marie: So, what do you think of my family? and Marie gives her take, and we suddenly realize that the whole third-person novel we’ve been getting about Germany is a first-person story after all, shaped by Gesine. As the book goes on, especially near the beginning of Part 3, there’s an increasingly clear story arc of Marie’s growing confidence and self-awareness: she is more and more able to challenge Gesine and is slowly getting closer to adolescent rebellions.

CWP: Another thing I’m obsessed with right now (and/or have been for ages) are various patterns in narrative structure. Anniversaries basically declares its cyclical structure in both title and diary structure. There’s also the parallel between the advent of World War II and the ongoing Vietnam War in a “history repeats itself” style. But what particular draws me to this book, so far, is how time is represented in the two-plus narrative styles. There’s: 1) the faster moving Germany sections in which years pass, and time elapses between visits to that storyline; 2) the daily occurrences reported in the New York Times and relayed in a factual, of-the-moment fashion; and 3) Gesine’s accounts of their days, which are in between the two in terms of narrative compression. What I’m more curious about—and in part because of your comment that this was initially intended to be a trilogy, which you can see in the three water scenes—is is there is another level of organization that a first-time reader might not pick up on. Like the three water scenes that open books I, II, and III, but not IV, or more subtle things about how frequently certain settings/situations/characters recur. A more simply way to ask all this: Are there other markers I should be noting as I read through this the first time?

DS: The swimming scenes are the most apparent markers—there are a few others I know about (e.g., one all-New York Times chapter per part), but I don’t think they’re very important to readers, or to me as a translator. I think that’s one of the strengths of the book, actually. Compared to, say, Dante, where every little piece fits together into this giant system, or Proust, which gets so much of the big picture into every little detail—practically any pair of adjectives describing any noun in the book is the whole polarity and structure of the Proustian universe in microcosm—Anniversaries is much looser. There is an openness to different kinds of material, new ways of telling the story, the book is actually very playful and moves more unpredictably.

And in any case, the structure changes and kind of falls apart in part 3, which turned into parts 3-4—the balance between the storylines shifts, which is why those months got so much longer.

CWP: Silly technical translation question: Did you refer to any of the actual NY Times articles when translating those bits? 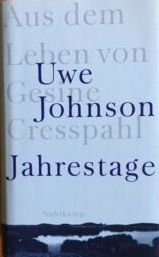 DS: Absolutely, of course. Sometimes Johnson/Gesine is directly quoting Times articles (translating them into German), so I wasn’t going to try to reverse-engineer the English; more often, Gesine is filtering the Times, emphasizing or being sarcastic about various bits, and so I would refer to the English, decide where I thought Gesine was changing the article instead of just translating it, and then morph the English to match. Plus the language was just different then than it is now: the still-new term “teen-ager” was hyphenated; they referred to “Negro” issues, of course, including “racial disorders” instead of unrest or violence; Vietnamese place names were spelled differently; the whole tone was slightly different. Things brings in good sixties texture. I was sometimes sad to lose some of the nuance or humor in Johnson’s translations—for example, the informer explaining drug slang to the Times saying “Geschwindigkeit ist tödlich,” i.e., “Rapidity is deadly,” as Johnson’s very German translation for “Speed kills”: I think that’s funny and I tried to think of a way to keep it in without it being too obtrusive, but eventually I let it go.

CWP: There is so much violence permeating this book—the Times reports, the mafia section in book I (which was the weirdest bit to me), the wars—and yet there’s such a sense of calmness to this book. Part of that, I think, is due to the tight focus on the characters as characters, but there are other craft things that keep the violence as a sort of lurking backdrop rather than the sole focus. Not sure if you’d agree with me, or if I could properly articulate all those techniques (the pastoral depictions of Jerichow that accompany the changing social situation, Marie’s seeming invulnerability giving the reader a sense of security, the switch to more domestic interests like marriage after chapters of more upheaval), but I wondered if this informed your writing of the text. If there were particular words or phrasings that you avoided or tones you leaned into in order to maintain this tension. 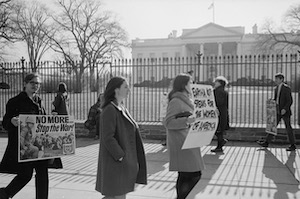 DS: That’s a perceptive and sensitive way to put it—I hadn’t thought of it quite that way. I agree that Johnson’s lyricism and sensitivity to nature (sunsets, rivers, light and water) are crucial and beautiful counterpoints to the brutal history. Marie is certainly confident, but it’s hard for us as adults to have faith in her own sense of invulnerability, so that doesn’t feel safe and secure to me. I tend to think more about Gesine’s pretty strong defense mechanisms, her ways of trying to keep experience and history at least partly under control, so I don’t think of it as calm, exactly. The more outwardly cool she is, the more turmoil and horror she’s trying to keep at bay.

Johnson, a bit like Gesine, almost-suppresses a lot: he writes in a very slanting and sometimes cryptic German, where it’s not always obvious what’s going on and a tiny little nuance is all he gives the reader to figure it out with. This is like life, of course, where we have to interpret people from occasional encounters and glancing gestures.

In terms of the tone, that’s what I was thinking about most: compression, rapidity, little sharp details that open up into much wider meanings but don’t spell everything out. Which is hard as a translator, because I have to figure it out and then compress it down again—unpack everything and then “repack” it, you might say. My best example of this comes in Part 4—ask me about it then if you’re still interested!