Interview with Damion Searls about Anniversaries [Part I]

Assuming that I’ll be reading Anniversaries slowly but surely over the next four months, I thought it would be fun to talk to translator Damion Searls about the book along the way. If all goes according to plan, these monthly installments will develop into a rich conversation about the book, translation issues, and much more. To get things started though, I asked Damion a few general questions to lay the groundwork about this gigantic project.

Chad W. Post: How did you first come to Uwe Johnson’s work? 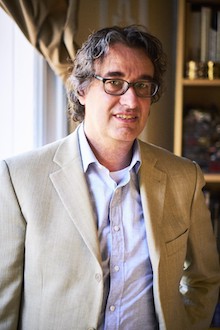 Damion Searls: He wrote a book in homage to his friend, the great Austrian writer Ingeborg Bachmann, after she died tragically young in 1973—I was and am a huge fan of hers so that was how I first discovered Johnson. Bachmann’s Letters to Felician and Johnson’s book about her, A Trip to Klagenfurt, would be the first two books I translated. But when I found out he had written a four-volume novel that takes place three blocks away from where I grew up in New York City, of course I had to read that.

CWP: This is a super mundane question, but given that I’m planning on spending the better portion of four months reading this book, I’m curious how long it took you to translate it all.

DS: I first read it—it took me about a year—some 25 years ago, which is halfway between now and the events of the story. I translated a couple of chapter/days back in the 90s, but the main part of the work was in 2013–18, during which I also wrote a book and translated a lot of other things. I usually say it took me 2 years to translate over the course of about 5 years, but that’s aside from the 20 years of lead time.

CWP: What’s the full story behind the first version of Anniversaries in English? I know it was abridged, came out in a weird way with multiple translators, and has been out of print for quite some time. But why was it abridged? Were the cuts motivated by the publisher to try and reach a wider audience? Or by the author/translators? 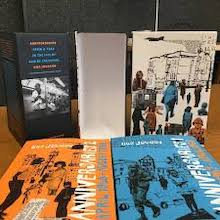 DS: So in German the book was originally going to be a trilogy, which is why Parts 1 and 2 cover four months each. The first four months were published in 1970—fast! really soon after 1967–68!—and then the second four months came out in 1971—also fast!—and the last four months was announced for 1972. But then Johnson got stuck, putting off Part 3 until 1973 and eventually publishing only half of the last third then, as the current Part 3. Life crises and creative crises and health problems meant that Part 4, the last two months of Gesine’s year, wasn’t finished until 1983.

There are internal signs of the book’s tripartite structure still in there, for example every part begins with a swimming scene but Part 4, i.e. the second half of “Part 3,” doesn’t.

Johnson was forced to drastically abridge the book for the English translation, and did, which is why it’s sometimes said the abridgement was “with his blessing”; it wasn’t totally voluntary though. Leila Vennewitz translated the abridged first six months (abridged Part 1 + abridged first half of Part 2) and that came out in 1975; she went ahead with the next four months (half of abridged Part 2, all of abridged Part 3), then had to wait, and died before Johnson published Part 4 in 1983. They brought in Walter Arndt to translate the abridged Part 4, and that was included with the rest of Vennewitz’s work as the second half of the two-volume Anniversaries in English, published in 1987. By that time, Vennewitz’s first half was long since forgotten; I wonder if anyone made their way through the second half of the English.

Aside from the heavy cuts, which really change everything, Vennewitz’s translation is also flawed in other ways, though it’s not my place to go into that in detail. Arndt kind of phoned his part in, I have to say, though you can’t blame him. When I proposed translating the rest of Anniversaries and splicing it into the existing translation, Edwin Frank, the editor of NYRB, read the earlier one and said no, it doesn’t work, you need to do the whole thing.

CWP: Putting aside the issue of time, what are the other main challenges in translating a book of this magnitude? And how much did you rely on the earlier translation? 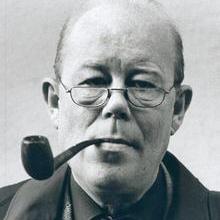 DS: I didn’t rely on it, but I certainly referred to it; Vennewitz also had the advantage of translating while Johnson was alive, so there is some correspondence between them about tricky translation problems in the book. I was glad to have his answers to her questions. The book is very canonical in German, so there are books and books of secondary literature on it too; there’s a giant line-by-line commentary, also available online, that gives all the references and everything like that.

That said, as I’ve written elsewhere, it’s the slowest, hardest book I’ve ever translated, not because of the references or because the novel is a difficult readerly experience, if anything because it isn’t. It’s quick and sharp and fluid, but that means you have to be really on the ball as a translator and find ways to keep the narrative moving, so it doesn’t get sluggish and turgid.  (We can maybe talk about some examples once you get farther into the book?) One of the really helpful edits I got from Edwin Frank was encouraging me to use a lot more contractions (“couldn’t” or “it’s” or “aren’t”), which translations from German often underuse because there aren’t contractions in German, so if you’re not really thinking about it, a two-word translation (“could not,” “it is”) is the easy way to go. And yet contractions really keep things moving in normal English—this paragraph has eight of them. Not using them is part of what can make translations from German feel heavy, or in a worst case sound robotic.

As for the length of the book, those difficulties were mostly logistical, about funding and carving out enough time to do it. NYRB could take on the project only once I’d gotten quite a lot of funding from elsewhere: a Guggenheim, the Cullman Center, a multiyear grant from the Goethe Institut.

CWP: It’s been a decade since I read any Uwe Johnson books, but in my memory, Speculations about Jakob and Two Views are pretty . . . experimental, for lack of a better word. What struck me in starting Anniversaries was that, from a simple reader’s perspective, it’s pretty easy to fall right into. I’m not sure if it’s because of the primary setting (NYC), the way the NY Times bits grounds the time period, or the mostly straightforward switches between Gesine’s life in NYC and that of her parents, but, so far at least, this is far less “work” than I would’ve expected going in. Is there anything you’d say to readers out there who might be intimidated to start this? Any background info that’s particularly useful to approaching this book?

DS: I really think Anniversaries feels much more contemporary and vivid and relatable than the other big masterpieces, Ulysses and Proust and The Man without Qualities and even Tolstoy. You’re right, Johnson’s earlier books are more difficult, arguably unnecessarily difficult. You’re not wrong to be put off from them, especially in the existing translations. Anniversaries, on the other hand, is a joy. There are several reasons for this: Johnson was more mature when he wrote it; the story is, as you say, firmly grounded in the great character of Gesine and her daughter and the concrete situation of NYC and each date; and I do think it helps that the book is translated better than his earlier novels, keeping it more quick and alive. 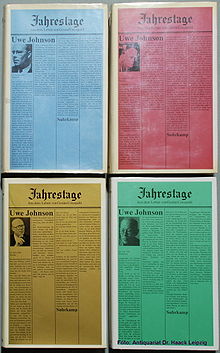 The book is about someone living in the sixties and living with the legacy of the past, so there’s a lot of historical information in the book, but Johnson’s a great writer and a storyteller so he always gives the reader whatever they need. I think reviewers have sometimes made the book sound like a giant, daunting piece of grad-school homework—and maybe the publication as a big black box set of two big volumes makes it look intimidating—but it really isn’t. People like the book! It’s a story, with incredibly beautiful writing! It’s the same length as the Ferrante series, which was also published in four volumes, and no one complains that that’s too long (never mind Game of Thrones!). Also, the chapters of Anniversaries tend to be short, three or four pages long (there are just a lot of them); each new chapter bounces the different storylines off each other in a new way, so it’s more of a page-turner than you might expect. You’re reading about Germany and eager to get back to New York, then reading about New York and can’t wait to hear what’s happening to Gesine’s parents in Germany, and Johnson keeps it going for all those hundreds of pages.

One response to “Interview with Damion Searls about Anniversaries [Part I]”