Öræfi: The Wasteland [Why This Book Should Win]

Keaton Patterson buys books for a living at Brazos Bookstore in Houston, Texas. Follow him on Twitter @Tex_Ulysses. 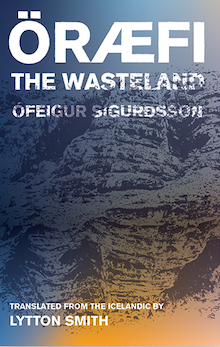 Öræfi: The Wasteland by Ófeigur Sigurdsson, translated from the Icelandic by Lytton Smith (Iceland, Deep Vellum)

Why should Ófeigur Sigurðsson’s Öræfi: The Wasteland win the 2019 Best Translated Book Award for fiction? To start, it’ll be easier to go over all the reasons it shouldn’t win. It’s too absurd. Too funny. Too outlandish. Too wrapped up in the mythology of its own making. There’s too much about Viking sagas, penis amputation, Icelandic goats, natural disasters, and most importantly it goes on and on about the virtues of death metal. All of this is couched in a complex, densely nested narrative structure that removes the reader from the truth by no fewer than three degrees. But all these reasons are actually beside the point. Öræfi should win the 2019 BTBA, because it really just doesn’t give a fuck whether it wins or not. It is a novel that exists solely by its own volition. It is a fictional force of nature that claimed every single literary award Iceland—quite possibly the most literary country per capita on the planet—has to offer. ORAEFI plays by its own rules, and I wouldn’t be surprised if Sigurdsson didn’t so much as write it as divine it out of the cold northern ether. Quite simply, Öræfi is. 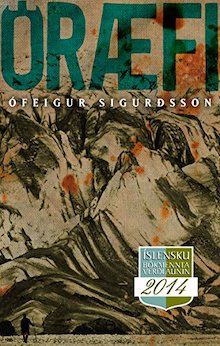 But let’s break it down to the nitty-gritty. At its core, Öræfi is about the power of story—how stories embed themselves into our lives and the very world around us. This is most conspicuously portrayed by the Austrian protagonist, Bernhardt Fingerberg (a completely unveiled nod to the misanthropic rants of another famous Austrian), who has come to a desolate and remote region of Iceland for his research into toponymy—the study of place names. Never has there been a more aloof and idiosyncratic hero in contemporary literature. He is a highly educated fool totally at the mercy of his own obsession. And while he faces harsh elements and unspecified dangers at every turn of his quixotic quest, it is in essence the stories behind the places he goes that threaten to envelope him completely. Sound weird? It is. That is Öræfi.

Moreover, Öræfi is also about the imperfect art of translation. The narrative is recounted by a bedridden Bernhardt—who speaks no Icelandic—to an eccentric veterinarian who only half understands what her charge is saying and does not hesitate to embellish the tale at every turn, and has written it all down in a letter to another unnamed narrator—maybe Sigurðsson himself— who has no idea why this strange story has been sent to him. This makes Öræfi a flashpoint of miscommunication that nevertheless somehow manages to epitomize our need as a species to make sense of the world and its happenings. Even when that sense is founded on misunderstanding. Translation—the necessity of deciphering that which inevitably remains closed off from our own immediate experiences, but somehow still brings us toward unearthing a hidden kernel of humanity. Öræfi, like translation, is an insurmountable distance bringing us ever closer to a truth of our own making. 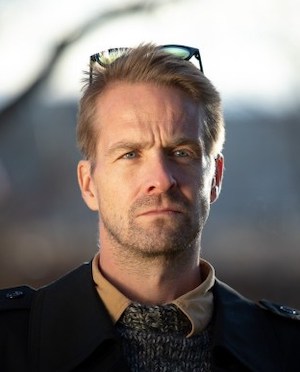 Now, you may be reading this and thinking—WTF!? And that is fine. In fact, that is the point. Öræfi wants you to be confused, to give yourself over to that confusion, to lose yourself in it, and ultimately to see that perhaps that is all there is. This makes it as ballsy a book as I have ever read. A swaggering, sui generis titan of a novel that strides across the imaginary landscape like a Viking marauder laying waste to all the lesser narratives it encounters. It beheads undeserving texts like its cousin, CoDex 1962, and holds the dripping bloody remains aloft as warning and enticement to readers everywhere. Behold, here is Öræfi. Look upon it and tremble…or laugh. Both are equally warranted responses, and all the proof needed that Öræfi: The Wasteland—the product of Sigurðsson’s infinite imagination and Lytton Smith’s undeniable talent as a translator—is without a doubt the best translated book of 2019. Now, cue the death metal.