People in the Room [Why This Book Should Win]

Tom Flynn is the manager/buyer for Volumes Bookcafe (@volumesbooks on all social sites) in Chicago. He can often be found interrupting others’ work in order to make them read a particularly fantastic passage in a new book. Follow him on Twitter and Instagram (mostly book- and grilling-related content) @thomaskflynn. 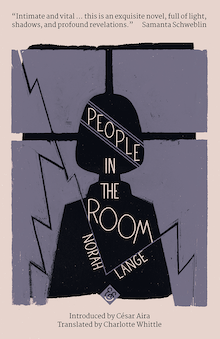 People in the Room by Norah Lange, translated from the Spanish by Charlotte Whittle (Argentina, And Other Stories)

People in the Room should win the Best Translated Book Award. Hell, every book on the longlist should win. The strength and beauty of this award, for me, has been the sheer range of work it encompasses. From contemporary experiments to classic works, the BTBA is one of the best prizes in literature in that it reflects all that literature is, has been, and can be. And this longlist, in particular, reflects just how incredible literature, and literature in translation especially, can and should be. It’s quite a time to be alive. So, yeah, every title on this list should win the award.

But People in the Room really should win.

I’ll spare you a long bio of Norah Lange, partly because providing a sourced literary biography is neither my strong suit nor the reason you’re reading this; mostly because you should really just pick up the book and read the intro by César Aira. (It is super helpful when writing something like this to have an introduction as stellar as César Aira’s available; it’s also kind of infuriating as he’s already laid out pretty much every argument one might make about the book’s relevance. I wouldn’t presume to possess too many original thoughts, but at least let me make one or two claims without feeling like I’m cribbing straight off of you, César.) Let me instead say that while People in the Room is certainly a product of its author’s time, it’s concerns and attitudes make it timeless. That certainly sounds lame (and felt lame to write), but I mean it in a literal sense: publish it today and say the author was born in 1990, and no one would bat an eye. Most books aspiring to some notion of “literature” endeavor to achieve something greater than the sum of their parts and only great books get close to that ideal. Everyone should read Lange to see how she accomplished this. 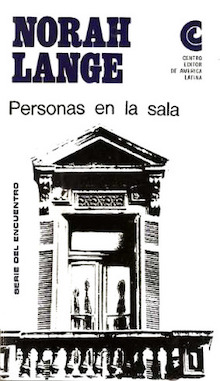 People in the Room, translated by Charlotte Whittle, follows a young woman who espies three women in a drawing room across the street one evening. The arrangement of these women, the way they sit, move, light the room, the atmosphere they seem to create/exist in, fascinates her and sparks an obsession. She continues to watch the women, follow them a bit, and eventually draws closer to them and enters their home, which sounds like an invasion because that is precisely what it is. She is invited in, sure, but comes in because she wishes to consume their lives or, rather, the lives she has created for them through her observation. She wishes to know these women, but she wishes even more to consume their history, to feel and live through their pain and loss. She wants to so that she might, through them, better know herself.

In his introduction, Aira describes People as a spy novel and quotes a statement by Lange to the same effect. I won’t disagree, but the sense of dread that permeates the novel makes it something more spectral than that. This is a ghost story as spy novel (which might be redundant: ghosts are forever peering at us as we are voyeurs of their own indistinct existence). Our first description of the women across the street:

. . . for me, Avenida Juramento would always be . . . a dimly lit drawing room looking out onto the street, with shadowy corners, and three pale faces that appeared to be living at ease

Whenever I saw them, two of them sat close together, the third at a slight distance. I could make out only the dark contours of their dress, the light blurs of their faces and their hands. The one sitting farthest away was smoking, or at least so it seemed to me, since her hand rose and fell monotonously. The other two remained still, as if deep in thought, before turning their faces in the direction of her voice.

and after she begins to visit them:

The first time I called on them they assured me they never went out, so I needn’t tell them when I was going to visit. 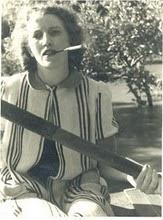 By all appearances these are three women who exist only in a holding pattern, repeating the same motions day after day, a phantasmal existence of sorts. Only by intruding does she somewhat disrupt the repetition of this scene, though even in including herself in the setting the other trappings do not change: the arrangement does not otherwise change. She has managed to place herself in the ghost story, but does not fundamentally alter its action.

But this is really only one of the many interpretations possible with People. One could instead emphasize the examination of customs and mores that runs throughout. Or, one could read it as a coming-of-age tale as our protagonist observes, enters, and leaves that drawing room and how she changes—and doesn’t change—along the way. One could also simply devour it for its prose and atmosphere. In short, this is novel is complete and so exists as an infinitely faceted and fascinating work.

What we have in People is a paranoid thriller, a spy novel, a ghost story, an odd sort of bildungsroman, a study-but-not-a-comedy of manners, and lush, gorgeous prose. This is the book many writers aspire to write, but only get halfway to. It’s the book one could spend the rest of their life re-reading as a keystone text. It’s perfect reading for darkened, stormy skies and the quiet just after dawn. The dead of winter and the blistering summer heat are equally appropriate settings, too. It’s a classic work by a revered writer in her home country and a revelation to English monoglots like me. In short, it is everything a winner of this award is supposed to be. And then some.

Tags: charlotte whittle, norah lange, people in the room, tom flynn, why this book should win