Autobiography of Death [Why This Book Should Win] 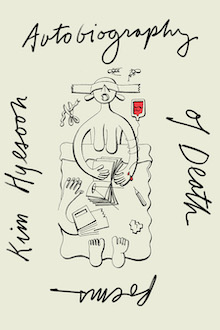 Collective memory haunts the pages of Kim Hyesoon’s forebodingly ethereal Autobiography of Death in Don Mee Choi’s masterful translation. Accompanied by Fi Jae Lee’s surreal-mythical drawings, this powerful work of poetry and witness consists of forty-nine poems, a poem for each day the spirit roams after death before it enters the cycle of reincarnation. The poems give voice to those who have met unjust deaths during Korea’s violent contemporary history, from the many deaths caused by the recent dictatorships and the 1980 Gwangju Uprising’s horrific aftermath, to the 250 high school students who drowned in the 2014 Sewol ferry disaster.

According to Choi’s translator’s note, many believe neoliberal deregulation and privatization that led to safety violations played a crucial role in the sinking of the ship, including the state’s failure to rescue the passengers. Perhaps for this reason, the afterlife notion of “unfinished business” often takes on a literal meaning in Autobiography of Death where work and productivity take precedence over humanity. In the poem “Commute”, for instance, a dead woman rushes to work without her body:

You run away from yourself. Like a bird far from its shadow.
You decide to escape the misfortune of living with that woman.

You shout, I don’t have any feeling whatsoever for that woman!
But you roll your eyes the way the woman did when she was alive
And continue on your way to work as before. You go without your body.

Will I get to work on time? You head toward the life you won’t be living.

Similar allusions to the repercussions of capitalism are made in the poem “Everyday Everyday Everyday”. A dead girl talks into a toy phone, trying to reach her mother, but the call is not going through:

The there is not there but here
Mommy makes money and will come tomorrow, comes every, every
tomorrow

In the next stanza, people on a packed subway hold up their phones like mirrors before the dead, they “are already there like the evaporated dew drops in the morning”. Smartphones reoccur as dystopian mirrorworld devices throughout the book: in one poem, a woman who shoved her own neck into a grave looks at selfies on her phone. In another, a dying woman is mugged, and her funeral photo is stored on the cell phones of the teenage boys participating in the assault.

In some parts of the collection, eerie toy images serve as apparitions of souls deprived of a childhood, or parenthood, sisterhood, of a life that could have been. In other parts, Hyesoon explores a more Pizarnik-esque, goth surrealism of silk corpses, lunar eclipses, and a hand appearing out of nowhere, tugging at your ankle. One of my favorite such moments is from the poem “Gravel Skirt”:

We raised the moon long ago, remember?
The moon used to scramble onto our bed and burrow between us
When we took a stroll
With the moon strung around our wrist
Your skirt went up in flames, yellowy, willowy

Yet tonight
The sick moon, it’s broken face lies in the garden
When you touch it, the moon’s fingers drip down plop plop

Translator Choi succeeds spectacularly here and elsewhere throughout the book in balancing the lightness of the poetic voice with the gravity of the subject matter. As such, Autobiography of Death is a visceral, haunting read that is somehow still kooky, compelling, and completely its own. This volume is an equally stunning accomplishment in poetry and in translation, and I have long lost count of how many peers I have recommended it to since its publication.

Every, every day is the eve of death

The orator strikes his palm down on the table.