“The Naked Woman” by Armonía Somers 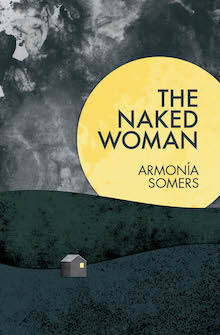 A woman turns thirty, decapitates herself, and after repositioning her severed head onto her neck, wanders through the woods stark naked. In part, this is why the Uruguayan novel The Naked Woman, written by Armonía Somers (a pseudonym), was banned when it was published in 1950. The title could have been more modest, but it does appropriately prepare the reader for its tone—main character (protagonist? antagonist?) Rebeca Linke has no use for penitence.

The translation by Kit Maude is searing, but it is also buoyant and light, reading simply and fluidly. It appeals to a vague and strange, imperceptible not-logic. The audience is bewildered by the re-headed woman’s thoughts, and much is meant to be obscured by both shadowy language and settings alike.

Each new section is indicated by varying lunations—and the cover (designed by Suki Boynton) looks as though it pairs nicely with an A24 featured horror flick (The Witch? Midsommar?). Because of this, the novella is, thematically, in vogue—that’s true—but while reading it, remember that it was written in the 1950s by a Uruguayan woman.

Rebeca Linke represents a transit toward feminine freedom and liberation. The novella is, if not transgressive or polemical, a full-on war on convention. This transit involves moving away from the folly of culture and modernity: rediscovering every facet of her body or reexamining each of her innermost sexual desires. It involves the spiritual possession of holy men. But of course, a newly attached head will result in such exploration (and what Linke refers to as “scandalous amorality”). It results in the treatise against Enlightenment philosophy; logic and reason. Rhetorically, it moves toward total deliverance, which for Rebeca Linke, is opposite of consciousness.

The scandalous amorality, in part, refers more to Linke’s explicit rendering of her own sexual desires, which are starkly foiled by the actual depravity of the men in the novel, who use crass and violent language to describe women (“bitch,” “whore”) and who rape and beat their wives.

Moreover, banned books pique readers’ curiosities. When literature takes the form of exiled intellectuality, it becomes a forbidden fruit. Along with that, witchy main characters are perhaps all the rage today for the same reason that feminism and the return to nature (spiked by growing environmental concerns—a fusion found in ever-emerging trends in eco-feminism) are bourgeoning. However, it may not be entirely accurate to coin Rebeca Linke a witch or demoness (though she does have supernatural abilities). She’s quixotic and indefinable by nature, and yet she has many names. At times she claims to be Eve-incarnate. Her yearning for apples and “forbidden fruits” are suggestive of a greater wisdom and dissent.

Her names are a form of metamorphosis. In the beginning of the novel, the narrator introduces her as Rebeca Linke, but later she tells a woodsman she goes by:

“Eve, Judith, Semiramis, Magdala. And to a man who dreamed of a foot that was centuries older than he, my name is Gradiva, the woman who walks.”

Her list of names is revised throughout the novel, making her identity nebulous. This nebulousness is integral to the spiritual, abstracted, and dreamlike realm of the novel. But further, we know that to name a thing is to have made one step closer to understanding it—like distant stars or what we know exists but is not tangible: like gravity or the wind. With Rebeca Linke, to name her is to step closer to capturing her—which is the sole objective of nearly every villager in the novella.

Consciousness is part of Somers’s treatise against culture. At one point the narrator asserts:

“It was difficult, annoying, to have to look at the world through eyes” and later, “Ever since she had lost her conventional consciousness, she had moved freely without hindrance. What a useless invention consciousness is, she thought.”

Sometimes she notes it explicitly, but significant and repeating symbolism makes it clear that consciousness is a useless tool best exemplified by decapitation and the rebirth of perception. Eyes and empiricism are useless––the naked woman does not deduce, she intuits.

The novella, written 69 years ago, is a radical, feminist gem even for today’s readership. Somers’s narrator philosophizes about mundanity with the fervor of French philosopher Albert Camus and Ivan Goncharov’s Oblomov. She questions the greater ontology at play––that after this thirtieth birthday, this Saturn return, no two days will look alike for her again.