Garden by the Sea by Mercè Rodoreda [Excerpt]

To celebrate Women in Translation Month, we’re going to post excerpts from several of our forthcoming books, starting with the new Rodoreda title, Garden by the Sea. You can get 40% off this and ALL Open Letter titles written or translated by women by using the code WITMONTH at checkout on our website. 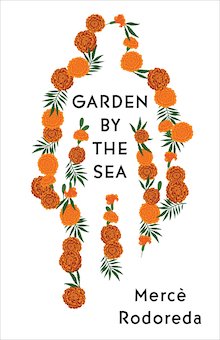 Garden by the Sea by Mercè Rodoreda, translated from the Catalan by Maruxa Relaño and Martha Tennent

I’ve always enjoyed knowing what happens to people. It’s not because I’m garrulous but because I like people, and I was fond of the owners of this house. But all of this happened so long ago that I can no longer recall many of the details. I’m old, and sometimes I get mixed up.

There was no need to go to the Excelsior to see films the summers they came with their friends. There was this one fellow who liked to paint the sea, Feliu Roca he was called. His work had been shown in exhibitions in Paris, and I believe he’s known in Barcelona and made a pile of money with his swathes of blue. He had painted the sea in all of its incarnations: calm, wild, big waves, small waves. Green, the color of fear. Grey, the color of clouds. Seascapes. He said he did seascapes, and his friends encouraged him to dapple the canvas because that’s what Americans like. They made fun of him and would say too many painters had painted the sea already; and then the young man, a good-looking fellow with ash blond hair and sleepy blue eyes . . . He stuttered sometimes. Such as when the colors didn’t come out the way he wanted them. I’m referring to the paint mixture. And he would say to me: it’s more difficult to paint this beast of blue than to tend flowers. And I would answer: you’re right, yes you are. Flowers grow all by themselves. Maybe that’s why there’s so little merit in being a gardener. I said it just to make him happy, and he said that when he finished painting the sea in every possible state of seaness, he would paint me, sitting in the sun. I didn’t believe him. No. Every summer, when he came up, I was glad to see him again and I think he was glad to see me too. Six summers . . . all told, six summers and one terrible winter.

One of his female friends—there were two of them and they always came—was named Eulàlia. The other was Maragda. This Maragda was a seamstress and had been Senyoreta Rosamaria’s boss when Rosamaria had worked for her as a young girl; that’s how they became friends. When they returned from their morning swim, I always tried to busy myself with the nearby flowerbeds, the one that’s full of marigolds in particular, so I could hear them talking. Such gaiety and youth, so much money . . . so much of everything . . . and two wrecked lives. I once saw a bird that let itself die. It must have been a desperate bird, desperate like Eugeni.

The first time I met the masters, the Senyorets, was in early spring, shortly after they were married. I knew the gentleman from before. I had seen him twice, once when he visited the estate with the intention of buying it, the other when he came to oversee the progress of the renovations. That second time he told me he would like me to stay, it suited him fine to keep me on as the gardener. They were to honeymoon abroad and were only stopping here for a short visit. Lots of strolls and time spent on the belvedere gazing at the ebb and flow of the waves, at the sky and all the movement within it, standing close to one another, sometimes holding each other. If ever I approached them during the day, I always coughed to make my presence known; it’s no sin for a married couple to embrace, and yet I thought they wouldn’t want to be seen. Quima, the cook, was already there that year. And after that they hired her every summer because the cook they had in Barcelona went home to her family. Quima made me tell her everything they did in the garden, and she told me everything that happened around the house. She got a lot of it from one of the maids, Miranda, a Brazilian girl. This Miranda wore a black dress, so formfitting on her snake-thin body that she would have been better off not wearing anything at all. And an apron of lace no larger than your hand. She thought she was something special. But there wasn’t much for Quima to report because nothing much happened. Sometimes Senyoret Francesc would slip an olive into Senyoreta Rosamaria’s mouth and she would take it with her little teeth. Apparently he was crazy about her. Quima said that when Miranda was telling her this, she, Miranda that is, who was the color of licorice, went pale. With envy, Quima said. These girls from Brazil are like that, it seems. One day they went out for a ride in the car and Quima took me upstairs. I was afraid they would come back and catch us. She said: “Wait till you see the jewelry she has! Senyoret Francesc is one of the wealthiest men in Barcelona!” And she showed me lots of baubles, all diamonds she said, and a necklace with a teardrop pendant dangling in the middle. Rich folks, they were, really rich. And trusting. Through the slats in the blinds we looked out at the garden. The grounds that came with the villa, and the adjacent lands, were fields of grass and weeds back then, teeming with lizards.

They left, saying they would be back in June with some friends. They handed me the keys and left me in charge of the house, which I was to air out from time to time. I was very pleased when I received the letter announcing their return. And just as they had instructed, I hired Quima for the summer, and her face flushed with delight because Senyoret Francesc mentioned in his letter that he especially liked her oven-baked sole. Miranda arrived with her huge suitcases two or three days before the rest of the family, and never opened her mouth. I headed outside to my plants. She, to the dust indoors. They came by sea. Three days later we heard a horn and I caught sight of the boat right away, coming in slowly, and when it was close enough they lowered the outboard. They stayed on the beach because they were already in their ; they swam, and one of the friends began to on the water like a little figurine. They had brought an instructor to teach them, the skiing part I mean, and Senyoreta Rosamaria, just for laughs, asked me if I would like to learn myself, but I said . She asked if any of the flowers was ill, and I said I was glad to report they were all in fine health. They took on a new maid, Mariona, a village girl I knew by sight, very young, small and smooth as a pebble.

At night, from the mulberry and linden tree promenade, I would often find myself looking up at the masters’ bedroom window. I have always enjoyed walking in the garden at night, to feel it breathe. And when I grew tired I would amble back to my little house, reveling in the peaceful existence of all that was green and filled with color in the light of day. Gradually I became aware that someone else was often in the garden at that late hour. I concealed myself and stood watch, and I saw it was Miranda. I was annoyed because she held a branch in her hand and was beating my plants with it as she walked. One night I came out of the shadows and gave her a piece of my mind.

“Miranda?” Quima said one day. “I don’t like her. People who are awake during sleeping hours shouldn’t be trusted. What Miranda is really after . . . but clearly Senyoret has eyes for only one thing. I don’t think Senyoreta Rosamaria has any cause for concern.”

“Some men are attracted to people from faraway places, so they can dream of exotic trees and colorful feathers,” I said. “It suits them better.” Quima said I was off my rocker and threatened never to speak to me again. I wasn’t so crazy after all. Miranda played the innocent and went about laying her snares.

For a long time I knew very little about Senyoreta Eulàlia, the one who knew how to skate across the sea. Pale of skin and dark of hair, there was a reserved air about her. She was nothing like our Senyoreta, who radiated something that was like fair weather. For a while I suspected Feliu, the painter, was sweet on Eulàlia. But he was caught up in his painting. One day I teased him about it, and he said he wasn’t attracted to ladies who put on airs, and the task of entertaining them should fall to someone else, and rather than a bouquet of roses he much preferred a bunch of . . . he pointed to some flowers. “Foxglove,” I said. “A simple flower.” And he said: “If I’m not careful, there are ladies who would devour me alive, and the painter would be finished before ever getting started.”

I don’t know if he was right, and he probably didn’t either, but we both laughed. Now and again Quima would ask me what Miranda did at night.

“Nothing. She wanders about. As long as she doesn’t harm my plants she can do as she pleases.”

One moon-filled night she went for a swim. I wouldn’t have recognized her if it hadn’t been for the moon. She sprinted into the water as if entering a sea of ink. And when she emerged she gleamed like an olive. She stretched out on the sand and she lay there for so long I thought she had fallen asleep. And swoosh, swoosh, swoosh went the water, here I come and there I go. I mimicked the frog’s call and Miranda didn’t move. Still as death. I finally tired of singing and went home to bed. And just as I was falling asleep: croak, croak, croak beneath my window. I could have strangled her. I pretended to be asleep and I have resented her ever since.