“Seeing People Off” by Jana Beňová 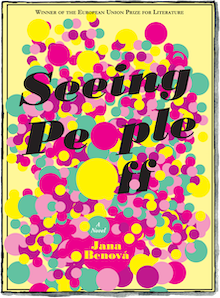 Jana Beňová’s novel Seeing People Off, translated from the Slovak by Janet Livingstone, exists between clarity and confusion. Set in the Petržalka district of contemporary Bratislava, many of the elements here are recognizable, quotidian even: four struggling artists drink at the Café Hyena, deal with loud neighbors and local eccentrics, argue about a David Lynch movie, take a brief seaside holiday, and find ways to get by economically and emotionally. Yet the novel slips away from the conventional at every turn. There’s a reality TV show set in a concentration camp with participants divided into guards and Jews, a tennis line judge develops an extremely limited form of telekinesis, Borges makes a cameo appearance as an eccentric neighbor, and still these examples don’t quite capture the sense of strangeness that permeates this slim, intoxicating book.

The narrative centers on two couples—Elza and Ian, Rebeka and Elfman—and the ways in which their lives are embedded in dense blocks of high-rise apartment buildings bounded by the Danube. “In Petržalka apartments all the walls play music and talk. You’ll be reminded here of songs you thought the world had long forgotten. Time stands still. Radios are tuned to the same station for years. The needle showing the stations has sunken into the bowels of the machine.” The main quartet are artists, though their art rarely makes an appearance, and take jobs in turn so that three of them are always free to create or, at least, lounge about. We see the most of Elza and Ian’s relationship, usually from Elza’s perspective. Things happen in this novel—Elza has an affair with an actor, Rebeka is institutionalized, Elfman flees, and Ian’s mother falls ill—but the plot feels incidental to the images and ideas here, perhaps because the tone is generally flat, deadpan even. “Ian remembers that when he was little, on their street a neighbor came back from the nuthouse after having electro-shock therapy. He came back home after two years. In a single night he cut down all the electric power posts on the street.”

The narrative continuity is also disrupted by the book’s structure—much of it is a stream of vignettes and digressions connected more by association, or location, than by plot. That’s not to say that the structure is random. There are refrains that echo throughout—a quote from Pinocchio, skinheads, a pinging sound, a small fast dog—and remix themselves as the book progresses. Janet Livingstone’s translation here is impressive, especially given that the contents of one paragraph are often no guide to what the next might contain. These shifts also create more space for the sentences to wander away from convention, though I’m not sure whether that is a function of the original or the translation or some combination of both (I don’t read Slovak). Take, for example, the sentence quoted in several reviews: “Elfman claims that the genius loci of Petržalka is in the fact that, in time, everyone here starts to feel like an asshole who never amounted to anything in life.” Is the plural “loci” a nod to all the many different apartments in densely populated Petržalka, or should it be, “the genius of Petržalka is located in the fact that . . .”? Seeing People Off greases your hands and everything becomes slippery.

Ideas are at play here, though subtly enough to avoid easy description. The warren-like nature of  Petržalka is used to engage with the labyrinthine nature of modernity, as characters often get lost and the book itself announces several conclusions while still continuing. Endings percolate through the novel as well, of childhood, relationships, and lives, and are presumably what the title references. More concretely, Petržalka witnessed horrors under Nazis and Stalinists, and there are indications (skinheads, a swastika, kids playing at being Hitler) that anti-Semitism is again on the rise.

The final sections of the book settle into relatively extended narratives (a whole three or four pages at a go) involving Elza’s childhood and then the final illness of Ian’s mother. Elza and Ian’s efforts to care for his mother as she succumbs to dementia are wrenching, and somehow more powerful for the matter-of-fact tone. “Elza would run around the apartment after toothless Mama, constantly offering her the teeth. She clutched the teeth tensely in her hand. Mama wept from fear. Ian plugged his ears. Elza ran out into the yard, helplessly clenching her fists, fingers curled over bitten-up palms.”

Jana Beňová (b.1974) has published four novels in Slovak—Parker (2001), Seeing People Off (2008), Away! Away! (2012), Honeymoon (2015)—along with three books of poetry, a volume of short stories, and a collection of her journalism. Seeing People Off, winner of a 2012 EU Literature Prize, was the first to be translated into English, but Away! Away! is now available as well, also translated by Janet Livingstone. The two novels by Beňová are the first works in translation to be published by Two Dollar Radio, and it seems a natural pairing.