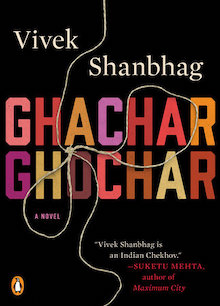 What purpose does a book serve if its content can be neatly condensed onto, and thereby extracted from, its book jacket? Intentionally or not, author Vivek Shanbhag answers this fundamental question in a surprising way with Ghachar Ghochar.

Translated into English from the Kannada by Srinath Perur, Ghachar Ghochar (2015) is the eighth fictional work published by acclaimed writer Vivek Shanbhag. In its tale of an impoverished Indian family whose lifestyle capsizes after gaining sudden wealth from starting a spice trade company, the novella’s themes touch upon those tackled by such American classics as Death of a Salesman and A Raisin in the Sun.

If its plot is reminiscent of A Raisin in the Sun, its narrator—an unnamed, unassuming young man who kills time by reflecting on day-to-day observations—is reminiscent of The Great Gatsby’s Nick Carraway. Despite playing no active role in the constant social conflict within which he gets entangled, he finds that his owns world is spinning. So, too, is the coffee he seems to be indefinitely stirring at Coffee House—an old-world café where he seeks comfort in the familiar. The familiar being the old ways of life.

Through the narrator’s flashbacks, readers learn that coffee is not the only thing brewing at Coffee House. A newly rich man with no need to work, it is at this café that he churns through memories, attempting to make sense of his increasingly turbulent domestic affairs by pinpointing the moment they went awry. The narrator recounts how his uncle, the family breadwinner, transformed from washed up salesman to CEO almost overnight. What follows is a disruption of family order that parallels that of larger Indian society during the nation’s recent era of industrialization, feminist enlightenment, and socioeconomic transition.

The flashbacks also tell of old and new generations at war within his family, including battles between his mother and his new wife regarding a woman’s place within the delicate familial dynamic. Feminist undertones fully emerge by story’s end, when the narrator is left sitting alone, wondering if his marriage has permanently collapsed or if his wife will return. Clearly, it is no longer he who is in control of the power struggle that has become of his once happy marriage.

At its heart, Ghachar Ghochar is a book of chaos: the line where modernity and traditional culture clash. Take the case of the narrator’s family gaining unexpected—and ultimately detrimental—prosperity by capitalistic means as they enter the big, bad business world. Here, the old sentiment “be careful what you wish for” does well to describe Ghachar Ghochar’s thematic complexity. For, after careful meditation, the only conclusion the narrator is able to reach is that neither financial prosperity nor feminism immediately translate to social peace; both require hard work to make their unadulterated ideals a lasting success.

All of these flashbacks materialize in the symbolic scene of ants overrunning the narrator’s former home—ants, he observes, that uncharacteristically fall out of line, choosing to march independently rather than in orderly single-file rows. Like the ants, so do the novella’s characters march to the beat of their own drum. With newfound money comes newfound boldness as the younger generations dare to defy expectation by falling outside the lines drawn by the hierarchical conventions of traditional Indian society.

If there is one constant throughout the chaos, it is the narrator’s recurring comments on the difficulty of explaining things—be they events, feelings, actions, or behavioral motives—to people who don’t possess the full contextual background of the circumstance in question. In one scene, the narrator’s wife becomes upset after witnessing her husband kill an ant for (at least to her) no discernible reason. The narrator then laments on the hopelessness of trying to get her to understand his actions without him first explaining their deep-rooted context. He confides to readers: “How was I to explain to her my history with ants? It would make no sense to someone who hadn’t lived through something similar” (p. 76).

And in this way, Vivek Shanbhag masterfully touches upon why we read stories in the first place: books are written because they are the only means we have to thoroughly explain a circumstance by showing audiences the context leading up to that circumstance. In the case of this novella, flashbacks are employed because past and perspective are essential to explaining how and why things are what they are today—be it why the narrator kills ants, or why India is experiencing a socioeconomic reorganization. Context is everything in this story—a story of past, present, and how the two influence the future. It gives words (including the titular “ghachar ghochar,” a made-up phrase whose meaning only exists within the inside joke of the characters who invented it) their very meaning. As Vivek Shanbhag writes in this novella, “Language communicates in terms of what is already known; it chokes up when asked to deal with the entirely unprecedented.” In the end, past, perspective, and context are what book jackets lack in giving a text its meaning.