Season 11 of the Two Month Review: “The Dreamed Part” by Rodrigo Fresán

After a slightly longer hiatus than expected, the Two Month Review is coming back! In fact, we’re coming back TOMORROW, Thursday, March 5th at 1:30pm. We’ll be recording an introductory episode in which Chad and Brian combine their weakened, time-ravaged memories to recap The Invented Part, the first volume in Rodrigo Fresán’s trilogy (and the subject of the first ever season of TMR) before launching into the second volume, The Dreamed Part, both translated from the Spanish by Will Vanderhyden. (The third volume, The Remembered Part, is forthcoming, but it’s the longest, so it’s going to take Will a minute to get this done.) 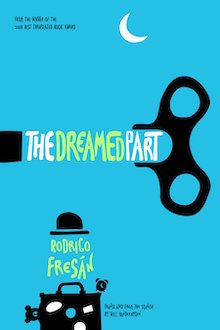 If you want to read along, you can get a copy of The Dreamed Part from your local bookstore, online retailers, or directly from our website. If you use the code “2Month” at checkout, you’ll get 20% off. (BUT, if you order now, the book is only $10 as part of our #NoAWP2020 sale. ALL of our books are $10 for one, $20 for three through this weekend. So go wild!)

Here’s the jacket copy for The Dreamed Part:

With characteristic wit, careening style, and array of cultural references, high and low and everything in between—from Shakespeare, the Brontë sisters, and Vladimir Nabokov to Talking Heads, superhero movies, and Rick and Morty—the second volume of Fresán’s trilogy is one of the most ambitious, unique, and entertaining novels of our time.

And now, the most important part, this season’s schedule:

March 19: “That Night (Footnotes for an Encyclopedia of Sleepwalkers)” (pgs 1-57)

April 2: “The Other Night (Irrational Catalog for an Exhibition of Restless Shadows” (pgs 112-155)

April 9: “The Other Night (Irrational Catalog for an Exhibition of Restless Shadows” (pgs 156-202)

April 16: “The Other Night (Irrational Catalog for an Exhibition of Restless Shadows” (pgs 202-254)

As always, we’ll record these LIVE on YouTube, so that you can interact, ask questions, get to know the various places where we live and/or work, come to the realization that my preferred mode of dress is a hoodie and a hat, etc. The podcast version will drop on all the Thursdays listed above, and is available from wherever you get your podcasts. (Except maybe Spotify? I need to figure that out . . .)

If you haven’t listened to the season on The Invented Part, you’re totally missing out. That was a wild, entertaining, amazing season over the course of which Brian and I figured out our groove and how to do this podcast. Every episode–and every post that I wrote for this–can be found here.

I’m really looking forward to this season and hope you’ll all join in and read along!!


Previous post
Three Percent #178: This Podcast Is Not Contagious
Next post
TMR 11.1: “We Remember Everything” [THE DREAMED PART]