“Die, My Love” by Ariana Harwicz [Why This Book Should Win]

Josh Cook is the author of the novel An Exaggerated Murder, published by Melville House in March 2015. His fiction and other work has appeared in The Coe Review, Epicenter Magazine, The Owen Wister Review, Barge, Plume Poetry Anthology 2012 and 2013, and elsewhere. He was a finalist in the 2011 and 2012 Cupboard Fiction Contest. He is a bookseller with Porter Square Books in Cambridge, Massachusetts. 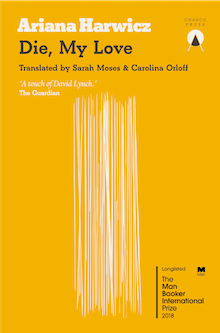 Die, My Love by Ariana Harwicz, translated from the Spanish by Sarah Moses and Carolina Orloff (Charco Press)

We know from books like The Awakening what is supposed to happen when a woman discovers she does not want the family life society offered to her after she has already started that family life. She uncovers her artistic potential and then decides what value her old life has in relation to the life she can now imagine for herself, and then, she either returns to that life in some form of reconciliation and/or defeat or she swims until she can’t see land.

We know from books, movies, TV shows, and other media what it means when a man acts out against the expectations of family life set by his society; when he drinks too much, when he sleeps with the neighbor, when he neglects his child, when he runs out into the fields and forests like he’s been possessed by a druidic spirit seeking the real name of the god of roots and stones. These are the actions of an artist, of a genius, of someone who understands how limiting that family life society has offered is, how that life limits all of us even those—or especially those—who believe they are satisfied within it, and is fighting back, perhaps even waging guerilla war against the state, striking from hideouts deep in the jungle or high in the mountains; a hero even, one who has risked himself and his family to loosen the fetters binding all of us. We look at the destruction in his wake with a certain kind of realist’s awe, wishing for fewer broken things of course, but knowing—just knowing—that genius bears breakage. And that breakage is worth it. Collateral damage.

We can’t really, truly know if we want children until we have them. We can’t really, truly know what kind of parents we will be until we are parents. Educated guesses at best. Sometimes not even educated guesses but guesses forced by circumstance. Guesses can be right, but they can also be wrong. Right guesses and wrong guesses both have consequences.

But what if you’re not an artist? What if you chafe against the confines of the family life offered to you by society, strain against those bonds, struggle for the freedom to do something else and be something else, and in the process you don’t discover untapped artistic potential, you don’t discover a more meaningful possible life, you don’t find a landmark you can swim to or drown while trying? What if you attempt all the actions associated with artistic genius—at least when men do them—and in the end discover that you just did not want a child but now have a child?

“I hear the chainsaw.”

Either one of those versions of Die, My Love is a challenging book, maybe even a dangerous book. But Harwicz has also thrown a surprising stylistic frame around her plot, telling her story of a woman and mother struggling against her life with the prose and pacing of a horror novel. Her affair is presented as a demonic possession, but it’s unclear who is being possessed by who. An injured dog is shot off page and you’re not sure whether the trigger was pulled more by mercy or malice. Even when the protagonist just kinda runs out into a field and has a weird time there, the prose makes you feel as though fingers might crack through the earth and drag her to hell.

How familiar should a translation be to speakers of a different language? Should the book feel recognizable to them once it is translated into their language? Should they feel welcomed? Should they feel comfortable? As general practice, I don’t have a satisfying answer, but the case of Die, My Love the answers are: What’s the point of being recognized, No one is welcome, and Comfortable is the worst thing you can feel. Die, My Love posed a formidable translation challenge to Sarah Moses and Carolina Orloff. To be true to the text, they needed to let the prose feel like a hair shirt, but they also needed to keep people reading, to open a few entrance points for those of us who didn’t already trust Harwicz. To be honest, it took me a fairly long time to get into the book. It wasn’t until I understood the style as horror novel prose, that I realized the project and greatness of the book. In their translation, Moses and Orloff essentially had to string a tight rope for me to teeter along from my reading expectations to the book’s project. A bridge would have been a lie. A chasm an impossibility. They had to preserve the seeds of unease Harwicz planted without making me so uneasy I gave up and they did.

And because of the seeds of unease planted over the course of the book, by the end it is impossible to let your guard down. The moment things look like maybe they seem to be going OK enough for all involved, it feels like someone has sneaked up behind you. You are immediately prepared for a disaster, something worse than anything you’ve read to date, and now you are doing the author’s work for her; the cruelty inherent in your own imagination is creating the types of images Harwicz wrote earlier in the book. At some point you notice the hairs on the back of your neck are standing up and have been standing up for some time. At some point you realize the only way to end the anxiety you’re feeling, give the fear and stress a chance to drain out of you like puss, is to stop reading Die, My Love, set it down and walk away either for a break or because you’ve finished it. Or maybe you feel as though you can’t even just walk away, that the only effective way to release what has become contained, is to run as fast as you can through the forest hoping the branches cutting your skin lance the boil and release puss, while also hoping you can make your run and get your cuts without losing an eye. There’s leading a reader to understand the emotions of the characters and then there’s making the reader feel them.

A brutal heart beats at the center of Die, My Love. Pumping brutal blood through brutal veins to brutal brains thinking brutal thoughts brutally. And then just beyond the edge of page, surrounding the covers of the book, unwritten by Harwicz is the solution to the problem her book poses, that state of being in which none of the suffering she has depicted happens. All we need is a world that assumes men and women have the same inherent humanity.

“I heard the chainsaw.”