“China Dream” by Ma Jian [Why This Book Should Win]

Justin Walls is a bookseller based in the Pacific Northwest and can be found on Twitter @jaawlfins. 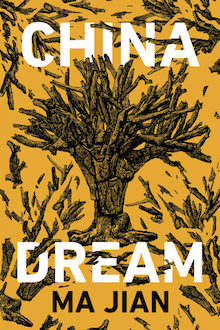 A stodgy government functionary nods off at his desk midday, momentarily receding into dreams of the past, before awaking to find that some pesky memories refuse to be shaken. In fact, they are right there in the room, staring back at him. Ma Daode, duly appointed director of the China Dream Bureau, has what you might call a personal stake in the invasive initiative he’s been charged with overseeing. In short, the China Dream project is a neural implant. Once installed, this microchip effectively replaces the nocturnal nuisance of dreaming with a shared vision of national rejuvenation. While President Xi Jinping’s staunch opposition to Western individualism serves as the inspiration for this technological nightmare, the prospect of propagandizing the inside of every eyelid holds an undeniable appeal for one bureaucrat, in particular.

“And I, Ma Daode, volunteer to wash my brain first,” declares our notably ranine protagonist while announcing the device’s development at a stuffy staff meeting. The director has been experiencing eidetic intrusions, impromptu manifestations of Mao’s Cultural Revolution that appear grafted onto his present reality. Slogans reading “SURRENDER OR DIE” materialize anachronistically on the outer wall of a newly constructed industrial park. A pier at the river’s edge invites the image of a watery mass grave. It reasons, or so Director Ma assumes, that if this miracle doohickey (any laborious back-bending undertaken in service of a nuts-and-bolts explanation on how the device actually works is, mercifully, absent) can unite a nation, it could also cleanse his mind. Tormented by his complicity and participation in this era of bloody factionalism, Ma Daode wants nothing more than to put the past away, even as it’s come to define him.

Ma Jian’s China Dream, here presented in a crisp translation by Flora Drew, is often classified as satire. Carved into episodic chunks, the novel interpolates dry humor among the reminiscences of petrol bombs and scissor fights, undercutting the broad historical scope with petty chicanery and a prodigious amount of poetry-laden sexting. When Director Ma, in one section, is deployed to talk some sense into the dug-in residents of a village scheduled for demolition, he does so by amending the aforementioned “or die” mantra, instead pleading with the gathered crowd, “surrender now, and trust that the government has your best interest at heart.” In a later set piece, the director unwinds with a trip to a brothel, electing for an evening of debauchery in a room made to resemble Mao Zedong’s private train car, complete with attendants kitted out in the garb of the revolution.

Each instance takes pains to illustrate Director Ma’s status as a man out of time. Even as he trusses up Red Guard agitprop for modern sensibilities, a young rabble-rouser dismisses his outmoded rhetoric as the language of “the ‘culture rebellion,’ or whatever you call it.” More embarrassing still, the director incorrectly assumes that the armband-adorned sex worker he visits is herself a student of the revolution. (“Not really—what was it exactly,” she deadpans.) The patent absurdity of an ineffectual bureaucrat endeavoring to expunge an entire decade from the collective consciousness, oblivious to the fact that younger generations have long since dispensed with any meaningful awareness of the period, is evident.

“The book is filled with absurdities, both real and invented,” writes the author in his introduction to the novel. Ma goes on to say that his work serves “to drag memories out from the fog of state-imposed amnesia, to deride and mock China’s despots and sympathize with their victims, while remaining conscious that in evil dictatorships, most people are both oppressor and oppressed.” It should perhaps come as little surprise that, in exchange for a career spent thumbing his nose at unscrupulous regimes, Ma Jian has been exiled from China. The books he’s written, and continues to write, are banned there. A debt of gratitude is owed to Flora Drew, whose crystal clear translation lays bare the enormous strength that mockery and derision can possess when wielded by a seasoned troublemaker.

How American readers, immersed in what has been described as a post-satire state of affairs, might contend with such a novel is ripe for speculation. As of late, attempts to re-dress old positions for currents tastes have, without a doubt, proven a viable tactic in stateside political discourse. If you had a hand in engineering the Iraq war, for example, you can now claim to have stood against it with a straight face. Total retcon. Far more powerful than our ability to allow history—even recent history—to be erased, however, is the American willingness to simply not give a shit. Recollection is a burden. Providing context and spotting contradiction is too fussy, even somehow a bit underhanded. A memory-wiping gadget might seem rather superfluous to a populace already saddled with an obsessively equivocating media sphere and disenfranchised working class. The dream, for all intents and purposes, may have come true.

In honesty, any effort to paint China Dream as a work of period-specific “relevance” would be selling it short. Ma Jian’s everything-happens-so-much approach stealthily elides easy one-to-one comparisons. Instead, we take a ride on a chronological carousel, a simultaneously disintegrating and regenerating multi-linear loop, barreling forward even as it feels stuck in reverse. By the novel’s third act, Ma Daode has a serious case of the spins, wandering the streets with his name and title scrawled on a piece of cardboard hanging around his neck, reduced to foraging for a natural remedy to his ailments. At last, the philandering apparatchik is both oppressor and oppressed.

Time makes fools of us all. Though, as evidenced in Ma Jian’s excoriating China Dream, it makes bigger fools of some more than others.