“Labyrinth” by Burhan Sönmez [Why This Book Should Win]

Tim Gutteridge is a Scottish literary translator, working from Spanish into English. His translation of Miserere de cocodrilos(Mercedes Rosende) will be published later this year by Bitter Lemon Press as Crocodile Tears. He is currently working on the translation of Jauría, a verbatim drama by Jordi Casanovas based on the notorious Manadagang rape case of 2016, in which the dialogue is taken directly from witness statements and court transcripts. He lives in Cadiz (Spain) and blogs about translation at http://timgutteridge.co.uk/blog/. 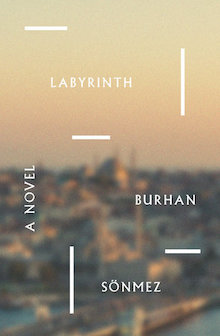 Labyrinth by Burhan Sönmez, translated from the Turkish by Ümit Hussein (Other Press)

In Labyrinth by Burhan Sönmez, translated by Ümit Hussein, a Turkish blues musician called Boratin has attempted to commit suicide by jumping off the Bosphorus Bridge, which connects the European and Asian sides of Istanbul. Miraculously, he survives the fall almost unscathed. His only injury is a single broken rib. And the almost but not quite total loss of his memory. He has, crucially, no recall whatsoever of his personal life prior to the fall, no memory of people’s faces and names, of events or feelings. He does recall some historical and political facts but even this is flattened by his simultaneous inability to order them in time, so that when he sees the election poster of a politician he confuses it with a figure from the Ottoman Empire, while his knowledge that the city’s main train station was badly damaged in a fire doesn’t prevent him from going there to catch a train. In his mind, the fire occurred a hundred years ago and the station had subsequently been repaired; in reality, the fire happened only a few years ago and the station has been abandoned ever since.

Bek, a friend and fellow musician, takes it upon himself to look after Boratin, gently but persistently seeking ways to re-establish Boratin’s connection with the past. It is not clear if the failure of these attempts is due to the scope of the challenge itself. Perhaps, once you have been severed from your past no amount of reminiscence can reconnect you. Or the failure could be a result of Boratin’s resistance, his unwillingness to incorporate his friend’s account of the past into his own tightly bounded present. Or it could be because there is something fundamentally unconvincing about Bek’s account. There is, specifically, no clue as to why Boratin might have tried to commit suicide. And, more generally, everything Boratin is told casts him in an unremittingly positive light. He helped everyone and was loved by everyone. Is it simply too good to have been true?

We have, then, a novel that can be read both as a reflection of the role of memory in personal identity and as an allegory for what happens if a society loses its connection with its past—or remembers it only as history (“While everyone is trying to give you a past, what they’re actually giving you is a history. In the former everything is alive, in the latter it’s dead”)—although I suspect that for most readers in English this allegorical aspect will be secondary, hinted at through the Istanbul setting and occasional references throughout the text.

Instead, reading Labyrinth as we entered the fifth week of lockdown (confinamiento) in Spain, I found myself identifying with the sense that Boratin may be at once trapped and freed by his loss of memory, his daily world lived—at least at the beginning—largely within the confines of his apartment, the past suddenly unimaginably distant, the future inconceivable. And yet, this confinement also offers a strange freedom as the present moment becomes everything, no longer reduced to the service of the past and the future.

Finally, a brief comment on Ümit Hussein’s translation. With the caveat that I don’t read Turkish, this feels like a very accomplished piece of work, one that is neither too eager to please nor aggressively foreignizing, creating a distinctive, almost poetic voice that doesn’t shy away from the unusual (“The sound of the clock [. . .] rings out as loud and clear as a grinding stone”) or stumble on the potentially confusing (for example, a narrative that switches between first and third person, often in mid-paragraph).