Julia Sanches is a translator working from Portuguese, Spanish, and Catalan into English. She has translated works by Susana Moreira Marques, Daniel Galera, Claudia Hernández, and Geovani Martins, among others, and is a founding member of Cedilla & Co. 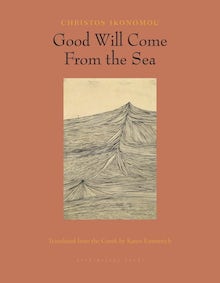 Good Will Come from the Sea by Christos Ikonomou, translated from the Greek by Karen Emmerich (Archipelago Books)

About halfway through Christos Ikonomou’s Good Will Come from the Sea, as the titular story wound to an end, I realized I hadn’t been breathing. My eyes were trained on the text, moving determinedly down the page, but my breath had caught somewhere between my lungs and the roof of my mouth. As Lazaros the Bow searched the island for his lost son—“If Petros went into the Dragon Cave that night,” the narrator muses, “and if the cave stretches, as they say, whole kilometers beneath the island, and if the island is, as they say, hollow in places, then at some point he’ll surely be able to hear him”—my breath remained shallow and my attention focused.

It feels odd to read a book positing the distant aftermath of an economic crisis that for years left Greece gasping for air right as we’re in the midst of another economic crisis whose lasting effects remain to be gauged. I wouldn’t say this book leaves me with a sense of hope. But it does leave me with an aftertaste of resilience. In an interview that framed Ikonomou as the “Accidental Prophet of a Country in Crisis,” the author claimed he wanted his work “to show what it means to be human in a world that rapidly changes in a not very human way.” Good Will Come from the Sea, the second collection of Ikonomou’s stories to come out in Karen Emmerich’s faultless translation, is populated by people fighting to maintain their livelihoods and dignity under circumstances beyond their small, human control. To say this is a book about the crisis would be too limiting. Rather, it is a book about people staring foggily into a future difficult to discern while trying to navigate an unmarked present.

Much of the tension across the collection is generated through repetition—the book echoes like a cave—and through a sort of temporal pulsion, a single moment stretched dangerously thin and then compressed in the second it takes for something to happen. The characters in each piece seem suspicious of the past, uneasy in the present, and understandably wary of putting too much stock in the future. The collection’s title—“good will come from the sea”—echoes across the book with a hint of despair but also of its sister feeling, hope, rolling the reader steadily toward the end.

The collection is composed of four rather long stories, all of them set in the same place, featuring Greeks from the mainland who have moved to one of the less-affected, myth-steeped islands of the Aegean Sea in search of refuge. Here history and myth are a very distant backdrop, and the locals refer to the newcomers as “foreigners” who in turn refer to them as “rats.” The conflict between both is set up in the opening piece, “I’ll Swallow Your Dreams,” which takes place over one night and follows a group of friends who have gone to a place called the Refuge to celebrate Easter. One of them, Tasos, is a sort of village philosopher and the man seemingly responsible for the adage that will tiptoe across these stories: good will come from the sea. Humiliated after a run-in with the rats, Tasos vanishes into one of the many caves that riddle the island, never to be seen again.

In “Kill the German,” one of the collection’s more demented stories, Chronis, a young wheelchair-bound man who reads voraciously, has an active imagination, a pet scorpion, and a rollicking, sometimes cringey, sense of humor—Karen Emmerich’s skill as a translator is particularly tickling in this description: “It’s a neologism. Or maybe a neoplasm. . . A psychic edema where I’d prefer some psychedelica”—stares out his window at the house across the way, plotting the rescue of the girl the old man locks in his room every night. “Don’t listen to the other foreigners,” Chronis says, “good will come from the sea not in a rowboat or on a ship, but in a floating wheelchair.” It’s a line that both explodes the notion of the mythical hero and positions him as the “good”. Unsurprisingly, the closing image of Chronis clawing his way up to the room of the old man is a sad one, and his motivations for rescuing the girl—“You don’t know her,” he tells us. “If you saw her you’d understand. Like a doll. Soft blond fuzz. A body that glows like a candle in church”—are at best suspect.

In “Kites in July,” Artemis and Stavros linger by the ashes of the ouzeri they had been renovating by the seaside in an old building owned and abandoned by Artemis’s uncle, who lives in Germany. (Germany, the real villain in this story.) As they envisage the ouzeri they will one day run, which they have decided to name Good Will Come from the Sea, their hopes for it extend beyond the restaurant itself and encompass the entire island, the entirety of the country, a brighter, fairer (read: less corrupt) world for them to live in. But there are rules, they are warned, and there are people who have been eyeing the location of their restaurant for years. Soon enough, their dream goes up in flames. Good Will Come from the Sea will never be any more than that—a dream.

Lazaros the Bow, the protagonist of the titular story, runs a taverna where his son Petros had worked until being hired away by a loud, monied man called Drakakis, under whose watch he disappears. Here, the good that will come from the sea is not some mythical hero or vague expectation, but a boy. Lazaros “closes his eyes for a moment and tries to imagine how it’ll be. How it’ll be to see Petros coming from the sea. He’ll come from the sea, that’s the only thing that’s certain. Good will come from the sea. . .” As each paragraph builds in tension and the thread of Lazaros’ hope that he will find his son grows tauter and tauter, the prose takes on a prayer-like cadence. When Lazaros yells “Peeetroooos! Petraaaakis!” it is followed three times by the statement “His mouth loves his son’s name,” and three times Lazaros wonders what a man is called once he loses his child: “What do they call you if you lose your child, what do they call you, what, what, what do that call you, what. . .” Emmerich handles these incantations seamlessly, delivering to us the speech of a man driven to the edge of reason by sorrow, the words with which he tries to summon his son back to life standing somewhere between the ravings of a lunatic and the disciplined prayer of a man of faith.

There is a story that I’ve failed to mention, because I am still trying to put my finger on it, that weaves itself through the collection. In it, a young woman ministers to an aging father with a tenuous grasp on reality who, in moments of frenzy, sees all around him signs of an impending end. “These are signs,” he says. “Just like back then, it’s the same way now, too. Only now it’ll be worse. Now the end is coming. The real, final end.” Some of the signs, echoes of stories past and presages of stories to come, are “people disappearing into caves and fish coming out onto dry land and paralytics getting up out of their wheelchairs.” A sense of disquiet is generated in the spaces between the text not unlike the disquiet we feel when we read about climate change, the pandemic, political corruption, unchecked capitalism, and economic collapse. The feeling that life is closing in on us. We are living through a present in which all around us are harbingers of the end times and yet we, much like Lazaros and Chronis and Artemis and Stavros, just keep trudging on.

Tags: archipelago books, christos ikonomou, good will come from the sea, julia sanches, karen emmerich, why this book should win


Previous post
There Are Worse Timelines [An April 2020—Is It Still 2020?—Reading Journal]
Next post
“Animalia” by Jean-Baptiste del Amo [Why This Book Should Win]