“Camouflage” by Lupe Gómez [Why This Book Should Win]

Kelsi Vanada is a poet and translator from Spanish and sometimes Swedish. Her translations include Into Muteness (Veliz Books, 2020) and The Eligible Age (Song Bridge Press, 2018), and she is the author of the poetry chapbook Rare Earth (Finishing Line Press, 2020). Kelsi is the Program Manager of the American Literary Translators Association (ALTA) in Tucson, AZ. 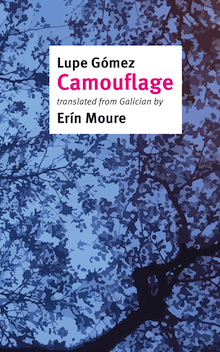 Camouflage by Lupe Gómez, translated from the Galician by Erín Moure (Circumference Books)

Author. Lupe Gómez is an award-winning Galician writer, and Camouflage is her eleventh book, published in 2017. Her work is known for “poetic confrontations with patriarchal thinking” and for “honor[ing] individual and collective life,” and she deserves great recognition in English.

Birthplace. Descriptions of the place of Gómez’s birth are central to this love letter to life in a Galician village, and the world Erín Moure shows us through her translation is one that’s little represented in literature available in English.

Concision. The story of a Galician childhood is told poignantly in brief, haunting statements: “The pianos we never had. / The songs we never sang.” Moure’s translation often creates a powerful aphoristic tone in English.

Description. Even when telling of commonplace occurrences, Gómez’s descriptions through Moure’s translation are fresh and vital. “My blood was a knot in your domed belly,” she says of her mother’s pregnancy.

Erín Moure. Moure is master poet-translator with over 17 translations and 17 books of original poems to her name. In her Galician translations (she translates from French, Spanish, and Portuguese as well), she is a champion for a language and culture with little representation in the Anglophone world. She was also a finalist for the 2018 BTBA!

Fast-paced. This book can be read in one sitting, which is not to praise the translation’s “fluidity” (a fluffy, nothing word often used when a translation is lauded for its invisibility), but rather the immersive quality of the world of the poems Moure creates in translation.

Galician. Little is translated from Galician into English, and as the poems tell us, the language is endangered: “I’m writing of the disappearance of our village of Fisteus, of the marvelous language and expressions of our people.” 40 titles across all genres have been translated into English from Galician since 2008, according to the Publishers Weekly’s Translation Database.

Hiddenness. As the title suggests, concealment is a main theme of the book. The mother is described as camouflaged, and the speaker tells how as she grows older and leaves her village, she must “Camouflage myself in a foreign country.” Moure’s translation helps the reader see what’s simultaneously hidden and visible, both for the people in these poems and on a universal scale as well.

Imagination. Imaginative language that takes the reader into the space of poetic possibility abounds in this collection. Sometimes the author recalls her inventive child-mind, and sometimes the language must simply soar above everyday usage, in Moure’s capacious English, to tell what it needs to tell.

Judicious. Moure makes thoughtful use of cognates, opting for translations that help the reader see a strong visual image. For example, “The blood of the dead was cupped / in the trough” (emphasis mine) where the verb in Galician, gardado, could be more directly translated to the cognate “guarded.”

Key. Joy is key to understanding these poems, alongside their depictions of the harsh side of life and of the “disappearance of our village of Fisteus.” The translation is suffused with the warm joy of being known in the community Gómez describes, particularly as a woman in a community of women.

Leading-edge. The avant-garde is another theme in Camouflage: “The economic backwardness of Galicia / was a form of artistic avant-garde.” As Moure explains in her translator’s note, this anti-capitalist kind of social and ecological avant-garde relates to the idea that those in the community of Fisteus take only what they need, “accumulat[ing] not cash but community.”

Mother. Camouflage is a beautiful tribute to and portrait of Gómez’s mother, and to mother-daughter relationships. The book is dedicated “To things and flowers held in the bodies of the women who preceded us.”

Neo-liberal. Moure writes: “It is a little delicate translating [Gómez’s] work into English, for English is a language used to colonize—today it might be called ‘neo-liberal’—and as such it tends to absorb other languages. I try to translate without absorbing so as to respect and maintain Galician difference.” Brava—enough said.

Openness. One of the great strengths of this translation is that it achieves a tone that is light and open, its lines full of quiet and space. Moure explains that this is a central feature of the Galician.

Publisher. Circumference Books is a new press for poetry in translation, which grew out of Circumference magazine. Winning the BTBA would bring recognition to their valuable work, which “highlight[s] the process of translation and how that work is rooted in collaboration.”

Quotes. Moure creates a strong voice in her translation, in direct quotations and in the speaker’s private confessions and recollections: “—Shall we take a photo outside in the air?”

Range. Camouflage has a large formal range, including lineated poems, prose poems, and even sections that read like lines of a play with actor cues. Other elements of form include innovative uses of the aforementioned speech cues, as well as slashes placed within the lines of prose poems.

Stealth glosses. It’s tough to add explanations of cultural terms into lines of poetry without disrupting the rhythm, and Moure integrates her annotations admirably—providing, at the same time, a gentle and important reminder that this is a translation.

Translator’s Note. Moure’s note is among the best I’ve read, creating a bridge for the reader to the poems via an overview through socio-political, historical, linguistic, philosophical, and personal lenses.

Usage. Moure’s translation finds a balance between modern expression (“Mom” vs. “Mother”) and a quality of speech in English that sets the poems in their time and place. The village seamstress’ hands “had never borne ring or jewel,” for instance.

Vocabulary. If translation is the act of making choices about someone else’s choices, Moure’s choices on a word level set these poems apart by using English’s full range to share the feeling of the original poems: “[I] was wilting in your arms” where the verb is morrer, “to die.”

Women. These poems uplift women, their ties, and their bodies, as well as the feminine in language and culture: “There are masked girls in the belly of the language.”

eXtra. Extra points to Circumference Books for putting their books, including Camouflage, online for free during the Coronavirus pandemic.

Yes. Yes, the end of the alphabet is near, but Camouflage should rise to the top because there are . . .