“The Way Through the Woods” by Long Litt Woon 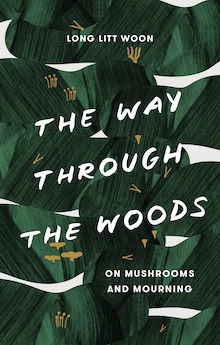 How does one heal after the death of a loved one? How does define oneself again after tragedy? Author and anthropologist Long Litt Woon responds to this question in both a profound and light-hearted way in her memoir, The Way Through the Woods.

Translated into English from the Norwegian by Barbara J. Haveland, The Way Through the Woods (2019) is Long Litt Woon’s first novel. Born in Mongolia, Woon moved to Norway after meeting her late husband, Eiolf, at age eighteen, where she still lives today. By describing her newfound passion for mushroom hunting in Norway after Eiolf’s death with an informal tone, Woon recounts how her love of mushrooms was essential during her grieving process.

The story begins with Woon describing herself as both a newcomer to the world of loss, and to the world fungi. Her husband, Eiolf, has a sudden heart attack at work, leaving her to navigate her bereavement alone, striving to set off in a new direction while creating a new path for herself. Her first few steps on this journey take her to a beginner’s mushrooming course, for it had piqued her interest previously and the class was suggested to her by a friend. The time she spent alone in the woods searching for fungi allowed her to feel at one with nature and was vital to her grieving process. Woon describes this process with simple sentences, crafting a clear visual of her time searching for various types of fungi.

Woon’s fascination with mushrooms is contagious and her adoration of the diversity, misconceptions and uses of mushrooms is easy to follow. Despite the accurate illustrations of the fungi she mentions, her descriptions of her accounts finding the mushrooms are so intriguing that it feels nearly impossible to read the book without looking up photos of the many types of fungi she speaks of throughout the book. While Woon spends many pages explaining what she learned about fungi and mushrooming culture on her road to becoming a certified mushroom inspector in Norway, she also spends precious moments reflecting upon how she healed after the death of her husband.

Her flashbacks to time spent with Eiolf enlighten the reader to the connection she experiences between mushrooming and loss. Her sense of accomplishment that came with her new title of mushroom inspector contrasts with a sense of limbo and lack of definition of being married or widowed. As Woon grows closer to her mushrooming friends, she finally feels that a new chapter of her life is beginning. The tone remains light through her narrative on mushrooming, while some of her depictions of Eiolf have a more somber echo to them.

Many of the descriptions Woon gives of mushrooms also apply to love and grief, solidifying the work as a reflection on mourning, while giving the reader a glimpse into the mushrooming community both in Norway and internationally. Throughout the novel, Woon provides incredible insight into the world of fungi and the outdoors while also commenting on the difficulties and setbacks one may experience while healing after the death of a loved one. The combination of the two gives the mushrooms a profound purpose both to the author and to the narrative structure, putting the death of Eiolf into the context of a great, new adventure.

Although the book may not inspire you to dig out some garden gloves, grab a basket, and search your local park for mushrooms, it will likely spark a heightened interest in both human nature and the outdoors. Whether it is the death of a loved one, or the ending of a relationship, Woon likens the grief she feels to the losses we all will experience at one time or another, offering a kind hand in the darkness.