All below quotes are from The End of the World Might Not Have Taken Place by Patrik Ouredník, translated from the Czech by Alexander Hertich (Dalkey Archive Press) 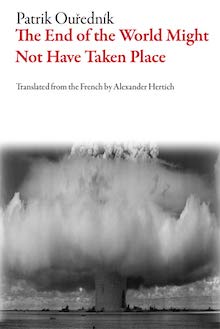 THE FUTURE OF THE WORLD

In the past, the future mainly unfolded in one of the following ways:

(1) The world would end, and everything would start again from scratch, with the creation of an identical world—the pessimistic version of most belief systems.

(2) The world would end in a horrifying and final bloodbath, from which would arise a world of bliss—the optimistic version of some religions.

(3) The world would never end, and bliss, which acted as the leavening agent, would continue to increase until the end of days, which were themselves infinitely extendable—the foolhardy version of the ends of History.

But by the beginning of the twenty-first century such theories had run their course. Forecasts had changed. All people endowed with a certain understanding of the facts on the ground agreed on one point: no matter how you imagine it, it’s going to end badly. Either in a horrible bloodbath followed by nothing at all—the optimistic hypothesis. Or by bloodbaths here and there, followed by further bloodbaths here and there, without end, until the universe expands to the point that its density reaches an infinite value, which would in turn precipitate the destruction of the galaxies and the poor miserable wretches who live there. Some observers added a supplementary aspect: a concomitant and heretofore inconceivable dulling of humanity.

Writing a book about the end of the world was a longstanding project. I’d already written a play on the same subject. It was called Yesterday and the Day After Tomorrow. But you’re obsessed, my wife said when I mentioned the idea of taking another crack at it.

I don’t think so. But I might be wrong. According to psychologists, the idea of the end of the world allows people to accept their own mortality. What’s more, the world doesn’t even have to end. They say the death of others in and of itself is soothing. To be on your deathbed and to be able to say, In any case, this is going to happen to all those stupid bastards, would bring peace to the soul.

Just as long as you don’t believe in the afterlife. Imagine! Just imagine! To run into all of them again!

Would it be so bad if humanity were to disappear? Some would be delighted. They’ve been clamoring for its disappearance for many a moon. It would lead to the liberation of other species, and the Earth would finally be able to breathe after the catastrophes brought about by the thoughtless and murderous parasites that we are.

But the subject of this book is the world.

The end of the world had been predicted numerous times over the course of human history. During the twentieth and twenty-first centuries it ought to have occurred forty-two times.

That each of these times didn’t come to pass, or at least not completely, by no means obviates the next. Quite the opposite: statistically speaking, with each failure the odds increase considerably. Ends of the world are like human births. A woman’s gestative capacity is only one in four. The three prior copulations are both necessary and fruitless.

The reasons for the end of the world were varied. The fury of a disappointed God raining down on humanity and exterminating it once and for all. The planet colliding with a near-Earth asteroid. A meteorite shower falling on Earth and causing a deadly tsunami. Asteroid collisions leading to melting polar caps. A mysterious event causing the South Pole to shift from its axis. The end of the calendar cycle leading to something terrible. Extraterrestrials armed with sophisticated weapons invading the Earth. An inversion of energy currents making the Earth pass into the fourth dimension. The Earth disappearing into a black hole created by the Large Hadron Collider. A sudden end to the magnetic field allowing solar winds to penetrate the atmosphere. The Earth’s atmosphere suddenly blowing into space, and the oceans drying up. Have you had your breakfast yet?

According to an American think tank, there was only, both presently and symbolically, one minute until the end of the world. The organization brought together researchers who year after year entertained themselves by evaluating the more or less negligible chances of humanity’s survival. When it was looking its best, at the beginning of the 1990s, humanity had seventeen minutes to live.

The researchers justified their prediction of “extraordinary and undeniable threats” stating it was due to “unchecked climate change, global nuclear weapons modernizations, and outsized nuclear weapons arsenals.”

They forgot, please see above, the wrath of God, who is always liable to try out new methods.

Purchase The End of the World Might Not Have Taken Place from your local bookseller, or via Bookshop.org, where proceeds from the sale via Chad’s Bookshop store will go to the Book Industry Charitable Foundation.


Previous post
. . . The Underappreciated Masses . . .
Next post
“Space Invaders” by Nona Fernández [Why This Book Should Win]