“The Catalan Poems” by Pere Gimferrer [Why This Book Should Win]

Henry N. Gifford is a writer, emerging translator from German to English, and Assistant Editor at New Vessel Press. 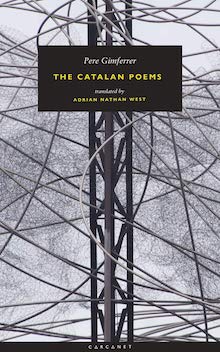 The Catalan Poems by Pere Gimferrer, translated from the Catalan by Adrian Nathan West (Carcanet)

It’s possible that the titles of Pere Gimferrer’s collections alone—from 1970’s The Mirror, through Apparitions, and Light, to 2014’s The Castle of Purity—evoke the spirit and development of the Barcelona-based poet’s work more effectively than I could ever hope to. The Catalan Poems’s table of contents, that list of titles, selections from the aforementioned collections, translated by Adrian Nathan West as gorgeously and precisely as the poems they foretoken, is a poem in itself that, making a stronger claim than I can for why this book should win the Best Translated Book Award. The elemental titles of the poems—“May,” or “Vision,” or “Bell”—speak to the effort towards the essence of things that occupies Gimferrer through his career. “There is a poetic truth deeper than scientific or material truth,” Gimferrer writes. But that poetic truth is not antithetical to material truth. For Gimferrer there is great overlap between the real and the ideal.

A single noun in isolation, like “Bell,” is a beautiful illustration of this overlap. A poem, Gimferrer convincingly suggests, may in fact be an attempt to use many words when one will do. As the final lines of his 1978 poem “Light of Velintonia” put it: “The word of a man makes visible the real: / in the light, we may see the garden as garden.” His succession of images, his use or eschewal of imposed form, his sometimes straightforward declarations or descriptions, come together and succeed greatly at just this, making visible the real. I am grateful to witness the success of a poet with as great a vision as a style.

It can be useful to know what a poet believes about poetry, to see first of all whether we agree, and second whether the poet follows their own prescriptions and achieves their own goals. It can be equally useful to examine a poem up close. Gimferrer’s 1980 collection As an Epilogue, from which 15 poems are included in The Catalan Poems, offers among its very short poems a beautiful opportunity for both useful exercises: a two-line poem entitled “Poetic Art”:

More than the bestowal of synthesis:

to see in the light the transit of the light.

I agree with Gimferrer, that the bestowal of synthesis, the Metaphysical Poets’ “most heterogeneous ideas … yoked by violence together” of which Dr. Johnson disapproved and which T.S. Eliot reclaimed, for instance, is part but not all of poetry, perhaps necessary but insufficient, in the useful language of statisticians. Eliot himself, especially in The Waste Land, the poem of fragments promising (though often withholding) union, seems to crop up quite frequently in The Catalan Poems, especially in “Deserted Space” with the reference in its first few lines, if West’s translation is to be trusted, to “cruel / spring”—despite the greater acknowledged importance of Pound and Stevens (I rarely fully believe a poet’s prose, anyway).

I agree also that any purpose of the bestowal of synthesis, as imagists like the young Ezra Pound knew, was to capture something about time—moment and movement. The point of seeing the light is to see the transit of the light, to see the most true sense of the light as a thing with two termini and a path in between them, not the shadow only, but the form casting the shadow. Many poets have attempted to capture this, and many philosophers have failed even more dramatically than those poets. Gimferrer succeeds to a great extent in addressing and displaying the ideal reality of “the persistence of atemporal time” (“Light of Velintonia l. 14). He achieves in that two-line “Poetic Art” the bestowal of synthesis—of synthesis itself and light—as well as the perception of the transit of the light. At the close of West’s interview with Gimferrer in this volume, the poet and translator discuss abstraction in poetry. West remarks that if poetry is “abstract, there’s not really a hermeneutic entryway.” Gimferrer acknowledges the importance of abstraction in poetry, for which he credits Rimbaud, and says, “This was revolutionary, and its effects are evident in certain of my poems.” Its effects only, and certain only. I find Gimferrer delightfully, graciously interpretable, but with some work. Without the work, there is an abstraction to them that nevertheless succeeds in its poetic aims. For this reason, among so many others, this book ought to win the BTBA for Poetry.

At the close of The Catalan Poems we find a selection from the poet’s Dietari 1979—1982, a series of elegant brief essays, both diary of Gimferrer’s literary life and artistic dietary for his ideal reader. The Dietari include a story about an aging Mallarmé delivering a toast at a banquet; pithy crepuscular anecdotes about Ruskin, Monet, and Paz; and an essay on the morality Georges Simenon and John Le Carré. West spares none of his rhythmic brilliance or creativity in all types of rhyme in his translations of these prose pieces: “Like sheaves of wheat, we await the hour of final silence. Further afield, the reaping goes on into the evening,” he translates Gimferrer in a meditation on personifications of death by way of Wallace Stevens. Tolstoy’s death during a sudden inspired train journey is, we are told, “moving.” These brief essays are a blessing for those of us looking to understand the poems we have read. They are beautifully written, translated with remarkable insight, and offer us access to something profound, true, instantaneous and eternal: poetry.


Previous post
Indie Rep Night at the End of the World
Next post
TMR 11.11: “The Dream Ends” [THE DREAMED PART]