“The Cheffe: A Cook’s Novel” by Marie NDiaye [Why This Book Should Win]

Marcel Inhoff is completing a doctoral dissertation at the University of Bonn. He is the author of the collection Prosopopeia (Editions Mantel, 2015), and Our Church Is Here (Pen and Anvil, 2018) as well as numerous poems and essays in German and English. He is currently working on his first novel. 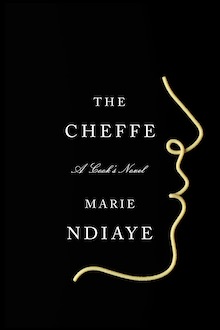 The Cheffe: A Cook’s Novel by Marie NDiaye, translated from the French by Jordan Stump (Knopf)

Marie NDiaye’s gifts as a psychologically acute observer, a novelist with exceptional skill in depicting characters at an extraordinary depth and vividness have been well observed and described. The Cheffe: A Cook’s Novel is one more in a row of widely acclaimed novels about all kinds of characters. This one is about a cook who rose from rags to riches, not without being profoundly uncomfortable about the whole affair. The descriptions of her tumult, her growth, of the way she came to become a cook, through an accident, the sumptuous descriptions of her delight in the art of cooking, of her shame of her upbringing, all of this is masterfully evoked. Except—we see it all indirectly. The Cheffe does not speak with us—we hear the voice of a seemingly devoted narrator who works with and admires her, a factotum, almost.

It is tempting to read this novel entirely as a biography of the titular cook. After all, NDiaye fills her novel with extraordinary elements. There is the sense of class—the shame of one’s roots, and the quiet, but conflicting pride in having elevated one’s craftsmanship to such a prominent level as the Cheffe has. Cooking is, like writing, a craft that best works with an audience: readers, eaters. And the moment of reading, eating, is central to the book’s most pivotal moments. She finds herself a cook because she works in the kitchen of a rich, strange family, and is suddenly afforded the opportunity to take over duties as head chef. So she, already dissatisfied with the previous cook’s work, works out her own dishes and impresses her employers, the strange Clapeau family. Another such moment presents itself when she cooks refined dishes for her parents, who do not like their daughter’s vaunted cooking skills. At this point, we know that “refined” doesn’t mean “pretentious” in the dismissive sense of the word. The Cheffe has genuinely elevated her craft—and her palette in a way that shifts her sense of place and class so much it creates a rupture with her origins. As Pierre Bourdieu noted about himself: a second habitus has developed, and a shift has taken place, which the Cheffe finds disturbing.

Without unnecessarily going into details, this is the rift that motivated the self-examination at the heart of some of Didier Eribon’s recent work, most famously the Return to Reims, and it is not overall uncommon in literature. What is different here is the way NDiaye presents her female protagonist at the levels of the process—she is the head chef, a position unusual enough and important enough for the book that Jordan Stump’s translation has preserved it as the book’s title. It is an unusual choice—the Grand Robert, the Merriam-Webster of the French language, recommends turning the customary “le chef” into “la chef”—but that is not an option here. What’s more, the mastery of cooking—and the concept of mastery per se—is still understood as inherently male. 77% of professional chefs in the US are male, while home cooks are majority female. The difference here is written into the title of the book and its protagonist. She is one of modern cooking’s auteur chefs—with specific, painstakingly created, unique signature dishes, and the kitchen doubling as a “room of her own.”

One has to admire the book’s style, well translated by Jordan Stump, of what could maybe be called exact sumptuousness—a style that perfectly conveys the seductiveness of cooking, the richness of flavors and scents, the attraction of each individual element that composes a great dish, without decomposing into faux-baroque mush, a danger in books about the senses. This skill is heightened by the fact that all this description is wrapped around the simpler, sometimes strangely whiny discursive language of the narrator, a former cook in the Cheffe’s restaurant, hopelessly infatuated with his boss, and still writing, from his elegant retirement home, with a gesture of longing and admiration. His language is halting, self-correcting, searching, and contra many reviews of the novel, it is this narrator that elevates NDiaye’s novel above many of its contemporaries.

NDiaye has long been suspicious of autofiction and autobiography. Not belonging to the community Léonora Miano’s Afropeans, or at least not overtly identifying with them, she has often described herself as French, her Senegalese roots not as central to her identity as her interlocutors and reviewers like to make them, at least, not explicitly. In her work, her heritage and background shines through in much of her best work—but how does it relate to the “Cheffe” at the center of the work? In what I think is her most underappreciated work, the Autoportrait en Vert, NDiaye offers a strange hallucinatory search for a self, an apparition. The book is a challenge to readers, a book at odds with some fashionable assessments of what autofictional literature can, and maybe should, do. It is literally an evasive book—a chase for a phantom.

In The Cheffe, Marie NDiaye writes about a woman who does not want to be defined by her biography, who does not want pictures taken of her face to overshadow the work she produces. The Cheffe wants her work to speak for itself, her dishes to be tasted without being seen as reflections of any specific person. This fact is so central to the book that the narrator begins by explaining it to us before pushing aside any such concerns, before digging up and uncovering the biography of someone who hated being so uncovered. His doubts and thoughts are constantly with us. It is a mistake to read Marie NDiaye’s novel as a psychological portrait of the cook alone or even primarily. It is a portrait of the act of biography, the epistemological violence of dragging an author into a spotlight not sought by them. It is by no means an accident that this factotum, this insistent biographer is male—and that he pushes himself to the front of the picture, so that we never see the Cheffe without also seeing him, and his woeful inner torment. In French literature, this ponderous male voice is common—for example, it is all over Laurent Binet’s HHhH, a biography of Reinhard Heydrich and his two assassins. Not content to write the story of the assassination, Binet also writes the story of writing the story—including a discussion of other books being written about the topic and why his project is superior, more truthful, better.

It is difficult not to read The Cheffe as a novel not just about female ambition and success, not just about class and power, but a book about how interwoven our knowledge of the world is with the masculine push to dominate narrative. As in Autoportrait en Vert, here, too, Marie NDiaye offers us a chase—and a trap. The Cheffe’s psychology is given to us by the narrator, and the narrator alone. This is not about him being reliable or unreliable—it is about him being a central character of the story. Patriarchal constructions of narrative history as well as masculine dominance of literature mean that we must always be careful around these tales of female lives told to us by men. And where we must be most on our toes is about stories about female relationships with other women, in stories written by men. And so NDiaye includes a difficult relationship, between the Cheffe and her daughter, but makes sure we understand the extent to which this relationship is refracted through the eyes of the narrator.

And yet, despite all this metafictional finesse, this cleverness, this, even, bitterness of Marie NDiaye, a cheffe herself struggling with the narratives draped upon her shoulders, the book is never bogged down. Often, you have to choose—some of the clever books praised by reviewers and readers for their intelligence offer little in the way of story and characters, falling back on the bare bones of cleverness and conceit. This is not the case here. The book is never less than richly readable, engaging, a brilliant book by a great storyteller and a sharp thinker.


Previous post
“The Wind That Lays Waste” by Selva Almada [Why This Book Should Win]
Next post
Season Twelve of the Two Month Review: “Cars on Fire,” “Four by Four,” and “The Book of Anna”