Starting in 2021, Open Letter will be launching a “Polish Reportage” series. This came out of a trip I made to Krakow back in 2017 (when the Astros cheated their way to a World Series, which, remember when that mattered?) to attend the Conrad Festival and meet with a variety of authors, editors, and the like. I’ve always been a fan of Kapuściński, and there’s something about the particular techniques of Polish Reportage—especially the focus on the individual, the small story, to illustrate larger social/cultural issues—and although there are a number of works of reportage that have gotten some really good attention of late (such as How to Feed a Dictator by Witold Szablowski, translated by Antonia Lloyd-Jones), there are dozens of fascinating works that deserve to be accessible to English readers. 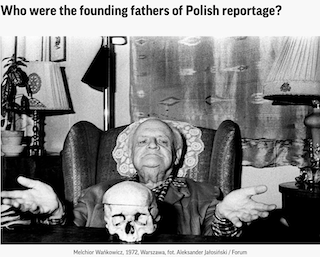 Unfortunately, most of the time when Polish reportage is written about (such as here), the focus falls on the major male writers of note. Kapuściński, Melchior Wańkowicz, Wojciech Tochman, Artur Domosławski, etc. Not that these writers aren’t all very interesting, and worth reading, but the influence of the founding mothers of Polish reportage—and their “daughters”—tend to be overlooked.

I’m not any sort of expert on this (or anything, really), but I thought for the second day of Women in Translation Month, it would be interesting to highlight three works of Polish reportage by women writers—including a forthcoming one that, if I’m being completely honest, prompted this post. 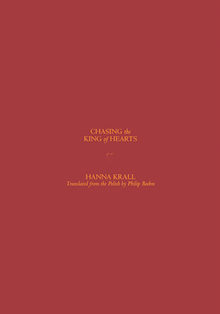 Chasing the King of Hearts by Hanna Krall, translated from the Polish by Philip Boehm (Feminist Press)

A contemporary of Kapuściński’s, Hanna Krall is one of the few women who do get name-checked in articles about Polish reportage, and with good reason. A survivor of the holocaust, Krall has written a lot about World War II, including what’s arguably her most famous book, Shielding the Flame (sadly out of print) which is subtitled: “An Intimate Conversation with Dr. Marek Edelman, the Last Surviving Leader of the Warsaw Ghetto Uprising.”

Chasing the King of Hearts tells the story of Izolda, and her harrowing experiences in the concentration camps, and her desperate search to find and help her husband after he’s sent to Auschwitz. It’s a very powerful book, and masterfully translated, which is why it received the 2018 English PEN Translation Prize. (Full disclosure: I was on that jury along with Will Evans and Julia Sanches.)

I can’t find my copy here (probably at the office), but if I remember right, Krall gives a bit of the history behind how this book came to be and admits that this is essentially a rewriting of a book she had been commissioned to write, but which never never saw the light of day. I might be inventing half or more of this story, but “Izolda” wanted Krall to write a book that would become a major movie. That’s not the book Krall wanted to write, and after Izolda passed, she reconstructed the work, paring it down and employing her more traditional, journalistic techniques.

What’s kind of funny about the reception of this book—which points to some of the issues regarding Polish reportage and Western-style hard journalism—is that no one really knows if this book is a novel or not. On the Feminist Press page, the description starts “in this canonical work of Polish reportage,” and is followed by this blurb from the Sunday Times about “this strange unsettling novel.” Even Publishers Weekly put it in their Best Fiction Works of 2017 . . . 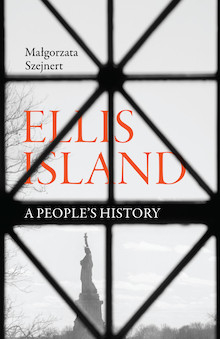 Also born in the mid-30s, Malgorzata Szejnert co-founded Poland’s leading daily newspaper Gazeta Wyborcza and led its reportage division for 15 years. Her first works started appearing in the early 1970s, but this is the first book of hers to be translated into English.

When we first set about crafting the Open Letter Polish Reportage series, we talked with Sean Bye and Antonia Lloyd-Jones about which titles we should focus on first. (Sean actually translated the first book in our series, Foucault in Warsaw, which is coming next spring.) Sean had told me quite a bit about this book, a giant account of testimonies, memoirs, photographs, and letters that bring to life all of the varied experiences of arguably the most famous landmark of immigration in the world.

Words Without Borders published a section of this book last week (the book comes out tomorrow), which is definitely worth checking out:

That is precisely what takes place on the island. After entering a large vestibule on the ground floor of the station’s main building, the immigrants climb up one floor, under the watchful eye of doctors who, as we already know, wear military-looking uniforms. People arriving from the subjugated nations of Europe fear nothing and no one more than men in uniforms, who embody oppression in their towns and villages—so they do everything to stay out of sight: hiding behind someone taller, disappearing into their coats, or covering themselves with their bundles. These naive methods have been quickly discovered, catalogued, and laid out in instructions, and the doctors know exactly whom to pull out of the crowd for further investigation.

A medical inspector giving the immigrants a quick visual once-over must pay attention to six elements: the skin of the head, the face, the neck, the arms, the gait, and their general condition—physical and mental.

If any of the above is invisible to the naked eye, the doctor will stop the immigrant to make sure there is nothing suspicious going on.

A high collar. This must be unbuttoned to check if there is a goiter or an ulcer lurking underneath.

A hat. Often used to cover ringworm or mycosis.

A thick head of curls. As above.

A cap pulled low over the eyes. This could conceal conjunctivitis or trachoma.

A hand hidden under a coat, a scarf, or a bag. The limb may turn out to be deformed, paralyzed, missing fingers, or afflicted with tinea.

Luggage. This can be used to conceal deficient posture. The immigrant must lay their bags on the ground and walk about ten feet without them.

Children above the age of two clinging to their mothers. The mother must proceed as above.

It is calculated that on days with larger intake, when Ellis Island accepts four to five thousand people, each doctor has more or less six seconds to visually scan a single person. The medical inspectors, also known as “line inspectors,” are increasingly known for their “six-second physicals.” 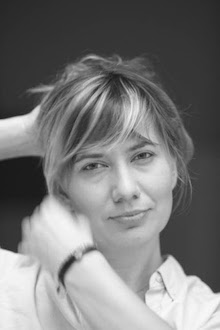 Ganbare! Workshops on Dying by Katarzyna Boni, translated from the Polish by Mark Ordon (Open Letter)

And here’s the book that set this post in motion . . . I just finished editing this last night and man, I’m blown away. This is Svetlana Alexievich level good. (Having been involved in the publication of Voices from Chernobyl, I feel justified in making this claim.) There’s a reason it won the Gryfia Award for female Polish writers. It was also nominated for the Conrad Award and the Ryszard Kapuściński Award for literary reportage.

Broken up into three sections, Ganbare! details the twin tragedies of the tsunami that hit Japan on March 11, 2011, and the ensuing Fukushima nuclear disaster. Although I’ve been reading about these events all summer—starting with Andrés Neuman’s latest book, Fracture—but this is by far, the most comprehensive, most compelling account of how these horrific events impacted the people of Japan. From details about the cremation process—and the inability to keep up with the dead bodies after the tsunami—to the overwhelming number of ghosts and spirits that wrecked havoc in the region, to the hour by hour breakdown of the Fukushima event (which would make an incredibly tense movie) to the ways in which the government obfuscated the dangers of exposure to radiation, this book brings to life so many different perspectives and individual stories in a way that’s both a gut punch and hard to put down. (The final section on the “Workshops on Dying” messed me up a bit.)

This won’t come out for another year, but when it does, I think it’s going to get an exceptional amount of attention. We’re working on the possibility of producing a multi-part, scripted podcast speaking with experts and reporters about some of the aspects of these tragic events. There’s so much to go into, and, if done right, this could be a really engaging way to promote the book itself. (And I’m already excited to read her new book that just came out in May about a planned utopia in the south of India.)

If you want more information of Polish reportage, I’d recommend this overview and Sean Gaspar Bye’s list of ten Polish non-fiction books in translation. Additionally, I did a podcast with Sean and Antonia about this subject that’s also worth listening to. (And includes Chasing the King of Hearts.)

And you can find all of the Women in Translation Month posts by clicking here.