“The Great Passage” by Shion Miura 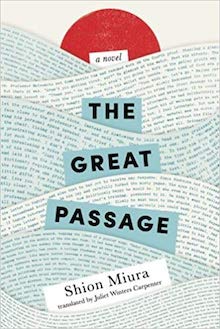 Shion Miura’s The Great Passage chronicles the construction of a dictionary also called The Great Passage, which is a comprehensive catalog of the Japanese language, the completion of which is a defining moment both professionally and personally for all involved. Yet, more than any other narrative thread, this book is centered around how words affect the human experience.

Written in third person limited, the character upon which the narration is focused changes throughout the text. This makes each character more individually accessible since the reader is allowed into the minds of multiple people and thus sees the story through the many perspectives that shape the work into a cohesive whole despite the shifting focus. Where one character might misinterpret the actions of another, and readers can see both perspectives of the exchange, which allows for a fuller narrative. This falls in line with a major theme of the book: that words enable mutual understanding of complex ideas and emotions. For example, multiple characters reflect on how the protagonist, Majime, has trouble expressing himself, as can be seen when reading Majime’s own perspective.

The split narration provides an advantage in many places throughout the book, as there are places where time skips. This switch in perspective to each new character’s internal reflections indicates this passage of time to the reader, and enables them to contextualize themselves in regard to how the narrative takes shape.

The book actually starts not with Majime, but with Kohei Araki, who wants to find someone as passionate as he is about dictionaries to replace him when he retires from the Dictionary Editorial Department. Not only does he want to leave the department in good hands, but Araki seeks someone who will continue to work on The Great Passage, which is a massive undertaking.

Aside from Araki, the characters who are most alive in the text are Nishioka and Midori Kishibe. Nishioka, an employee at the office who seems to simply do the bare minimum, is at first portrayed as careless and a bit of a womanizer before the reader is allowed into his perspective, and slowly, a hidden depth is revealed as Nishioka matures and the reader spends more time within his mind. In contrast to Nishioka, who is developed through viewing snippets of his consciousness from near the beginning of the text, readers are introduced to the character of Midori Kishibe late in the book and spend an entire chapter (out of five total) inside of Kishibe’s mind. Kishibe’s observations are meant to supplement Majime’s narrative, but in the process, readers are taken in to her world, and at the end I found myself much more invested in her story than that of Majime.

The plot of the book is mostly concerned with the making of the dictionary, with the aforementioned dips into the personal lives of the characters—primarily the development of Majime’s relationship with Kaguya, who works as a chef at a frequently visited restaurant and is the granddaughter of Také, Majime’s landlady. That said, the romantic relationships are, while important to the plot of the text, not nearly as engaging as the friendships and bonds created through the construction of The Great Passage, and the commentary that the book itself makes on the power of words.

As a non-speaker of Japanese, I would have been hopelessly lost when reading a text about the making of Japanese dictionaries were it not for the thoughtful explanations that I can only assume are the work of the translator, Juliet Winters Carpenter. Each time the use of a particular word had a special significance that would inform a character’s actions or intentions, there was a short expansion of the utterance that explained the use of the word and the implications of its use. These expansions fit so well into the English text that it was only because I was paying particular attention to these parts of the story that I even noticed them, they so little affected the narrative flow.

More than any other book I’ve read, The Great Passage has made me consider the cause and effect that words have on a person through every waking and dreaming moment, and its focus on the effect of dictionaries as keepers of a culture, able to either build bridges or build walls between the past, present, and future of a language and therefore community, took my breath away when reading. The Great Passage is interwoven with romantic love stories, but ultimately it is the passion of the characters, their friendship and their devotion to their task that direct and complete the narrative and turn it from simply a good book to a great one.

One response to ““The Great Passage” by Shion Miura”