“Before Lyricism” by Eleni Vakalo [Why This Book Should Win]

This morning’s entry in the “Why This Book Should Win” series is from BTBA judge and Riffraff co-owner, Emma Ramadan. 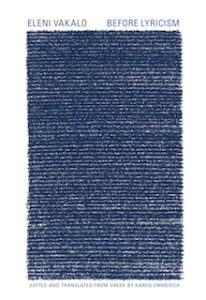 I would happily and readily make the argument that of all the books on the BTBA poetry longlist this year, Eleni Vakalo’s Before Lyricism was without a doubt the most difficult to translate. Made up of six book-length poems, the poems in Before Lyricism get at a version of reality that can only be accessed by making someone hear and see an image through the written word.

If I pretended for so long to be writing poems, it was only so I could speak of the forest.

These poems don’t have a setting or a thread of movement. The most accurate thing would be to say that these poems are set in Vakalo’s mind and in our minds and nowhere else. Poems that seem to start out as straightforward descriptions peel apart in our hands as we read, every line taking another layer with it so that what we are left with is a series of jarring images that reverberate with an energy of abstraction. Her translator Karen Emmerich describes in an excellent interview for Tupelo Quarterly, “That’s what all of reading Vakalo feels like to me: being in the sea in a moment of utter calm, and then finding that the water I’m standing in is so many more things than I thought—and the calm of the sea and of me becomes host to an undercurrent, if not of fear, then of astonishment at the unfamiliar.”

Vakalo pushes the Greek language to its limits, stretching its syntax and playing up its room for ambiguity. As Emmerich elaborates in her translator’s note at the end of the book, “Before Lyricism is intensely inward-looking in its disruption of conventional grammar and syntax, which render it resistant to familiar modes of translation . . . Greek is an inflected language in which word endings indicate grammatical function . . . Writers can manipulate these elements in such a way as to push their texts to the limits of intelligibility . . . Vakalo does just that: she intensifies the particular forms of grammatical ambiguity available in Greek by recasting its syntax in unexpected ways.”

Emmerich spent over a decade translating these poems. The difficulty, she says in her Tupelo Quarterly interview, is that “what Vakalo is doing in this regard simply isn’t something that English can do. The languages aren’t the same. In many places, given the tyranny of the word order in English, there are clear subjects or objects for my verbs, in places where there aren’t for hers. What I tried to do instead was just let other forms of ambiguity exist, syntactical, grammatical, interpretive . . . I wanted there not to be a clear image, always, but rather a sense of something . . . I just had to let myself go, mess with all the pieces and make something I thought was equally disturbing, mixing issues of innocence and guilt in a similar way of effacing the boundary between actor, action, and effect . . . Yet the cumulative impression is somehow still comprehensible. There’s a point, a thing to understand but not untangle.”

Striking the spider
The spasm as it falls
And its legs contract and tangle
In three closed corners
The whole spider shrinking
Death when it suddenly comes
With a swift pain from the strike
And that power you have in your hands
The image of these moments gathers
As passing you saw it on the wall
Creeping with its eight legs
In an odd rhythmic arrangement
The rapid change
In the scene, starting with the strike,
Transforms the innocent into intent.

Emmerich’s stunning translation is nothing short of miraculous in its ability to evoke the same feelings of both alarming confusion and immediate comprehension in her English readers as Vakalo was able to evoke in her Greek readers. This book shimmers with a new layer of reality, with new poetic possibilities, and it is a gift to English readers to be able to access both.