Final entry today in the Why This Book Should Win series is from BTBA judge and curator of “Reader-at-Large,” Tara Cheesman. 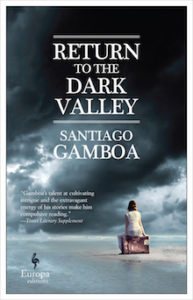 Return to the Dark Valley by Santiago Gamboa, translated from the Spanish by Howard Curtis (Colombia, Europa Editions)

One of the characters in Return to the Dark Valley is a “crazy and eccentric Argentinian,” a possible sociopath, who says he is the bastard son of Pope Francis and has renamed himself Tertullian, after the father of Latin Christianity. While he narrates sections of the book, he is only a supporting actor in Santiago Gamboa’s complicated plot, a masterpiece of manipulation which unfolds over four hundred and sixty-one pages. Tertullian is one of five different narrators, each with his or her own distinctive voice and history, who provide the many stories which come together to form what we gradually realize is, when distilled down to its essential form, a thriller. Albeit a wonderfully literary one.

At its center is the man known affectionately as “the Consul” who has travelled to Spain at the request of Juana, the woman with whom he has an intimate, yet undefined, relationship. (Both characters appear in an earlier novel by the same author). While waiting for Juana in Madrid he meets another young woman, Manuela, who in an act very like the Catholic sacrament of confession, reveals to him her story. Eventually Tertullian will add his voice to this fragmented tale, as will a priest turned armed militant. And the 19th-century poet Arthur Rimbaud—whose name came up in more than one book eligible for this year’s prize—also plays a part, in the form of meditations kept by the Consul in a notebook. Rimbaud’s biography is spread across the novel and forms its connective tissue.

It seems an unlikely combination. Until you realize they are all expatriates, fleeing or having fled violence at home. Brought together, by way of tenuous connections and a shared human condition, to help Manuela make peace with her own violent past.

Return to the Dark Valley is as close to being a flawless book as anything I’ve ever read. That’s a bold statement, I know—but to find a book that is well made, so solid in its construction, is rare. Gamboa is a writer who has complete control over his medium. Every sentence, nuance and emotional beat carries weight. He’s created characters who are substantial—with identifiable mannerisms, voices, and vocal rhythms. The pacing is absolutely perfect. The violence, and there is more than a little violence, is visceral but not overdone (similar to how it is used in the movie Sicario). The prose is rich, but restrained. Howard Curtis’ translation is a pleasure to read. Below is a quote chosen at random from the many passages I marked while I was reading, just because it felt both beautiful and real.

The day is marked out with floating buoys you have to make an effort to reach: lunch, dinner, sleep, breakfast. Anyone who waits—this text is full of unbearable waits—feels the passing of time and its speed in a physical way. It is slow and laborious.

I don’t know who felt the weight of this stillness most, Manuela or me; what is certain is that by always being in the house—except for my brief morning excursion for provisions, which Manuela denied herself for fear that someone might recognize her—each of us ended up marking our territory, and she practically imprisoned herself in her room.

Challenging. Haunting. Readable. Written by an author and craftsman of undeniable skill, this is a book that expands or contracts in scope depending on its reader. That kind of adaptability and universality in an author—combined with such skillful and creative storytelling—should be celebrated. Which is why I believe Return to the Dark Valley should win.