“Ebola 76” by Amir Tag Elsir [Why This Book Should Win]

Today’s first entry into the Why This Book Should Win series is from Riffraff co-owner, Three Percent podcast co-host, and French translator, Tom Roberge. 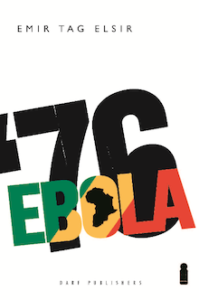 Sudanese writer (and doctor) Amir Tag Elsir’s short novel Ebola 76, translated from the Arabic by Chris Bredin and Emily Danby, is a beguiling piece of fiction. As its title suggests, the narrative traces the initial spread of the Ebola virus in central Africa, from the Democratic Republic of the Congo (then known as Zaire) to southern Sudan and beyond. But it’s nothing like the other outbreak narratives offered to the world, whether in books or movies. There are no heroes. There are antiheroes. Lots of them. There is a somewhat anthropomorphized virus, eager to sow wreck and ruin, having fun along the way. There’s plenty of misery and suffering, but it already existed, had existed for decades and maybe even centuries before the virus showed up. The virus simply piles on, bringing unhappy lives to quicker ends. There’s no camaraderie. No banding together in the face of overwhelming, inconceivable carnage. No putting aside of differences or petty squabbles in order to cooperate. Instead there’s blame, rumor-mongering, self-interest, and isolationism, with a dash of casual disregard for consequences.

All of which is to say that this is perhaps the most genuine portrait of a viral outbreak ever conceived. Empathy and selflessness are wonderful traits to aspire to, especially in times of crisis such as this, but that doesn’t necessarily mean they kick in the second a tragedy strikes. And certainly that urge is made more difficult to catalyze when the crisis-stricken society has been taking a beating for so long that hope and optimism in everyday life are almost non-existent, never mind during a crisis.

Colonialism started it all off for these people, that much is obvious, even if this fact is never overtly expressed in the book. And post-colonial Africa was of course riddled with corruption, internal wars, and economic ruin. Education was a privilege for most and the vast majority of citizens had no chance of upward mobility through honest means. Life expectancies were horrifyingly short and infant mortality rates horrifyingly high. To get all of this across, to imbue it in the story without recounting it in history-textbook-style, Elsir employs a masterful ability to color his character’s thoughts with the subtle influences of history, distant and recent. It reads as black humor (which, for the record, is really, really well done and really funny in its own dark way) and widespread pessimism, a coping mechanism for these people in the face of their suffering, old and new, but upon closer examination it reveals these characters’ unshakeable distrust of the world they live in. It’s sad. Beyond sad, it’s also an honest account of an undeniably tragic time and place.

Has any of the preceding convinced you that this is the book that deserves to win this year’s Best Translated Book Award? I suspect no, so I’ll close with an assertion that this book doesn’t exist to be praised for its narrative flights of fancy or stylistic flair or its translation. It’s not that it doesn’t do these things astonishingly well, it’s that they are used in service of pointing to something important and intriguing beyond the pages of the book itself. This is not a book about the life of the mind, this is a book about the diseased blood coursing through our hearts.