“Compass” by Mathias Énard [Why This Book Should Win]

This entry in the Why This Book Should Win series is from former BTBA judge and founder of the Literary License blog, Gwendolyn Dawson, who lives in Houston, TX and is a practicing lawyer. She is a longtime supporter of literature in translation and all literary arts. 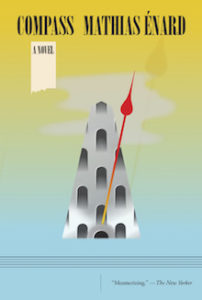 Mathias Énard’s Compass is a novel of ideas, or more precisely, a novel concerned with exploring a single idea: Orientalism—a concept often associated with Edward Said’s seminal 1978 book of the same name. In its simplest formulation, Orientalism is a way of looking at the East (namely, the Middle East and Asia) from a Western (European or American) perspective. In recent years, the term has come to be associated with colonialist attitudes and Western stereotypes of Eastern culture as exotic, uncivilized, passionate, and dangerous. In other words, this novel could not be more relevant and important to our current global challenges.

Compass’s 400+ pages contain very little in the way of typical plot and characterization. Énard eschews these traditional elements to make room for an extended exploration of Orientalism, both past and present, and to suggest new ways of thinking about the intersection of West and East. The novel is framed as one night in the life of Franz Ritter—an aging musicologist living in contemporary Vienna. Franz spends a sleepless night at home after receiving a vague and unsettling medical opinion that he might have a serious, perhaps fatal, illness. More tests are needed to reach a diagnosis. In this in-between state of knowing but not knowing, Franz spends the night mentally cataloging his memories. Structurally, Compass harkens back to Proust’s In Search of Lost Time. Like Proust’s masterpiece, Énard is not interested in presenting a chronological narrative. Compass meanders, moving in and out of significant events over several decades in Franz’s life.

As a specialist in European music with Oriental influences, Franz has traveled throughout the Middle East, befriending a number of Orientalist scholars and falling desperately in love with one of them. Franz’s reminisces serve as the scaffolding for the intellectual work of the novel—mainly, to deconstruct existing views of Orientalism and to suggest alternatives. Rather than the common understanding of Orientalism as a Western projection of the East, Énard (through Franz’s beloved, Sarah) suggests the view that Orientalism can be thought of as a “common imaginal world” composed of open dialog and exchange between East and West, leaving both sides to be equally perceived, influenced, and changed.

Compass is filled with details of historical events, points of scholarship, biographies of famous people, and allusions to art, music, and literature. Énard demonstrates such an impressive facility with historical and cultural references that I initially assumed he must be making some of them up for convenience. After finishing the novel, I spent several happy hours looking up many of the references, all of which turned out to be entirely real even if previously unknown to me. I was completely unfamiliar with the connection between certain notable Orientalists and the Nazis, for example, and I knew nothing about the German attempt during World War I to spark a jihad by Muslims against England, France, and the other Allies. In addition to its other pleasures, Compass is an education.

The danger for discursive, serious books filled with lofty intellectualism and historical facts is that they are lifeless. Such books may be educational and intellectually stimulating, perhaps, but are often unable to inspire an emotional connection with readers. Compass is saved from this fate by a love story—Franz’s (mostly) unrequited love for Sarah. Sarah captivates Franz. She is a Western-educated Orientalist, but Franz also associates her with Eastern elements. In a way, Sarah becomes Franz’s Orientalism, an intersection of West and East that Franz is unable to fully comprehend or possess.

The episodes involving Franz and Sarah are carefully crafted set pieces, filled with rich details and emotional tension. In one scene, Franz and Sarah spend a night outdoors in the desert at a historical site near Palmyra, Syria. They share a blanket in the frigid cold under the stars. Sarah sleeps, but Franz is kept awake: “an immense desire, which I managed to stifle, consumed me despite everything, in silence.” The novel contains many scenes like this one, smoldering with sexual tension and frustration. Franz’s obsession with Sarah is all emotional irrationality, providing a welcome counterpoint the novel’s more cerebral elements.

I cannot end this piece without also mentioning Charlotte Mandell’s impressive translation. The novel’s language is complex, precise, and layered, occasionally tending towards academic formality. A lesser translator could easily have produced a dense and impenetrable translation that would be no fun to read. Fortunately, Mandell is one of our best translators. Here, she captures the novel’s complexity while still maintaining the momentum of Énard’s prose.

If you need any more reasons to read this book, consider that it already won the prestigious 2015 Prix Goncourt in France. Compass is currently shortlisted for the 2018 Albertine Prize, to be announced on June 6, and was shortlisted last year for the 2017 Man Booker International Prize. Add to that its place on this year’s long list for the Best Translated Book Award, and it is difficult to find another book as worthy of your close attention as Compass.