“The Last Bell” by Johannes Urzidil [Why This Book Should Win]

This entry in the Why This Book Should Win series (almost done!) is from Abe Nemon who writes essays and reviews of old and out-of-print books at OldBookAppreciator.com, as well as daily bios of obscure authors on their birthdays on Twitter at the handle @bookappreciator. 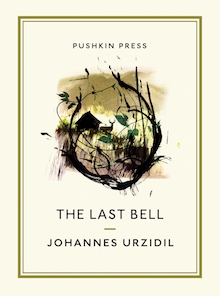 The Last Bell by Johannes Urzidil, translated from the German by David Burnett (Germany, Pushkin Press)

Five stories culled from disparate parts of a dead author’s career seems an unlikely candidate for the Best Translated Book Award, but nothing about The Last Bell’s publication seems likely. It is the first-ever English translation, thanks to David Burnett, of a member of Kafka’s Prague circle, a writer Max Brod called “the great troubadour of a Prague forever lost,” who somehow himself got lost through passing decades despite all these years living right under our noses: Urzidil was a Czech immigrant in New York, continuing to produce enigmatic stories in German which earned him a small following there if nowhere else. With the lure of a time capsule or buried treasure, we are drawn to Urzidil, curious to see if this forgotten writer will live up to our enticing idea of him.

Living up to expectations is hard, especially with Kafka as a point of comparison. There’s nothing automatic about the creative spark, and each writer’s art must live or die by its own merits; so while Urzidil’s stories sometimes incorporate surreal elements owing something to Kafka—the talking pickles and reanimated painted woman in “The Duchess of Albanera,” for example—what makes each of the stories in The Last Bell live is that they contain small miracles of empathy, of Urzidil inhabiting a strange mind and illustrating the fears, hopes, and moral conundrums experienced therein.

In the title story, Urzidil somehow manages to turn a hammy below-the-stairs servant comedy into a parable about the choices non-Jewish civilians made during the Holocaust. The story turns on empathy—the tragicomic fact that Marska alone can feel compassion for people like her absent employers, who hastily fled the country as the Nazis started rounding up Jews. Her sister Joska has no such sentimental attachments; she has no qualms about plundering oppressed people. Marska cannot revel in her employer’s riches: “How can it be that something sickens you and yet you guard it like a treasure?” Marska’s position in the class system may have been a subordinate one, but it imbued her with a rigid sense of morality; money doesn’t belong to you if you didn’t work for it. Empathy for her Jewish landlord drives Marska as the story reaches its terrible crisis, and she asks her absent Master (a writer, it so happens!) for empathy in the story’s powerful denouement:

I wonder if he’ll write it down the way I lived it, and everything that went through my mind while it happened? I wonder if he’ll be on my side when they summon him as a witness at the Last Judgment?

Yet empathy in Urzidil’s stories is never divorced from moral instruction. One may take seriously Seigelmann, the travel agent in “Seigelmann’s Journey” whose rich imagination belies the fact that he’s never left his charming little town of Birkenau, without believing that such self-deceits as he engages in are harmless. What justifies placing him in Birkenau, symbolically turning this lovelorn travel agent into a future Nazi, other than obscure, elemental longings Urzidil points to in the soul? Empathy is how Urzidil gets at these springs of motivation, a subject necessary to broach to understand the irruption of racial hatred and violence.

A logical progression drives the hostile behavior of the villagers on the right and left banks of the river in “Where the Valley Ends,” these Bohemian Hatfields and McCoys. Yet Urzidil’s narrator abstracts himself from the conflict—what seems a quaint allegory for industrialization, national hatreds, and war—and describes the quarrel between these two factions in a small village from the perspective of Mother Nature, seeing the root of conflict not in terms of one grievance or racial hatred, but more elementally as part of humanity’s unfettered desire to create meanings and control Nature. For Urzidil, calamity arises from such uncontrolled longings—the strength that is actually weakness. When the protagonist in “The Duchess of Albanera” acts on a moment of daring and steals a painting of the said Duchess, the Duchess in the painting comes to life to tell him he acted not out of courage but out of cowardice, because he was afraid of women, so he needed to steal an inanimate one. Urzidil’s uncanny ability to unearth moral strength, and Burnett’s ability to render that strength in English, in one character’s diminutive position and weakness in another character’s act of daring show exceptional insight, and demonstrate why The Last Bell deserves this award.