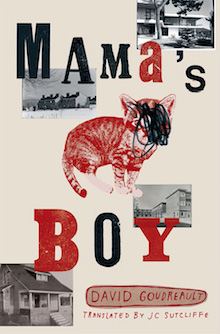 This incredibly fun novel is a first-person account and confession by the unnamed protagonist, who offers his side of the story to what he claims is the jury for his own trial. In the opening page he lets the reader know:

“In my memory, in my mind, this is what happened. It’s my truth and that’s the only one that counts . . . I’ll let you be the judge. I’ll judge you too, in due course.”

What drives this book is the shocking, twisted, and ultimately hilarious worldview of its narrator. The story revolves around the protagonist’s quest to find his suicidal mother, from whom he was taken at a young age by Social Services. He intends to reunite with her, and genuinely believes that this reunification will be life-altering and will somehow drastically improve his life. Hopping from foster home to foster home, the narrator develops a misplaced sense of empathy, a partial misunderstanding of social cues, and a firm belief in his own righteousness. He is terrifying, a delinquent, a stalker, constantly on amphetamines and on the verge of a violent breakout that keeps the reader on edge. At the start of the novel he logs into the email account of his girlfriend (of just three weeks) after she starts to become distant, only to grow jealous of old love messages she’d written to an ex. He then decides to kidnap one of her cats and write her a letter:

“As a postscript, I explained that I was taking her cats because she cared about them more than she cared about me, until she decided to put more effort in and not contact Gregory anymore.”

I won’t say what happens next, but it does not end well for the cat. Mixing with moments of sweetness, uncompromising shock, violence, and humor, the reader’s own (hopefully) more healthy perception of reality becomes a character in and of itself, both enjoying and struggling with Goudreault’s protagonist.

The boldest aspect of Mamma’s Boy is the deep understanding of psychological normality and its absolute violation in the character construction of its protagonist, without ever falling into the realm of psychosis, the delusions of the protagonist allow him believe things for which he has no evidence. Unreliable as the narrator may be, awful and violent, his journey is one that absolutely captivates you and makes you want to turn the page. The pain of a young maladapted adult and the evidence of how social systems fail to notice or appropriately assist those that may need it most are issues indirectly central to the story. He believes himself to be extremely intelligent and handsome, handing out advice such as “You don’t show up to visit someone empty-handed. You need flowers or a weapon, it’s well documented,” and doing things such as “I drank too much, smoked too much, fucked Nicole again. I didn’t even want to, but when it’s there for the taking . . .”

Mamma’s Boy is dark and twisted, but it is also incredibly amusing and raw. David Goudreault is a Quebecer writer who won the first World Cup of Slam Poetry and has received awards such as the Grand Prix littéraire Archambault for this very novel.

One response to ““Mamma’s Boy” by David Goudreault”